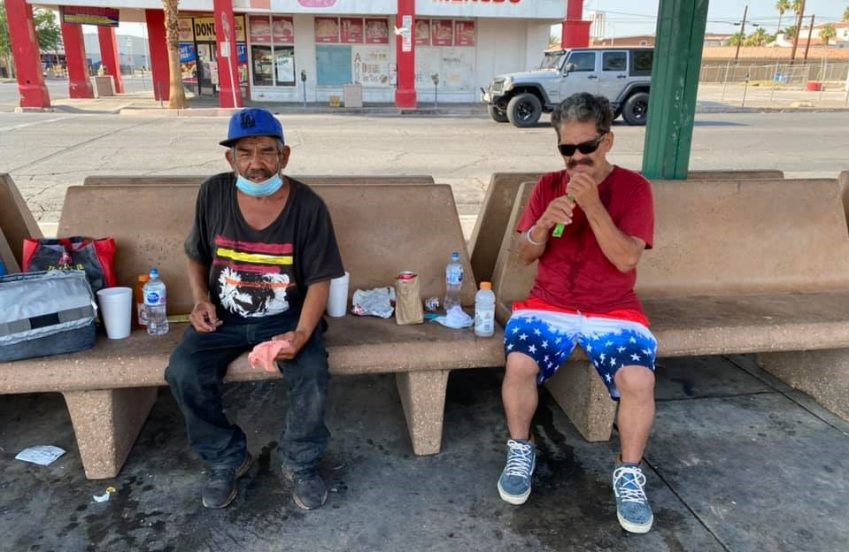 Two homeless men seeking shade at the bus stop on Third Street and Paulin Avenue in Calexico enjoy much-needed water, cold Gatorade and ice pops from the Brown Bag Coalition during the first of the summer’s water runs done by Maribel Padilla and her volunteers when the temperatures reach and exceed 115 degrees. Temps reached 119 that day in mid-June, she said. A homeless man died from the heat on Friday afternoon, July 9, after falling ill on Paulin Avenue. | PHOTO COURTESY OF MARIBEL PADILLA
Home
Regional News
Share

CALEXICO — As a third wave of 115-plus degree temperatures set in on the Imperial Valley late in the week, a homeless man who goes by the name “Cuba” on the streets of Calexico died from the extreme heat.

This is what some homeless advocates and city officials feared would happen in the absence of a place to go to hydrate and get out of the direct sun for the Valley’s homeless population — Calexico’s in particular.

“When I was out on my water run, the homeless men told me that the ambulance had taken him earlier from the (Valley) Orthopedic Clinic parking lot,” said Brown Bag Coalition co-founder Maribel Padilla, who late Friday afternoon, July 9, had started her organization’s third series of water runs so far this summer, something she does when the forecast predicts temps of 115 or above.

“I went by there and only his cart had been left behind. I asked the chief of police (Gonzalo Gerardo) and he confirmed it,” Padilla said.

It’s uncertain whether the man’s next of kin has been notified, so Padilla did not reveal his name other than to say he goes by Cuba.

Some of the details surrounding Cuba’s death were not immediately available, but it was known that the man was found unconscious and unresponsive on the curb in front of an undisclosed business in the 200 block of Paulin Avenue, according to Calexico fire Capt. Arnold Rivera.

The homeless man, who was thought to be in his mid- to late 30s or early 40s, Rivera said, was found a few blocks northwest from where Padilla said his shopping cart was located. Valley Orthopedic Clinic is in the 300 block of First Street.

There was no question that the man had “severe heat stroke symptoms,” Rivera said, and he was transported to El Centro Regional Medical Center, where he died.

Fire crews were called to the area at 3:15 p.m. and flagged down by people as they arrived.

“The homeless, it seems like it affects them more, because they are out there all day,” Rivera said. “They don’t have proper shelter, or food, nutrition, and liquid.

“This weather, it’s dangerous for anyone right now,” the captain said, adding there has already been plenty of heat-related calls geared toward the homeless this summer, and Rivera believes fire crews are averaging at least one per day.

It’s one of the reasons Padilla is out there at the most extreme times, gathering donations for cases of room-temperature bottled water (the best for hydration, she’s been told), cold Gatorade, and the cold, wet rags for their heads that they ask for. Padilla did these runs in mid-June when the temperatures hit 119 degrees for the first time, and again at end of the June.

Through 8 p.m. Monday night, July 12, the National Weather Service has issued an excessive heat warning for the region that includes most of western and southwestern Imperial County, the Salton Sea area, and both Joshua Tree National Park and Chuckwalla Valley, where temperatures up to 122 degrees were expected.

In all, the region has been beset with heat-related problems, including several scattered power outages on the electrical system as Imperial Irrigation District is in the midst of a “Conserve Alert,” also through Monday night.

Meanwhile, although the Calexico Community Center has reportedly been a “cool center” for the city for some time, it had not been advertised as such on any social media site until around 5 p.m. Friday.

Either way, that would not have helped Cuba and likely wouldn’t realistically benefit any of the city’s homeless population.

“They’re not going to go there, it’s too far away,” Padilla said. “And they really won’t go to places like that because of the rules.”

The community center is located at 707 Dool Ave., several blocks northeast of downtown.

Council member Raul Ureña said he wasn’t made aware that the community center was a site until Friday, but it’s a location he has an issue with due to the fact that there is no water provided there and it is not something the city’s homeless would likely use.

Because so many of the Valley’s chronically homeless have mental health and substance abuse problems, many are often not welcome in the traditional cooling center settings, and Ureña believes places similar to the city of San Francisco’s “sobering centers,” where homeless individuals who might be under the influence are still welcome, would be useful in this circumstance.

At the very least, he said on Saturday morning, a couple pop-up tents and several cases of water near the downtown could help keep the homeless safe during these extreme temperatures.

All things considered, he does not believe the city did a good job in getting its message out that a cool center is in place, especially with the homeless. The organizations that work most closely with these populations in Calexico, like Brown Bag Coalition and Black Lives Matter Imperial Valley, he said, were not told of the community center as a potential heat shelter.

“It’s not like they’re on Facebook anyway,” Padilla added. “Some of them have phones but come on.”

Actually, up until Friday, Calexico had no advertised cool center on any materials distributed or promoted via social channels by the Imperial County Public Health Department, which has been heavily messaging the cool center concept and locations for several weeks.

“There has always been an effort to have at least one cool center in each city and especially in the outlaying areas of the county,” Public Health spokesperson Maria Peinado stated in an earlier email.

Although the county encourages each city to organize its own cool centers for their residents, it should be noted that there are no funding sources for the participating agencies or organizations.

“… (Those) that offer their locations as cool centers do so on a voluntary basis. Each organization covers the cost of the air conditioning, the staffing, and any other resources that are made available to those using this service,” according to Peinado.

Cool Centers For All

The push to get the message out about the county and various cities’ cool centers and “hydration stations” came in a rush Friday afternoon, especially as some significant power outages set in across the region.

Around 6 a.m. Saturday morning, all power had been restored to Brawley residents.

The city of El Centro experienced some scattered outages as well on Friday, but on a far smaller scale.

El Centro had previously established “comfort stations,” where some level of shade and access to drinking fountains were available at City Hall on Main Street from 8 to 5 p.m. Mondays through Fridays and at Bucklin Park and city’s transfer terminal on State Street near Seventh Street.

Since 2006, the county has been proactively establishing cooling stations, and more recently, hydration centers, or locations providing water, according to Peinado.

But access this year appears to have been somewhat stymied by the continued COVID-19 pandemic.

Calexico, for one, used to have two fully operational cool centers, one located in the Camarena Memorial Library and one inside the waiting room of the Clinicas de Salud Del Pueblo clinic. However, when the pandemic began in early 2020 certain new guidelines and mandates on how businesses should operate in indoor settings resulted in many places closing their doors to the general public, including those places that in the past had operated as welcoming cool centers.

Ureña expressed his disappointment with the options afforded to some of the most vulnerable community members and said he believes the situation to be a reflection of budgetary mismanagement. The city on June 23 passed a balanced budget for fiscal 2021-2022 that started July 1, but he said on Saturday morning it was a budget passed that he feels did not provide some needed services.

“Calexico historically, like with everything, relies heavily on nonprofits instead of investing in cities services,” Ureña he said in an earlier interview about cool centers in Calexico. “This year, because our nonprofits were unable to open due to COVID, the city of Calexico did not have the facilities for this service.”

While the community center is back in rotation for that service, the freshman council member said on Saturday it is not providing cool water.

It was not immediately available whether there is a drinking fountain inside the community center, which due to the city’s ongoing cost-cutting measures is open every other Friday and Mondays through Thursdays.

The county Public Health Department’s most updated list of cool centers and hydrations stations lists “hydration stations” in Calipatria, Heber, Palo Verde, Ocotillo and Holtville, water/“comfort stations” in El Centro, Brawley, and Imperial, and “cool centers” (implied without access to water) in Niland and at the Imperial Valley Desert Museum in Ocotillo.

On Friday, when Padilla went on her water run, it was not just in Calexico but to El Centro as well. The problem is one that is spread around the county and centralized in the cities, where transients find any piece of ground they can, under even the most extreme circumstances.

Along for the ride was El Centro City Council member Tomas Oliva, who called Padilla to donate an ice chest of cold water and offered to help with the distribution.

They started in south El Centro, arrived in Calexico around 5 p.m., which is when she learned about Cuba, and finished off the evening in northwest El Centro. In total, she distributed water to about 48 individuals she said on Saturday morning.

Brown Bag volunteers expected to distribute to about 35-40 people on Saturday evening in Calexico only and another 40-plus on Sunday through both cities.

With the heat expected to still be at dangerous levels on Monday, Padilla has arranged to drop off room-temperature bottled water expressly for the homeless at Calexico Wellness Center’s Thrift Store at 406 E. 2nd St.

Already housing the community refrigerator for the needy and hungry that had formerly been outside the Hope Café & Creperie on East Second Street, Padilla said she would spread the word among the homeless over the next few days about the water available during the thrift store’s normal business hours, which are 10 a.m. to 6 p.m. Mondays through Fridays.

Friday’s death was sad and speaks loudly to a systemic problem facing not just Calexico but most of California, yet it was not unexpected.

“Every summer we lose one or two. I don’t know why the city can’t open one of the empty buildings down there (in downtown),” Padilla said.

Calexico fire Capt. Rivera, who oversaw the response on Friday afternoon, said this is becoming a coming occurrence for all the first responders in Imperial County due the homelessness crisis in the state.