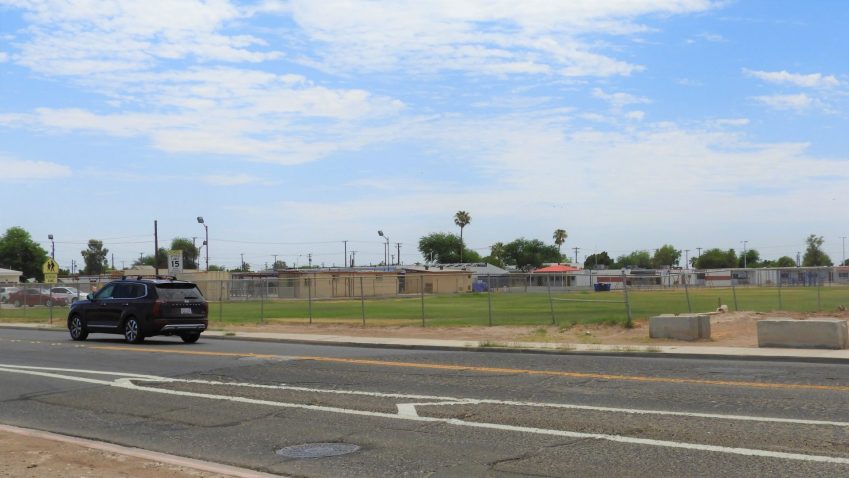 An empty field is seen to the west of the Imperial city pool, facing south. The city has applied for an $8.5 million state parks grant to turn the entire lot (and one of the east side of the pool) into Townsite Park, a community space that includes a new competition-level pool, skatepark, picnic areas and developed green space and basketball/volleyball and tennis courts. The courts would be in the open area on the right. The Imperial City Council on Wednesday, July 7, approved a zone change for the property from “residential” to “open space” to facilitate the all-purpose, general-use park project. | MARCIE LANDEROS PHOTO
Home
Regional News
In Regional News

IMPERIAL — Citizens have helped to design it, schoolchildren have put in their two cents to name it, and the community has been engaged in the dreaming up of Townsite Park from the start.

The process has been part of an $8.5 million state grant that would turn the land around the city pool off West Barioni Boulevard directly south of the high school’s track and football stadium into a community park that would be a focal point of older Imperial.

“This park is a 100 percent community-driven project,” said Tony Lopez, parks director for the city of Imperial. “It is just the beginning of the process. If awarded, we will need the community to help detail out the amenities within the phases.”

Although the city won’t know until the end of the year whether it has done enough to get the competitive grant, the planning aspects of the project are full-steam ahead.

A zoning change to convert the Townsite Park project location from “residential” to “open space” to facilitate the development was approved by the Imperial City Council after a public hearing on Wednesday, July 7.

The city of Imperial is proposing to utilize the property, which shares a lot with Ben Hulse Elementary School to the south, for a more general recreational use rather than exclusively for schools, so the zone change was required.

If the Statewide Park Program grant is approved, construction is expected to include a new competition-ready pool with LED lighting, grandstand seating, canopy shading, and a shower station, a skatepark, basketball/volleyball courts and tennis court, picnic and barbecue areas that include benches and gazebos, a new playground with a canopy shade, Americans with Disabilities Act-compliant walking trails surrounding the perimeter and connecting amenities, security LED lighting for park features and parking areas, and landscaping that will include drought-tolerant trees and shrubs on a drip-irrigation system.

The grant program is part of the 2018’s Proposition 68 Parks and Water Bond, and as part of the application process, community input had to be sought from the start.

Virtual town hall-style meetings last fall, as well as in-person community polling in September and a youth-focused idea session at a farmers’ market in October helped narrow down amenities sought and allowed participants to vote on four park configurations at one point. Students at Ben Hulse were pulled in during school hours, where the city asked for ideas through drawings and potential names.

“We had to get creative with our outreach with the many COVID restrictions, but we feel we’ve generated a concept that the community can be proud and take pride in knowing that they built it,” Alexis Brown, assistant Imperial city manager, said last week.

As inclusive as the process was, not all were pleased with the proposed park, and two residents let the city know as much on social media, as the public hearing was taking place and being livestreamed on Facebook.

Brenda Kay, a resident of Imperial, posted on the meeting’s live feed, “Going on record opposing this zone change and ‘proposed’ skatepark. As a resident directly across from this plan it will cause burden to the residents, not that we were asked …”

In another post, Kay questioned the city about logistics of the park.

“In your plans are working security cameras included? Additional security officers assigned to that area? We have enough noise and traffic in this area already, seems other locations might be better options, was that even explored?”

“Ms. Kay, other options were considered. We are excited about our partnership with the school district to address a long-standing issue with the Imperial Pool. We are looking forward to bringing this project to fruition and hope you’ll be a part of the process as we begin formal engineering and design.”

Kay was not the only resident to have issues with the city building this new park. Linda Kennedy Cooke, another Imperial resident, also commented.

“What about traffic mitigation? We cannot get out of Dahlia now! B Street is a hazard!”

The city responded to that concern as well, also via Facebook.

“Hi Linda, this is only the first step to this project. The parcel is currently zoned for residential housing. The action taken tonight (July 7) will allow the area currently used as the Imperial Pool to become (an) open space. There is much more planning to be done, including concerns you’ve voiced here, and we hope the community will participate in the process.”

Brown followed up after the meeting.

“We hope those individuals who have concerns over the potential impact of the project will join us in the next steps of the process. The community is the driving force behind the major features and support amenities. Our goal is to increase the quality of life and health equity of our community with access to open space, where people of all backgrounds and cultures can come together.”