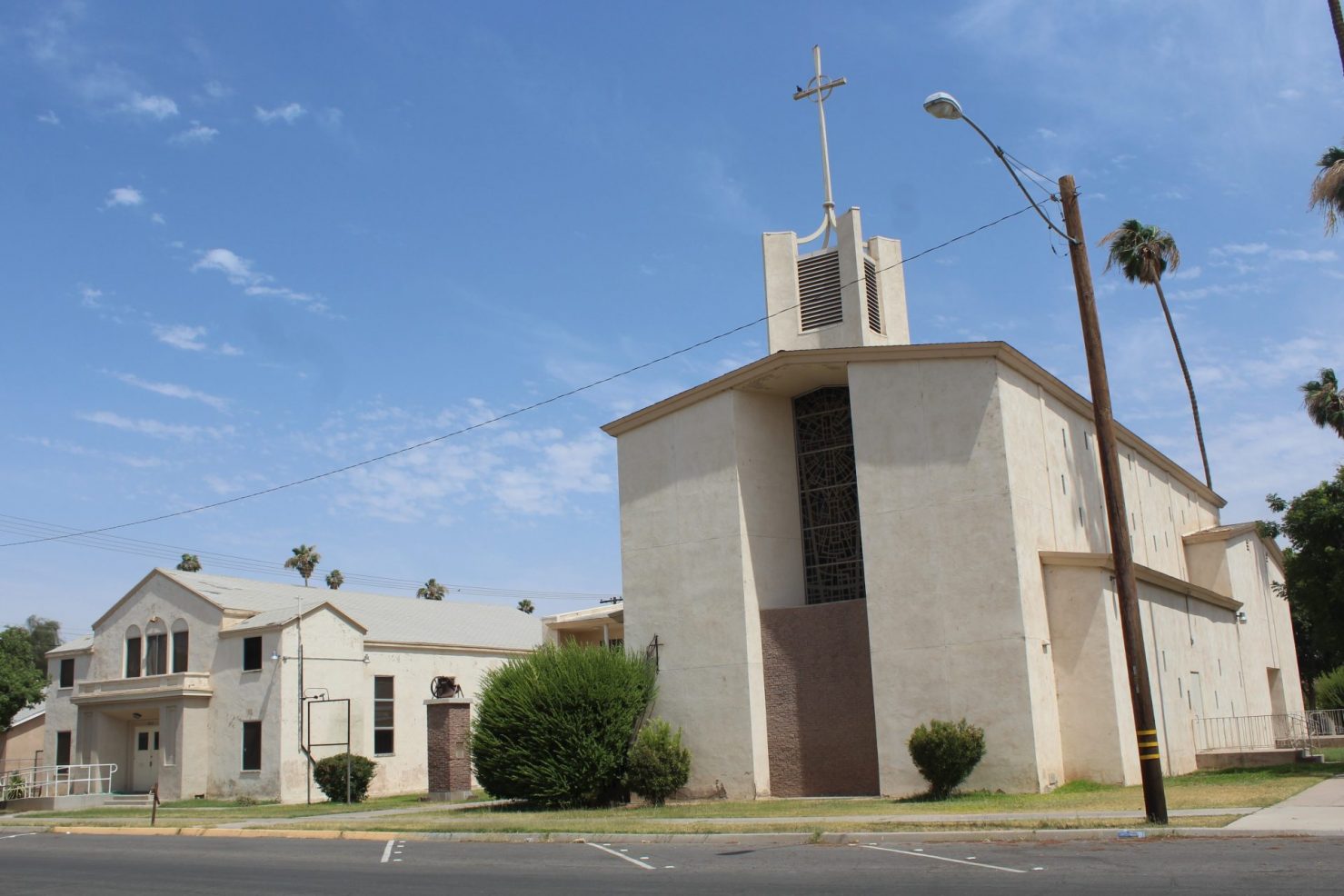 The closed United Methodist Church, located at 217 W. Seventh St., in Holtville will be reopened by the South District Union of the California-Pacific Annual Conference of the United Methodist Church as a welcome center for asylum seekers to the consternation of city officials and former local church members. The opening date is not yet known. | CATHI PHILLIPS LARIOS PHOTO
Home
Featured Stories
In Featured StoriesLocal News

HOLTVILLE — Controversy, confusion and uncertainty continue to surround a proposal by the United Methodist Church denomination to convert its closed Holtville church into a welcome center for immigrants that are being released into the county by federal immigration officials.

Part of that controversy was on display during the Holtville City Council meeting on Monday, July 12, where several residents spoke in opposition to the initiative during the meeting’s public comment session.

And even though a United Methodist Church official had contacted the city more than a month ago to disclose that the denomination was considering using its Seventh Street property to potentially house immigrants temporarily, the city remains uncertain about the extent of the plans.

Some confusion about the city’s zoning laws and whether they can be used to prohibit the proposed welcome center’s activities also appears to exist among some of the residents that are in opposition to the initiative, City Manager Nick Wells said.

To his knowledge, as long as the property is intended to serve as a temporary emergency shelter it’s allowed in a residential area, Wells said on Tuesday, July 13. Nor does the fact that the property is not currently being used as a church preclude UMC officials from using it for its intended purpose, he said.

“Whether we’re in favor (of the housing initiative) or whether it’s legally allowed are two different things,” Wells said. “That’s what we’re trying to get across to everybody.”

During his previous correspondence with a UMC official, Wells said that he had advised them that the city was not in support of the planned effort.

As it now stands, the UMC, through its South District Union of the California-Pacific Annual Conference, has plans to convert the closed church into a welcome center for asylum seekers that are released from custody into the county by the federal government.

To do so, it will partner with the Christ United Methodist Ministry Center of San Diego, the Safe Harbors Network, as well as local Methodist Church officials from El Centro and Calexico, and UMC officials on Tuesday provided new details into their plans for the now-closed property at 217 W. Seventh St.

Holtville resident and business owner John Hawk was among those who spoke out against the South District’s housing initiative during the City Council meeting on July 12.

When reached for further comment on Tuesday, Hawk said he was not opposed to immigrants coming to the United States, but said that current immigration laws appear to have been politicized and the process no longer remains fair.

“Now we’re trying to house those that have not followed the rules and have jumped to the head of the line,” Hawk said.

He took further issue with Holtville residents not having been given the opportunity to provide input to the South District, especially in light of the expenses that residents have incurred through the years to maintain the public amenities and infrastructure that the UMC housing initiative now wants to benefit from, such as water and sewer.

The church property reverted to the possession of the South District in March, following the settlement of a county Superior Court lawsuit that alleged the former United Methodist Church of Holtville congregation had not done enough to minister to its local Hispanic population.

Holtville resident and former Holtville Methodist Church member Becky Miller said that both she and her husband, Bob Miller, who had also spoken during the council meeting, were opposed to the South District’s plans.

Both had led past efforts at the former Holtville Methodist Church to provide donated food commodities to hundreds of less-fortunate Holtville residents on a monthly basis. They now continue those monthly food-distribution events at an alternate site as members of the newly formed First Church of Holtville.

“(The South District) talked about its mission support for the city and yet that (food distribution) wasn’t good enough for the district,” Becky Miller said Tuesday.

Miller said she was equally frustrated by UMC officials’ refusal to rent out the Seventh Street facility to the First Church of Holtville for its food distribution or for religious services. The denomination’s refusal seemed especially troublesome considering that former church members had raised the funds to rebuild the church sanctuary after a fire in the early 1960s, she said.

“We don’t agree with what they’re trying to do,” Miller said. “Kick us out to do this other thing.”

No date is set by when the proposed welcome center is expected to be operational, said Rev. Paige Eaves, of the UMC of La Mirada, on July 13. In the meantime, the South District remains committed to working with city officials to establish a respectful working partnership, she said.

An informational outreach session is planned for the community to help clarify the intent and purpose of the proposed welcome center, though a date has not been determined.

The housing initiative is an extension of the Methodist Church’s national Justice For Our Neighbors (JFON) program. As part of that program, the First United Methodist Church of El Centro hosted a JFON clinic where affordable immigration legal services were provided to low-income immigrants a few years back.

At the time, the El Centro congregation had also attempted to establish a shelter for migrants at its church, but the project didn’t come to fruition, for reasons that remain unknown to Eaves.

“I’ve definitely tried to get the facts on that so that we could learn from the experience,” Eaves stated in an email.

Part of the closed Holtville church’s refurbishment involves the installation of new plumbing, toilets, and laundry facilities. Church officials intend to apply for whatever permits are necessary to undertake the refurbishment to better accommodate asylum seekers and have been in discussions with city officials toward that end, Eaves said.

To date, the city has not received any building permit applications from the South District, City Manager Wells said. Such applications may not be necessary, depending on the denomination’s intentions, which still largely remain a mystery to the city, he said.

Wells further characterized the building as being in “bad shape,” and if the planned refurbishment called for new walls or plumbing, church officials would need to apply for a building permit, which is itself a long process.

Previously, a church official had inquired about the potential installation of a mobile shower trailer and a leach line to dispose of the shower’s grey water into the ground. In response, Wells advised them that such an action would be prohibited, he said.

“I don’t know what their intent is exactly,” Wells said. “It’s difficult to say whether they can do this, that or the other, because they haven’t said what they want to do.”

Once operational, the welcome center could potentially house up to 24 asylum seekers, said Rev. William Perkins, executive director of Christ United Methodist Ministry Center of San Diego, and founder of the Safe Harbors Network, a nonprofit dedicated to finding beds for refugees and asylum seekers.

Temporary housing at the shelter would be limited to women and children and exclude single adult males, Jenkins said on July 13.

He also sought to appease concerns that the housing initiative was being solely proposed by church officials from outside the county and would be exclusively operated by them, as well.

“This is going to be run by Imperial Valley,” Jenkins said, noting the planned involvement of church personnel from Calexico and El Centro. “Nobody’s coming in from the outside to tell people what to do.”

As for accusations that stakeholders were solely pursuing the initiative to make a profit, he indicated that under a current temporary housing program, hotels are being paid about $275 a day to house asylum seekers.

The South District’s effort in Holtville would net it a $12.50 per person per diem to provide wraparound services such as shelter, food, and case work. Those funds would be made available through the Emergency Food and Shelter Program (EFSP), which is administered nationally by United Way and locally by two EFSP boards, one in San Diego County and one in Imperial County.

“We will lose money,” Jenkins said.

However, the South District has applied for funding from the Federal Emergency Management Agency to temporarily house the migrants. The district has yet to receive word if its application was approved. Even if its FEMA application is denied, the housing initiative would likely still go forward, Jenkins previously said.

Aside from housing asylum seekers, long-term plans for the church property include hosting religious services, food-distribution events, a clothing closet, and a weekly free medical clinic for uninsured individuals.

The proposed activities are aligned with the Gospel of Matthew, Chapter 25, Jenkins said, where Jesus instructed his followers to feed the hungry, clothe those without clothes and welcome those who are strangers.