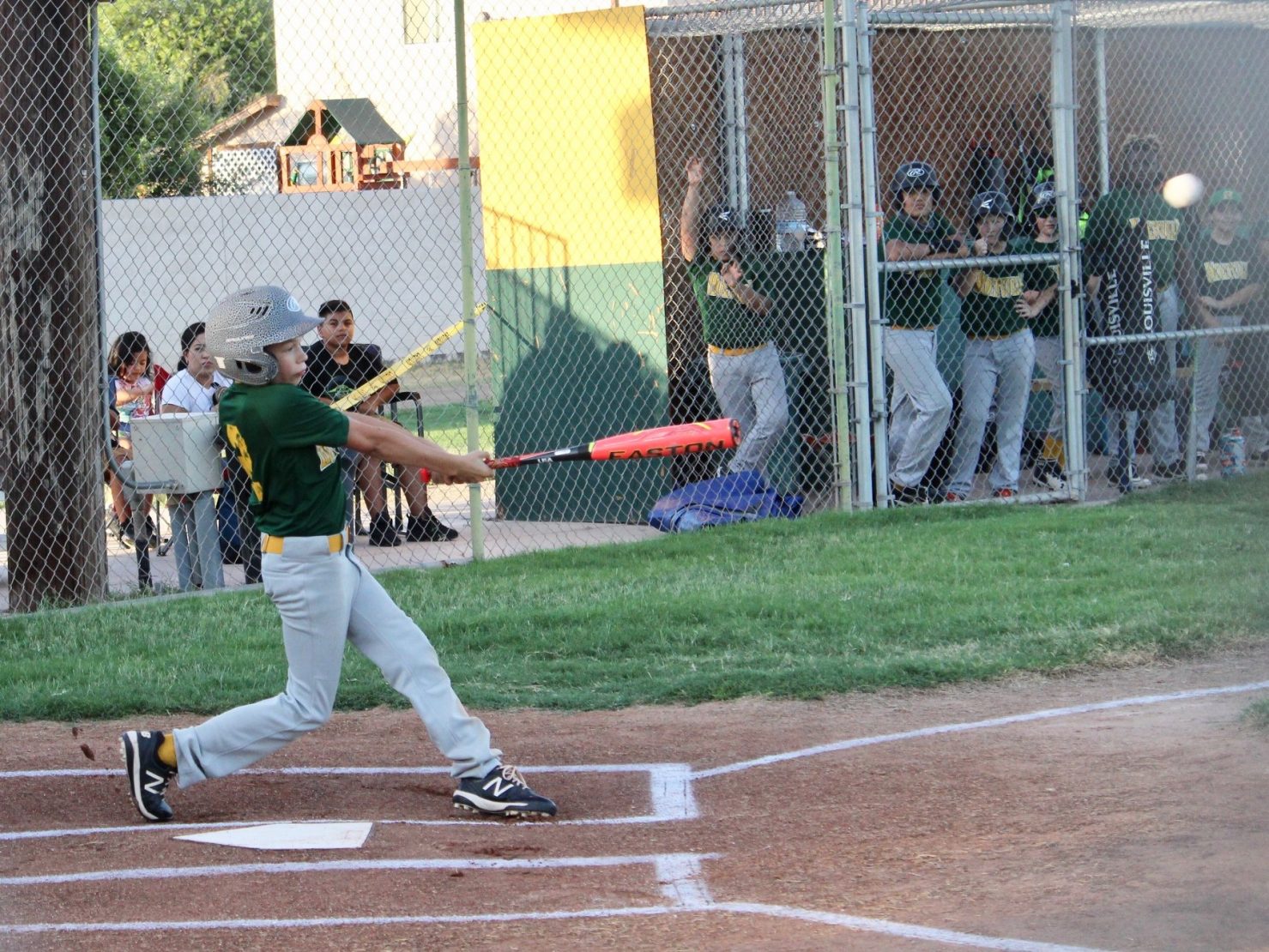 Holtville Little League 12-Under All Star Anthony Strahm gets a hit to lead off the game against Brawley in Holtville on Friday, July 9, in the District 22 All-Star Tournament. | CATHI PHILLIPS LARIOS PHOTO
Home
Sports
In Sports

EL CENTRO — The Little League District 22 12-Under All-Star Tournament comes down to a winner-take-all game after Holtville Little League upset El Centro, 2-1, on Tuesday, July 13, in El Centro to force a rematch for the district trophy.

Holtville Little League wasn’t able to beat El Centro Little League during the regular season and lost to El Centro in the championship of the District 22 Tournament of Champions.

In the semifinals of the All-Star Tournament, Holtville again lost to El Centro, 11-1, knocking the team to the loser’s bracket. Holtville made it back to the championship series and was able to force a final on Wednesday, July 14, after the 2-1 upset.

The results of Wednesday’s game were not available by our print deadline. See the story online for results.

“They (El Centro) are a really good team and they had been blowing us out of the water this season,” said Orlando Aguirre, coach of the Holtville All Stars. “Our kids went out there and played their hearts out and it’s good to see how far they’ve come since the beginning of the season.”

The pitching of Derrick Strahm was the key to Holtville’s win as he was able to keep the El Centro hitters off balance with his control and his off-speed pitches. He finished the night with seven strikeouts.

“Derrick had really good control with his pitches tonight and they just weren’t able to hit him,” Aguirre said.

Holtville took a 1-0 lead in the first inning when Zavien Aguirre tripled and scored on a passed ball. Holtville increased the lead to 2-0 in the fourth after Issac Jimenez reached on an error then advanced to second on a fielder’s choice. Anthony Strahm delivered the RBI single to drive in Jimenez.

El Centro scored its run in the fifth inning to make it 2-1, and then threatened in the sixth with two runners on base before Derrick Strahm was able to work out of the jam.

Holtville has had a busy District 22 Tournament, opening play with a 15-5 win over Sunbeam on Thursday, July 8. Zavien Aguirre delivered a three-run homer and had a two-RBI hit that ended the game via the 10-run “mercy” rule.

On Friday, July 9, Holtville hosted Brawley and pulled out a 5-3 victory behind the pitching and hitting of Anthony Strahm.

The win advanced Holtville to the semifinals where it fell in El Centro, 11-1, on Sunday, July 11, pushing the Holtville team to the loser’s bracket where it met Imperial on Monday, July 12, in Imperial.

Holtville was able to beat Imperial, 10-0, getting a complete-game pitching performance from Drew Kellum. Braxton Buscaglia and Anthony Strahm had doubles to lead the Holtville offense and Derrick Strahm got a bases-loaded walk to finish the game via the “mercy” rule after four innings.

That win put Holtville in the championship series against El Centro.

Whichever team is victorious in the championship game will advance to be part of the Little League Section 7 tournament that will be hosted in the Imperial Valley and feature teams from the different districts around San Diego.

Aguirre is the coach for the Holtville All-Stars and Mitch Kellum is the manager.