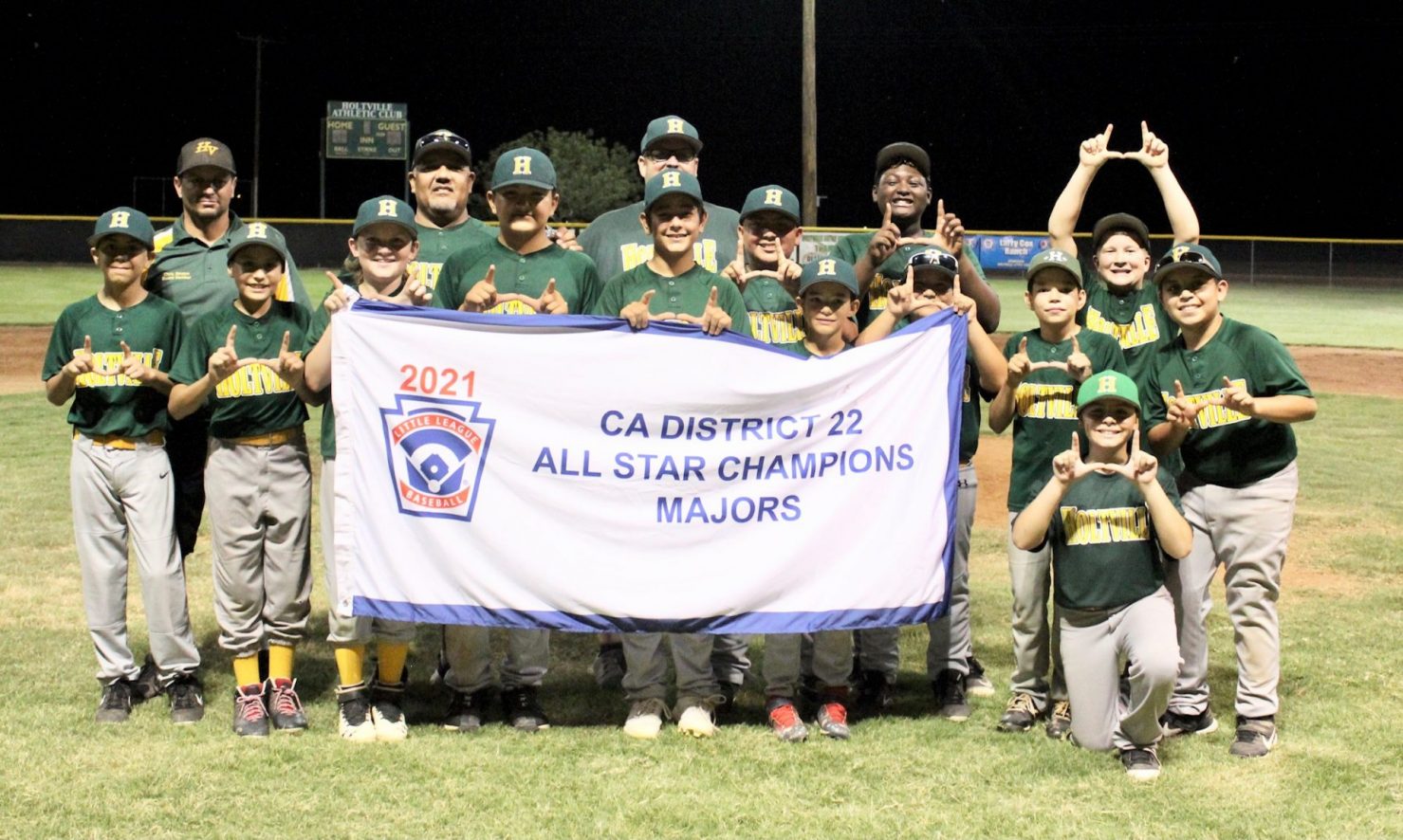 (This story was updated on Monday, July 19, with the weekend’s Section 7 tournament results.)

HOLTVILLE — For the first time in 68 years, Holtville Little League’s 12-Under All Star Team is the District 22 champions.

Little League was founded in 1947 and not since 1953 had a Holtville 12-Under team win the District title until Wednesday night, July 14, at Mack Park here when Holtville defeated El Centro, 15-6, to claim the title and earn a spot in the Section 7 Tournament.

Holtville had to defeat the power-hitting El Centro squad twice to claim the championship, getting a 2-1 nail-biter on Tuesday, July 13, at Frazier Field in El Centro and then breaking open a 6-6 game on Wednesday, July 14, with nine runs in the sixth inning to get the victory.

“That El Centro team is good. They were blowing us out this season,” said Mitch Kellum, Holtville’s manager. “But our kids are all heart and they never say ‘die.’ They will battle until the final out.”

Wednesday’s game was a see-saw affair with Holtville jumping on top 1-0, then falling behind 3-1. Holtville tied it 3-3, then fell behind 4-3 for a couple of innings before an eventful fifth inning ended with the two teams tied, 6-6.

With Holtville as the visitor in its home park, the squad was able to be patient at the plate and scored nine runs on just three hits in the final inning, taking advantage of three hit batters and four walks as the El Centro team was forced to dig deep into its pitching staff.

Holtville’s Anthony Strahm batted twice in the inning and had two hits and three RBIs, while George Ochoa also had a single and RBI.

Nate Hulsey got the win on the mound for Holtville, coming in to pitch in the fifth inning in relief of Strahm. After a shaky fifth inning, Hulsey was able to retire El Centro in order in the bottom of the sixth to seal the win and ignite the celebration.

“That first inning I pitched was definitely stressful,” Hulsey said. “But after my team got the big lead going to the last inning I was a lot more confident and was able to focus on just throwing strikes and getting outs.”

Ochoa was a key to Holtville’s three-run fifth inning when he delivered a bases-loaded double to plate two runs.

“What’s been great is to see this team improve every day. To see them come together and gel as a team has been fantastic,” Kellum said. “Coach Orlando (Aguirre) and I have been with most of these kids since T-ball and to see what they did the last two nights has been incredible.”

After winning the District 22 title, Holtville’s All Stars took part in the Section 7 tournament with three San Diego-area Districts.

Holtville faced off against Fletcher Hills Little League on Saturday, July 17, falling to the San Diego-area team 14-1. The loss put Holtville into the loser’s bracket where they met Spring Valley Little League on Sunday, July 18. Holtville couldn’t get its offense going in the second game and fell, 10-0.

Next
Dead Period is Calm Before the Storm for Athletics