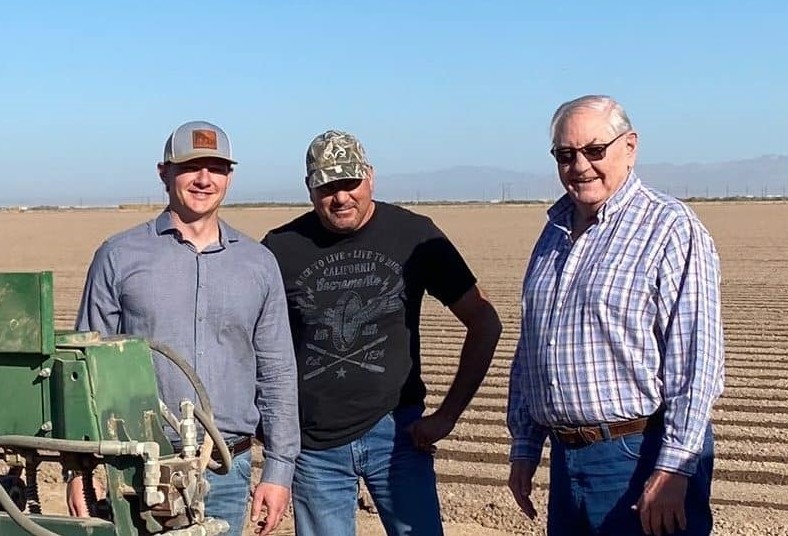 In agriculture, you reap what you sow, and that mentality has paid off for Jim Watte of Brawley, who came from a farming family but decided to follow a different path as a young man.

Watte got his start working in the stock room of a California grocery store. After a few years of working his way up to manager, he decided the corporate life was not for him, and returned to his roots in farming to start his own operation in the Imperial Valley.

In farming, nothing is guaranteed, including your crop. Watte has had crops wiped out by a hurricane conditions and a few years of bad yields. However, he didn’t give up, and today he farms 2,000 acres of alfalfa and Bermuda grass alongside his son, Jay Watte, and two loyal, longtime employees, Danielle Gonzalez and Sergio Mexia.

Gonzalez has been working for Jim Watte for five decades, managing the irrigation for Watte’s operation and being an integral part of daily life on the ranch. When Watte had son Jay, it was Danielle who helped train him and became an uncle-like figure to the younger Watte.

“I learned everything I know about irrigation from Danielle. He taught me how to irrigate and that each field is different in terms of how much water it needs,” Jay Watte said.

Today, Gonzalez is mostly retired but still jumps in to help the family when needed.

“Danielle is just a part of our family,” Jay Watte said. “He has a 50-year history with our family, and we’ve been there for each other through tough times and celebrations. My dad stayed by Danielle’s side and helped him with funeral arrangements when his wife passed, and Danielle was at my wedding. He’s much more than an employee, we consider him family.”

Sergio Mexia is another longtime employee of the Wattes.

“Sergio arrived at our farm a year before I was born, so he’s been in my life since the day I was born,” Jay said. “As a kid, I was always on the ranch, and when I was younger, he saved me from numerous mishaps, including nearly falling off a tractor.”

Mexia came from Mexico and knew little English when he started farming at the Wattes’ operation at age 17. Through the years his responsibilities and role has grown, and his expertise and dedication to farming is evident to the Watte family.

“When I want to try something new on the farm, I always ask my dad what he thinks … and then I ask Sergio if it can be done,” Jay Watte said.

Through his work with farming, Mexia was able to buy multiple homes, raise three daughters, who went on to graduate from college and make a comfortable life.

“I think a lot of people don’t realize, that farm work allows many immigrants to our country the ability to obtain the American dream,” Jay Watte said. “What other field can you go into that requires no experience and no language barrier, and the opportunity for upward mobility?”

The Watte land, and the men who work the land, has not only reaped an abundance of crops for customers over the years, it has allowed multiple families to live the American dream. And much like many California farming stories, the legacy will continue with future generations.

“I recently started my own family, and I expect my little girl will be out in the fields with me, helping me fix irrigation pipes and working with Sergio,” Jay Watte said.

(This story was edited slightly for style and formatting from its original version, which first appeared during California Farmer and Farmworker Month in October 2020 on California Grown, an agricultural marketing website that is part of the Buy California Marketing Agreement. Story and photos used by permission.)

Previous
ID of Man Shot by Calexico Cop is Released