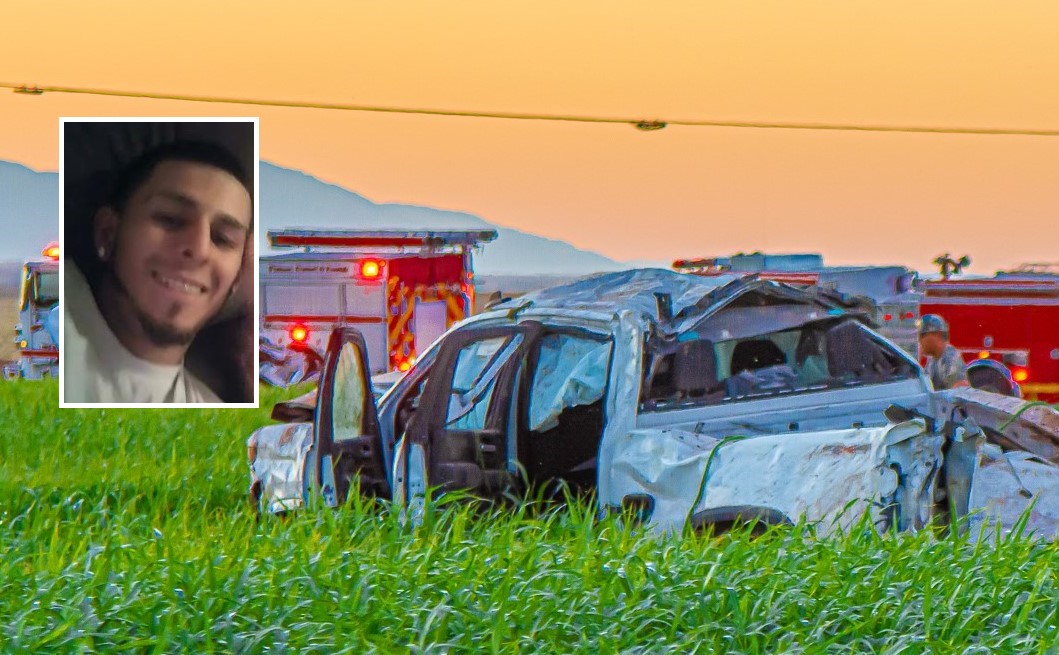 Andres Orozco, 27, of Seeley sustained a “traumatic brain injury,” according to his attorney, after the CMC Harvesting Inc. pickup (shown) he was traveling in collided with an Imperial County Sheriff's Office vehicle. The pickup rolled into a field south of Aten Road and west of Forrester Road on June 26. The deputy was killed and Andres and five coworkers in the pickup had minor to serious injuries. | CAMILO GARCIA JR./ LILIANA RUIZ PHOTO ILLUSTRATION
Home
Public Safety
Share

A Seeley man hurt in the traffic collision that killed a local sheriff’s deputy and left a total of six survivors with various injuries reportedly sustained a “traumatic brain injury” and is transitioning from the hospital to a rehabilitation facility, according to an attorney retained by his family.

Andres Orozco, 27, who was ejected from his company’s work truck into a field near the intersection of Aten and Forrester roads on the evening of June 26 and pinned beneath the vehicle, was still recovering in Desert Regional Medical Center in Palm Springs last week and is awaiting a bed in a rehab center, said attorney Michael S. Carrillo during a brief interview.

Orozco appeared to be the only individual in the work truck who was seriously injured in the June 26 accident that is the focus of an ongoing investigation by the California Highway Patrol’s highly specialized Multidisciplinary Accident Investigation Team from the San Diego-area Border Division.

“Six people’s lives have changed forever and a traumatic brain injury to Andres Orozco,” said Carrillo, of Carrillo Law Firm of South Pasadena, after first addressing the attention that has been centered on the death of Imperial County sheriff’s Deputy Anthony Redondo.

The passing of 25-year-old Redondo, who was buried July 10 in El Centro, was considered to be a death in the line of duty, as he was responding to a call for service. Witnesses at the scene, both independent and connected to the company the survivors worked for, reported that Redondo’s marked late-model sport-utility vehicle, had driven through the stop sign and into the path of the work truck carrying a crew from CMC Harvesting Inc. of El Centro.

Carrillo said on July 13 that his own interviews with occupants of a vehicle unrelated to the CMC crew on the road that evening confirmed the other accounts that have so far not been mentioned by investigating agencies or confirmed by law enforcement sources.

“I understand the dedications but he’s the one at fault here,” he added. “So, I think that once the truth comes out, once this case goes to trial, the public will understand that, yes, he was serving a role and duty as a uniformed police officer, but he caused this accident.”

Carrillo used the word trial, but the attorney said he has not had any contact with anyone from the Imperial County Sheriff’s Office nor had he started the process to submit any kind of claim with the county of Imperial.

About the only legal maneuvering that Carrillo confirmed has occurred has been to issue “preservation of evidence letters” to the California Highway Patrol to gain access to the information in the event data recorders presumed to be onboard the vehicles of both Redondo and the CMC Harvesting work truck now in possession of the MAIT investigators.

In the absence of knowing whether there was an onboard dash camera in Redondo’s vehicle, Carrillo explained that many late-model vehicles have what amounts to a “black box” found on an airplane, which he said records speed, braking, change of direction and other critical information usually in about a 15-second span leading up to an accident.

Both vehicles were later models that would likely have been equipped with the recorders. Although the official California Highway Patrol press release issued on June 28 about the crash did not provide the make and model of Redondo’s SUV, radio scanner reports and the CHP’s traffic incident page from June 26 identified the cruiser as a newer Chevy Tahoe.

The CMC Harvesting pickup, which was being driven by 33-year-old crew foreman Manuel Orozco of Seeley and Andres’ older brother, was a 2021 Chevy Silverado.

Accounts of the collision had Redondo heading west on Aten Road toward his call in Seeley, where there is a posted stop sign at the intersection. Manuel Orozco was driving the CMC pickup with a fully loaded trailer carrying diesel fuel and a compressor south on Forrester Road heading toward the CMC shop.

Redondo reportedly drove into the intersection in front of Manuel Orozco and his five passengers. Manuel’s wife, Liliana Ruiz, told this newspaper previously that Manuel attempted to brake but it was too late.

Carrillo said he interviewed the passengers of a car two vehicles back from the collision who confirmed that account and also confirmed what others reported, that the Sheriff’s Office unit did not have any sirens or light bars flashing when the wreck occurred.

“There’s immunities for lawsuits when there’s lights and sirens on, but as far as I’m aware, there were no lights and sirens on at the time, even though he was responding to some sort of call,” Carrillo told this newspaper. “But his black box in the sheriff’s deputy vehicle should indicate as well, whether he did or he did not.”

As far as Andres Orozco’s condition or severity and nature of injury, Carrillo declined to share a great deal during the interview last week but indicated that 27-year-old Andres was no longer in the intensive-care unit and was no longer using a breathing tube. Still, Carrillo said Andres was waiting for a bed to come open at a rehab facility.

Although Carrillo did not share the extent of Andres’ brain injury, about a week after the accident, when Andres was still in the ICU with an endotracheal breathing tube, Liliana Ruiz told this newspaper that Andres couldn’t remember things and was being kept sedated because he was fighting to remove the tube.

The last time Ruiz was contacted for an update on Andres’ condition, all inquiries were forwarded to Carrillo.

Information on the condition of the other occupants of the work truck was not immediately known, although Carrillo does not believe any of the others to have been injured to the degree of Andres Orozco.

Manuel Orozco, who is also represented by Carrillo, received a few bumps and bruises in the accident, which Ruiz previously said had mostly been bruising from the seat belt.

The evening of the collision, Andres Orozco and co-worker Jesse Ruelas, 31, of Imperial were both airlifted to Desert Regional. Ruelas sustained a broken shoulder and broken elbow, Ruiz said.

Twenty-seven-year-old Sergio Ruelas and 18-year-old Luis Amafillas, both of Imperial, sustained minor injuries and were transported to El Centro Regional Medical Center by ambulance, according to the Highway Patrol.

Trent Cox, 18, of Imperial was taken to Pioneers Memorial Hospital in Brawley by ambulance for minor injuries, the Highway Patrol reported.

“These people, at least the two that I represent, they have families, they have kids at home. Andres is not able to see those kids and spend time with his family and do the normal things that he should be doing …,” Carrillo said.

“Nobody’s asking about the families, whether they’re suffering, whether (Deputy Redondo) did wrong. I mean, it’s just really shocking to me, because six families are affected and nobody has asked those questions,” the attorney added.

To be fair, people have asked how the wreck survivors have been doing. It’s a question asked on social media, in stories in this newspaper, and elsewhere, yet due to the nature of the investigation, the reluctance of the victims to be interviewed and the potential for litigation, the Sheriff’s Office nor the Highway Patrol have commented on the scenario around how the accident occurred.

Andres Orozco’s injuries appear to be the worst because the circumstances around his ejection from the work truck were the worst, according to prior interviews with Ruiz.

Andres had apparently been sitting in the front of the truck between Manuel and the passenger, and was not wearing a seat belt, Ruiz indicated. When the collision occurred, Andres, like several of the vehicle’s occupants, was ejected from the rolling pickup.

The CMC truck landed on top of Andres, Trent Cox, and possibly one other occupant. It’s unclear if others were pinned beneath. A second CMC crew that was following behind Manuel’s truck as they returned from a job site, rushed to the aid of their coworkers, using shovels to dig out the men who were trapped.

Ruiz said that Andres was not breathing, and Manuel had to perform cardiopulmonary resuscitation on his younger brother. As Andres lay in the ICU, Ruiz said doctors told the family that Andres had water in his lungs, had been placed on the breathing tube and sedated for his own protection.

In terms of the crash investigation, the local Highway Patrol has deferred to the Sheriff’s Office and the MAIT probe, and even the release of information by the Highway Patrol on June 28 was brief and without the detail provided in almost all other accident investigations.

Carrillo said Manuel Orozco has not returned to work and was still attending to his brother.

Highway Patrol Public Information Officer Jake Sanchez, who is the spokesperson for the Border Division, home to MAIT, briefly spoke last week on what usually happens in MAIT crash probes but wouldn’t speak to this collision specifically, other than to say that the investigation has no timetable, or the type of urgency associated with a criminal case due to the fact that Deputy Redondo died and no crimes are alleged.

Sanchez placed no timeline, but local CHP spokesperson Officer Arturo Platero has said previously that a MAIT investigation could take as long as two years.

A MAIT investigation is exhaustive, Sanchez said, and can take months or up to year to complete, and that is why the team is not called out for every collision. For instance, even though there is a prosecution happening related to the migrant crash on Norrish Road and Highway 115 near Holtville, the team is still working on that case from March in which 13 people died.

Investigators consider a complete forensic approach into the effort, dismantling involved vehicles and checking for physical or mechanical defects, combing data event recorders, using mapping and drone footage of the scene, in addition to traditional methods of investigation, such as interviewing occupants and witnesses and consulting pathology and autopsy reports when a death has occurred, Sanchez said.

On the data recorders, Sanchez said:

“That black box literally tells you acceleration, deceleration, steering input, it gives you all the information. It’s more advanced now, obviously, with newer vehicles than it was 20 years ago. There’s a lot of information that can be pulled from that device, and they take all that together, and match it with coroner’s reports and physical evidence.”

The results of the data event recorder would not be made public until the investigation is over, he added.

Meanwhile, Carrillo was not prepared to speak about whether his clients would be seeking some sort of monetary compensation for the accident, just to say that clearly with a brain injury, Andres Orozco’s future earnings, as a father of two young children, has been compromised.

Carrillo confirmed that the other occupants of the pickup have retained legal counsel, but it wasn’t immediately available with whom.

What happens next will fall in line with the timetables set under California law for filing claims and lawsuits.

The Orozcos or any of the injured in the accident have 45 days from June 26 to file a government tort claim, which would be on or around Aug. 11.

In the meantime, once a claim is filed, “they (the county of Imperial) have to either respond within 45 days or on the 46th day, we can file our lawsuit. At this point, we’re still in the investigatory process,” Carrillo said. “So, we haven’t filed our claim yet.”