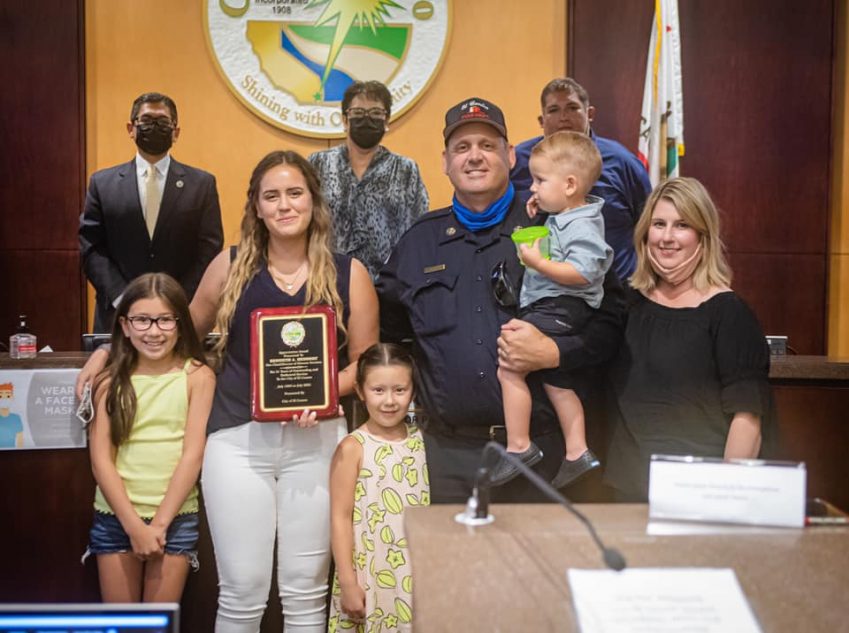 After 31 years of service with the El Centro Fire Department, Ken Herbert retired as chief on Monday, July 19. The El Centro City Council honored him with a plaque a day later during its regular meeting. | PHOTO COURTESY OF EL CENTRO
Home
Public Safety
In Public SafetyRegional News

EL CENTRO — The praise and well wishes were expected, but nothing underscored the sentiment surrounding Ken Herbert’s recent retirement as El Centro fire chief quite like the partly playful, partly genuine requests that he consider staying on a little while longer.

After 31 years with the El Centro Fire Department, Herbert’s last day on the job was Monday, July 19. A day later, he appeared before the City Council, which presented him with a plaque of appreciation for his leadership and service.

And while his colleagues in the department and on the council offered no shortage of acclaim during the Tuesday, July 20 meeting, a few indicated they were not yet ready to see him go and lightheartedly suggested he postpone his retirement for the continued benefit of the city.

In response to those pleas, Herbert offered assurances that he was not leaving town and would remain willing to lend a helping hand when needed.

“If there’s anything I can do to lend my talents, I would certainly be eager to do so,” he said.

Aside from a brief stint with the Brawley Fire Department, Herbert spent the majority of his fire service career with the El Centro Fire Department, which he joined in 1990. He had served as chief of the department since October 2013.

His retirement follows what many city officials described as an impeccable response to the COVID-19 pandemic, both as chief and director of the city’s Emergency Operations Center.

The application period to fill the chief’s position had yet to get underway as of Wednesday, July 23. Battalion Chief Cedric Ceseña will serve as interim chief until a permanent successor can be appointed.

“The city is in great hands,” Herbert told the council. “I have total faith in these guys going forward.”

Ceseña, who joined the department as a battalion chief in December 2013 after being employed as the county’s emergency medical services and bioterrorism manager and a Calexico fire captain, called Herbert “the best boss that I ever had.”

“Very seldom, you come across someone who changes your life for the best and makes you a better person and teaches you everything you need to know along the way, so that one day you can stand on your own,” Ceseña said following the council’s presentation of the plaque to Herbert.

It was Herbert’s particular style of “servant leadership,” Ceseña said, that allowed the department to thrive while meeting the needs of the city’s administrators and the wider community.

El Centro fire Capt. Chad Whitlock had similar praise for Herbert, noting that being an at-will employee of a municipality is no easy task.

“It’s a tough job to take on,” said Whitlock, who has been employed with the department for more than 30 years. “He did an amazing job.”

A lot of his success, Herbert said, was largely due to the staff that acted as “the backbone” that held the department’s administration together.

“I couldn’t have done it without the support and the people behind me,” he said as he stood at the lectern in the council’s chambers while his colleagues honored him.

At one time during his remarks, Herbert appeared to get choked up while acknowledging his family, which was in attendance, and the support and inspiration they provided him throughout the years.

Others he thanked included City Manager Marcela Piedra, who was referred to as “a joy to work with” and someone whose own leadership style he had tried to emulate by helping develop his subordinates’ levels of confidence and trust so that they in turn could perform independently and optimally.

When it came time for the council to bid Herbert farewell, council member Edgard Garcia thanked him for his “impeccable” service and for his role in helping keep the community safe during the pandemic.

Garcia said he was especially appreciative of the constant and accurate updates that Herbert provided city officials.

“I would not have been as confident going forward without the fact that you were at the helm of the ship, essentially,” he said.

Council member Sylvia Marroquin told Herbert that she found it hard to believe he was of retirement age and offered thanks for ensuring that the department was able to maintain its progress in his absence.

“By the sounds of it, you did a really good job preparing your team,” Marroquin said.

Council member Martha Cardenas-Singh, who like Marroquin had only briefly served on the council during Herbert’s tenure, said she was nonetheless impressed by his dedication and humility.

One example of that dedication that stood out in her mind was when Herbert and his wife had made repeated trips to and from the Imperial Valley Mall during a January vaccination clinic for seniors that had prompted many of them to camp out overnight during cold weather to secure a vaccine dose.

“It’s not about the title it always been about serving our community,” Cardenas-Singh said

Mayor Pro Tem Tomas Oliva told Herbert that he had initially gotten a glimpse of Herbert and his fellow firefighters’ close working relationship and courageousness during a ride-along where they responded to a report of an active shooter and Oliva was given a bullet proof vest to wear.

More recently, the pandemic and the city’s response gave Oliva a much greater appreciation of Herbert’s role and leadership, which left him in awe.

“I certainly did not fully understand your responsibilities until this pandemic hit,” Oliva said.

For Mayor Cheryl Viegas-Walker, who said she has long considered Herbert a friend, her consideration of his legacy must take into account his upbringing, which she recalled Herbert had acknowledged was rather challenging during a keynote address he delivered at local youth summit the county Probation Department had hosted in the past.

“You inspired me and allowed me to see a side of you I think I had not heard before but certainly gave me a tremendous amount of respect for just how much you have accomplished,” she said.

Lastly, City Manager Piedra offered her well wishes to Herbert. She expressed gratitude for the selfless service both he and his colleagues displayed on a daily basis in the performance of their duties.

Added thanks were provided for Herbert’s role in ensuring that the department stayed true to its mission of demonstrating leadership, innovation, commitment, and dedication.