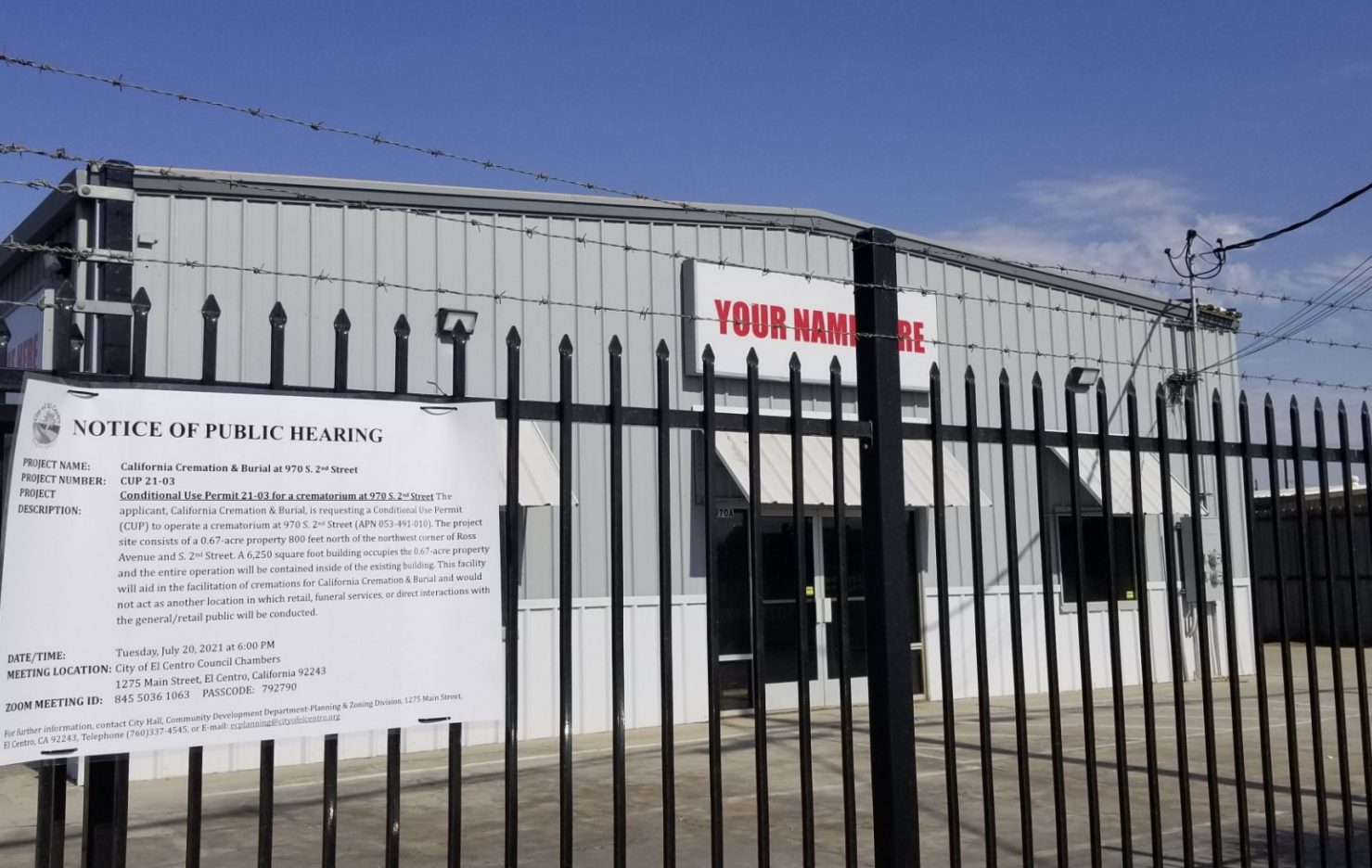 A former recycling center at 970 S. Second St. was all but denied as a third crematorium on the east side of El Centro, when the City Council viewed the matter through an “equity lens” during its meeting on Tuesday, July 20, determining that yet another facility in that area of the city was unfair. The item to consider a permit for the facility was tabled to a Sept. 7 meeting. | PHOTO COURTESY OF THE CITY OF EL CENTRO
Home
Regional News
In Regional News

EL CENTRO — Though the east side residents who spoke out against a proposed crematorium only totaled five, their relatively small number was a big enough reason to convince the El Centro City Council to oppose the project.

Indeed, it was the mostly Spanish-speaking residents’ limited presence during the council’s Tuesday, July 20 public hearing that convinced Mayor Cheryl Viegas-Walker that the matter should be viewed through what she called an “equity lens.”

Had the proposed crematorium, intended to be located at 970 S. Second St., sought to have situated itself on the city’s west side, the council’s chambers would’ve been packed with residents in opposition, Viegas-Walker contended.

Instead, only a handful of east side residents turned out to express their concerns about potentially harmful emissions and impacted property values. And considering that the city’s two existing crematoriums are in the city’s eastern half, a third, Viegas-Walker said, would prove to be too much.

“This would mean that all three crematoriums within the city of El Centro would be located east of Fourth Street, and to me that is simply not something that I’m willing to buy into,” she said.

Viegas-Walker’s assessment of the situation was equally shared by council member Martha Cardenas-Singh and Mayor Pro Tem Tomas Oliva, who said the resolution would not have made it before the council had the project been proposed for the city’s west side.

However, the council did not outright vote down the project’s application for a conditional-use permit but decided unanimously to table the agenda item so that it could make a record of its findings and consider the resolution’s denial during its Sept. 7 meeting.

The 6,250-square-foot facility, proposed by San Diego-based California Cremation & Burial, would have occupied a warehouse that previously had served as a recycling center.

Rather than operate as a traditional funeral home, it would have limited its services to the cremation of deceased individuals brought from neighboring San Diego, Riverside and Los Angeles counties, as well as Arizona and Nevada, said Martin Mitchell, principal owner of California Cremation & Burial.

During his remarks to the council, Mitchell indicated that the facility would cremate about four bodies a day on average, possibly fewer.

“We’re not going to be doing several hundred cremations in a short period of time,” Mitchell said in response to a community member’s assertion that dozens of cremations would take place daily.

Mitchell also assured the council that the facility would have been situated farther away from nearby residences than the city’s two existing crematoriums, which include Hems Brothers Mortuary at 1975 S. Fourth St., and Gardens of Eden, at 384 W. Main St.

The location in question is zoned for light manufacturing and is largely surrounded by businesses such as a diesel engine repair shop, construction and transportation yards, as well as plumbing and air-conditioning contractors.

Additionally, the proposed project’s two state-of-the-art cremation chambers would have prevented any potentially harmful emissions that could have negatively impacted the community’s air quality, Mitchell said.

The permit that the proposed project had sought was the first in a series of requisite approvals the facility needed to become operational. Were the city to have approved the permit, the county Air Pollution Control District would still need to approve the proposed facility’s construction permit and permit to operate its cremation chamber, said Christian Rodriguez, assistant city planner.

Final approval would need to have come from the state Cemetery and Funeral Bureau, which also looks at emissions but not as closely as the local Air Pollution Control District would have, Rodriguez said.

The proposed project was previously approved by the city’s Planning Commission.

Though not unanimous, the council also voted 3-2 to deny a conditional-use permit for a 75-foot telecommunications tower that was proposed to be erected in the city’s southwest section during a separate public hearing on July 20.

Again, Viegas-Walker led the opposition, expressing concerns about the height of the tower, designed to look like a palm tree and proposed for a commercial property at 1560 Ocotillo Drive.

“Seventy-five feet is going to stick out like a sore thumb,” she said, noting that a city ordinance caps commercial signage at 35 feet and palm trees usually reach heights of about 30 to 50 feet.

Imperial County Brings On Consultant to ‘Mine’ Lithium

The cell tower was proposed by Tempe, Ariz.-based Clearblue Services and would have provided service for T-Mobile, as well as a potential second cell carrier.

“We can’t go lower because of the other sites that it actually talks to,” Cassel told the council.

The location of the proposed tower was selected because it would have bolstered spotty cell phone and internet service for T-Mobile customers in the southwest section of the city. Currently, it is not uncommon for consumers to have to step outside their homes to obtain better reception, Cassel said.

The proposed tower’s 75-foot height also negates the need to erect multiple shorter towers that could serve as an adequate alternative to enhance telecom coverage in the area.

“The location gives the city an opportunity to not have as many poles,” Cassel said.

If the proposed project’s permit would have been approved, the property owner would have entered into a lease agreement with Clearblue Services. The financial terms of that agreement were not disclosed to the city, which Mayor Pro Tem Oliva said he found “strange.”

A condition of the proposed permit had also stipulated that if the tower were not to be used for a six-month period it had to be dismantled.