Suspected Disease in Jacumba Wilderness South of Ocotillo is Not Harmful to Humans, Other Species 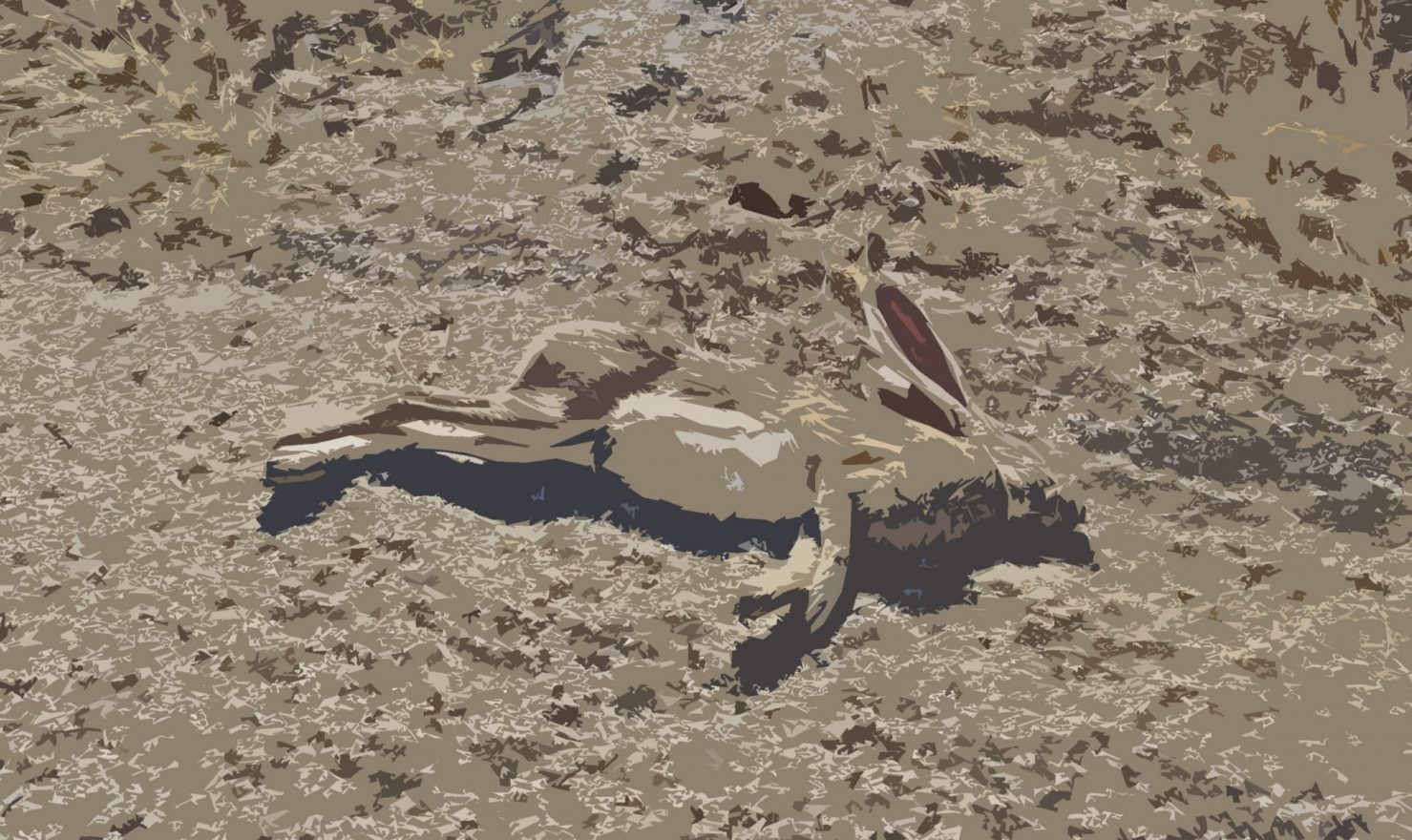 The carcass of a dead jackrabbit suspected to have succumbed to an outbreak of rabbit hemorrhagic disease is one of at least 100 found in the Davies Valley area of the Jacumba Wilderness south of Ocotillo since February. The virus is not a threat to humans or other species, but is extremely transmissible among rabbit populations. | CALEXICO CHRONICLE/EDIE HARMON PHOTO ILLUSTRATION
Home
Regional News
Share

OCOTILLO — Though not as plentiful as other wildlife, it is not uncommon to observe the occasional peninsular big horn sheep, flat-tailed horned lizard or tarantula while hiking through the Davies Valley area of the Jacumba Wilderness.

Much more common wildlife sightings include woodrats, round-tail ground squirrels, desert iguanas and, up until recently, black-tailed jackrabbits. These days, however, one is more likely to stumble upon the carcass of a jackrabbit than spot a live one.

Since February, scores of dead rabbits have been encountered in Davies Valley, mainly by an Ocotillo resident and avid hiker, who then reported her findings to local, state, and federal officials.

Because of the large number of reported deaths — more than 100 to date — state wildlife officials suspect that rabbit hemorrhagic disease is likely behind the apparent die-off. Yet, determining the cause of the rabbits’ deaths has proven troublesome.

When California Department of Fish and Wildlife and U.S. Bureau of Land Management personnel visited the isolated canyon in March to try to retrieve a rabbit’s remains for testing, none in suitable condition were found.

Instead, officials encountered multiple carcasses in various states of decay, due to numerous desert scavengers, as well as the hot, dry conditions that cause the remains to decompose rapidly.

“CDFW will continue to try and confirm the cause of the reported mortalities in Imperial County, however the area is remote (access by foot only into the wilderness area) which makes fresh carcass retrieval more difficult,” said Deana Clifford, CDFW Wildlife Health Lab senior wildlife veterinarian.

Any potential confirmation of rabbit hemorrhagic disease in Imperial County would represent its first official instance. The virus was initially detected in a dead wild jackrabbit in Palm Springs in May 2020 and has been confirmed in both domestic and wild rabbits in six California counties, including neighboring San Diego and Riverside counties.

In the meantime, state officials have advised local stakeholders of the apparent die-off in the wilderness and requested they report any sick or dead rabbits to CDFW.

Humans, livestock, or other species of animals are not susceptible to rabbit hemorrhagic disease. It is solely spread among lagomorphs, which includes wild and domestic species of rabbits and hares, as well as pikas.

Ocotillo resident Edie Harmon was the first to sound the alarm about the apparent rabbit die-off. While hiking in Davies Valley on Feb. 27, Harmon discovered nearly two dozen rabbit carcasses, prompting her to submit a wildlife mortality report to CDFW later that day.

Two successive trips to Davies Valley in the following days doubled that number, as Harmon explained in a series of written reports she compiled and emailed on March 4 to personnel from the CDFW, BLM El Centro Field Office, Border Patrol, and California Department of Food and Agriculture.

“The jackrabbit die-off seems significant to me, because I have not seen anything like this in all the hikes I have made in Skull Valley and Davies Valley since May 2020,” Harmon stated about a March 3 excursion where she was joined by BLM and CDFW personnel. “We saw no live jackrabbits. So, something is very wrong.”

Nor has Harmon, a retired geography and biology professor who has lived in Ocotillo for more than 40 years, observed any signs of an apparent rabbit die-off in Skull Valley, which is east of Davies Valley, since her initial discovery in February.

The absence of any observable die-off in Skull Valley may suggest the suspected disease outbreak has been confined — for now — to the Davies Valley, which is separated from Skull Valley by a north-south bearing mountainous ridge.

The highly contagious virus is transmitted between rabbits through contact with infected rabbits or carcasses, their meat or their fur, contaminated food or water, or materials coming into contact with them, said Clifford, the state wildlife veterinarian.

The virus can remain in the environment for a prolonged amount of time, making disease control efforts “extremely challenging” once it is in wild rabbit populations, according to a CDFW fact sheet about the disease.

“It is possible that the outbreak is localized but in sparsely populated areas cases may go undetected for a long time,” Clifford said.

Rabbits are also important prey for many species that call the Jacumba Wilderness home. A significant drop in their number could reverberate within the ecosystem.

“There is potential that predators which rely on rabbits as a major part of their diet (golden eagles and bobcats) could be impacted,” Clifford said.

The Davies Valley region of the 31,357-acre Jacumba Wilderness is one in a series of valleys and canyons that lie within the southern portion of the Jacumba Mountains. Its topography was succinctly described by the University of Montana-hosted website, Wilderness Connect, as a “fantastic jumble of granitic rock pushed up by faults in long-gone days,” “with large stretches of surface cobbles covering the ground.”

People can also unintentionally spread the virus to new areas if their shoes, clothing, or vehicle tires become contaminated.

Because vehicular travel is prohibited in the federally designated Jacumba Wilderness, visitors to the area are typically limited to the occasional hiker, Border Patrol personnel and the migrants who have crossed illegally into the United States from Mexico.

The El Centro Sector Border Patrol has been made aware of the suspected outbreak of rabbit hemorrhagic disease but has not adopted any formal measures that could limit the potential spread of the virus by agency vehicles that patrol the area, the sector’s public affairs office stated.

One recommended way to prevent the virus from being transmitted by human activity is to spray the bottoms of one’s shoes, equipment and vehicle tires with a disinfectant made up of nine parts water and one part bleach after traveling in areas where rabbit hemorrhagic disease has been confirmed or suspected, the CDFW stated.

Local 4-H officials have also been monitoring the situation. The organization was initially alerted to the suspected outbreak in the wilderness not by the state, but by members and leaders who were “very much in the know,” said Anita Martinez, University of California Cooperative Extension 4-H representative.

“We are monitoring it and will continue to monitor,” Martinez said in May. “But there really wasn’t a full need for us to be hyper-sensitive to it yet.”

News of the suspected local outbreak came amid the COVID-19 pandemic, when restrictions against large gatherings were in place and which appeared to have limited local youths’ participation in rabbit projects for the annual California Mid-Winter Fair & Fiesta, Martinez said.

“We did have a very low number of animals this year,” she said. “And they (were) already doing their own quarantine.”

Yet, meetings involving 4-H participants with animal projects are expected to get underway in October and November. As that time nears, 4-H officials will reassess the situation, Martinez said, adding that any reported outbreak, whether it be among waterfowl, poultry, sheep or rabbits, is of concern to the organization.

Years ago, a viral outbreak of some sort was reported among poultry, prompting a 60-day quarantine for participants who had related projects, Martinez said. And whenever a new case was confirmed, it would start the 60-day quarantine all over again.

“That kind of trickles down to the fair,” she said. “If the fair sees a concern, they will do away with that project.”