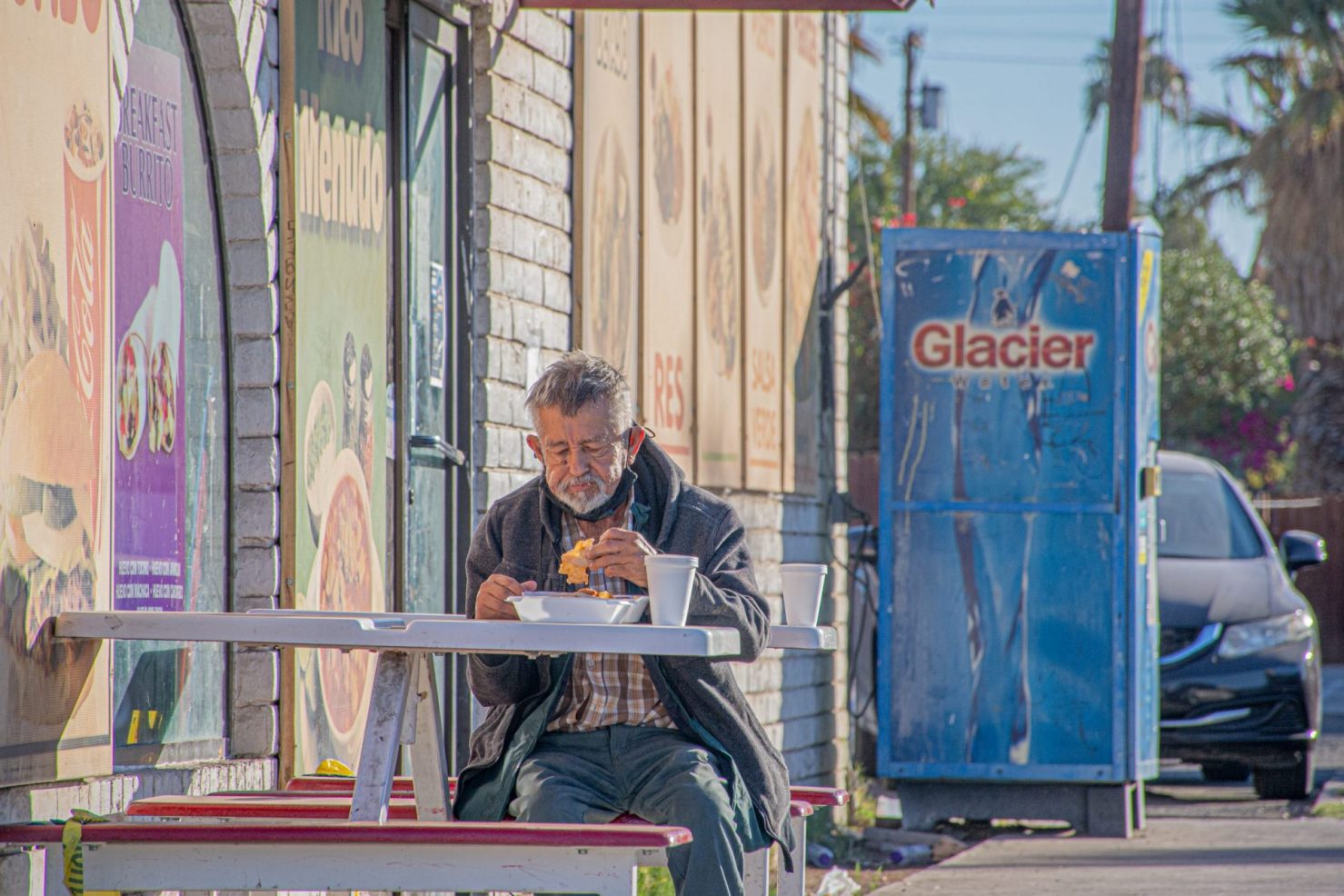 A senior citizen in Calexico eats breakfast in the city on a morning in January. | CAMILO GARCIA JR. PHOTO
Home
Regional News
In Regional News

And in a bonus move, Calexico Mayor Pro Tem Camilo Garcia on Wednesday, July 21, asked that city staff look into using the $13,200 in annual rental fees to be paid by Catholic Charities as a mechanism to offset additional loses to senior funding incurred when the Recreation Department saw its $50,000 recurring grant from the Heffernan Memorial Healthcare District denied in early June.

“I mean, it’s not a lot. It’s not what you usually used to get. But it’s something, so I think if we can look into that, if it is possible, or fiscally, if it doesn’t prevent us from doing that, I think that’s something that should be considered,” Garcia added.

Calexico City Manager Miguel Figueroa promised to look into it with city staff and bring back a report to council at a future regular meeting.

First, Recreation Department Manager Norma Gerardo explained that the city had first inked a “nonexclusive” agreement with Catholic Charities, Diocese of San Diego, in 2019 that was similar to new agreement that took effect on July 1, the start of the fiscal year.

“They’ve used the facilities to provide hot meals to senior citizens,” she said. “It’s not run by the city of Calexico and is not run by my staff. They just use the facilities. … They have staff members there from 9 a.m. to 1 p.m. That’s the time they use the Senior Hall.

“And our seniors already know they have … they call it ‘la cafeteria,’” Gerardo said.

It wasn’t immediately available how many seniors are fed during the lunch program. The new agreement runs through June 30, 2023.

Catholic Charities intended to renew its relationship with city in 2020, but both the humanitarian agency and the city were both closed due to the pandemic.

“We’re more than excited to have them back,” Gerardo said.

What Catholic Charities provides does not rise to the level of loss the department incurred with the elimination of its Heffernan grant. That funding was not solely a meal service but paid for a variety of services.

“(Heffernan’s) support gave us the opportunity to provide year-round programs for seniors,” Gerardo said in June. “We’d love to continue to keep seniors healthy and socially engaged but the funds are not there.”

The Heffernan board in late spring/early summer reduced grant funding for the year by about $200,000 to shift more funding for a longer-term urgent-care center project.

The programs hosted nearly 1,700 sessions that generated nearly 29,000 instances of participation in fiscal 2019-20, she added.

With the addition of Calexico’s Senior Hall as a congregate meal site, Catholic Charities now provides hot lunch to senior 60 and older across nine sites in Imperial County: six daily service sites at the Calexico Community Center hall at 707 Dool Ave., two sites in El Centro, one site in Brawley, one in Heber, and one in Holtville; and three weekly sites, one each in Ocotillo, Salton City, and Westmorland.

The Calexico contract calls for $1,100 in monthly rent for use of the kitchen facilities and dining hall for service.

Calexico Police Officers’ Association members made brief returns to public comment, following up on impassioned pleas made in June prior to the council’s passage of the fiscal 2021-2022 budget on June 23.

The association represents the public safety dispatchers as well as the officers themselves.

Steward for the dispatchers, Griselda Gonzalez, spoke on promises made — and possibly broken — by city staff.

“Tonight, the POA is back requesting answers,” she said on Wednesday. “Dispatchers were promised positions would be open until filled starting in a new fiscal year. The new fiscal year started this July, and so far other city positions have opened, applicants interviewed, positions filled, but no openings filled for dispatchers.

“We keep getting the runaround, fingers pointed between HR, our police chief, our finance director, and our city manager,” Gonzalez said. “I’m here to ask the city council whose responsibility is it to make sure city positions are authorized and open for qualified applicants.”

She added that the communications center is already short-staffed with additional staff to take time off due to maternity leave, so the need for personnel is crucial.

“Our call center has not yet received direction or implemented a plan for coverage,” Gonzalez added. “We keep getting no response, which is stressing.”

“I just like to piggyback off of what my colleague said in reference to the hiring. There’s a lot of pointing fingers and nothing really gets done,” he said. “Every time that this meeting starts, everyone stands there, and they do this mission statement, but it’s really a mockery. That’s what it is. It’s a mockery. … there’s nothing effective and efficient about the city today.”

Casillas acknowledged the current council cannot be held responsible for sins of the past in terms of financial mismanagement but assume responsibility and move forward, it must.

“It is your baby now. So, if you really want to improve the quality of life for the people of this community, as we sit there and view this mission statement at the beginning of each meeting, then we really need to start working together as a team, all five members, and coming to some some solutions,” Casillas added.