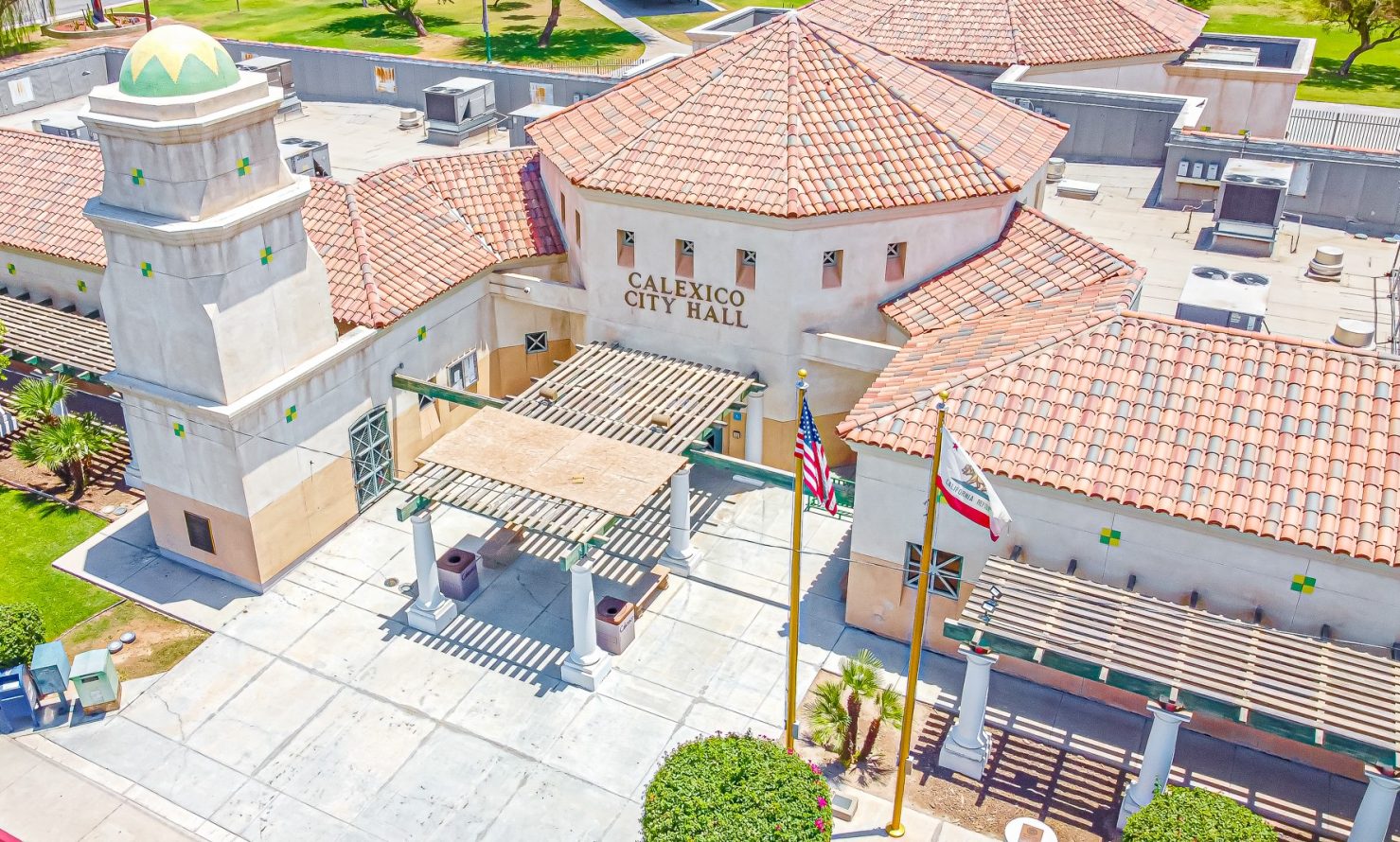 Calexico City Hall has been ground zero for many contentious battles between its members over the years, and the current council is one of the more deeply divided in recent history, with an often insurmountable ideological and political chasm between members Rosie Fernandez, Javier Moreno and Camilo Garcia on one end and Raul Ureña and Gloria Romo on the other. | CAMILO GARCIA JR. PHOTO
Home
Regional News
In Regional News

CALEXICO — Although there is a different mayor in place, the rift between certain factions on the Calexico City Council is much the same, and very nearly resulted in a lawsuit over transparency issues tied to these entrenched divisions.

And it doesn’t appear the person who threatened to sue, controversial City Council member Raul Ureña, plans to back down anytime soon.

For now, the outspoken policymaker has elected not to file a legal complaint by his deadline — today, Friday, July 23.

This is all bound up in the recent approval of a temporary ordinance to rescind council member salaries, benefits, and stipends, which was preliminarily approved on June 2 and earned final approval on Wednesday, July 21.

An end (and possibly a new beginning) to Ureña’s legal threat could be seen playing out in the comedy of errors that preceded the confusing manner in which the consent agenda at the first Calexico City Council meeting under Mayor Javier Moreno was dealt with on Wednesday evening.

“There will be a complaint (regarding the) consent agenda,” Ureña said Friday morning. “We will notify the district attorney with more time, but he is very selective with where he wants to enforce justice. We will see what happens.

“At the end of the day, this will have to be fought in the political arena,” he added.

Buried in the consent agenda — the laundry list of council actions during each meeting that are voted on at the same time with no discussion — was the second reading, or final approval, of the temporary ordinance.

Ureña, who attended Wednesday’s meeting telephonically in the new absence of a Zoom option, attempted to get the council to pull the item from the consent agenda for purposes of discussion and a vote but was denied. Instead, the second reading of the ordinance passed as part of the blanket approval of four other issues in a split 3-2 vote, with Ureña and council member Gloria Romo voting in opposition.

The compensation issue became a transparency concern for Ureña, and by extension, Romo, and was followed by an initial threat of a lawsuit after the June 2 meeting, where he accused then-Calexico Mayor Rosie Fernandez and Mayor Pro Tem Moreno of violating California’s open meetings law, known as the Ralph M. Brown Act, by colluding to line up votes prior to that meeting.

To recap the issue, the council voted 3-2 to approve the first reading of the ordinance on June 2, which was a gesture meant to save the city money on elected officials’ stipends at a time when the council was mulling yet another tight budget amid the COVID-19 pandemic that had affected the city in a number of financial ways.

With Wednesday’s second level of approval, the ordinance takes effect 30 days later, at which time it will be on the books for 12 months and save the city a total of $154,920.73 to the general fund by suspending all benefits, salaries, and stipends, with the exception of the city cellphone allowance.

Mayor Moreno on Thursday, July 22, said the idea to suspend the payments to council members was his from the outset, and that the culmination of that process that started June 2 was a way to help the city.

“We’re going through a pandemic, where resources are limited, and I came up with that idea. I talked it over with my cohorts, and by the way, it’s temporary,” Moreno said.

“It’s just a way to give back to our employees, especially (since) we have a city clerk who’s limited on technology. That money is going to go to that, to revamp the technology, because what happens is, she gets a lot of freedom of information requests,” he said, “and our system is antiquated. This is for technology, for infrastructure for her and her job … So that’s going to benefit the community.”

Although it does make up a small piece of the general fund, discussion at the June 2 meeting revolved to some degree around obtaining new computer equipment for City Clerk Gabriela Garcia to fulfill those myriad California Public Records Act requests, many of which, it must be noted, have come from council members Ureña and Romo.

Yet Moreno’s statements from Thursday hit on exactly the point made by Ureña over open access and allegations of Brown Act violations from that night, which he alluded to in social media videos from the meeting in the week-plus after it took place.

While Ureña said on Thursday that a letter threatening the litigation after June 2 was public, it was not public knowledge or part of the public record — that is, other than city officials, the letter he sent with he and Romo as a signatories was not widely known to exist.

Addressed to Fernandez, the letter in part, states:

“Item 11 backup documents indicate the item is being brought to the table in recommendation by Mayor Rosie Arreola-Fernandez and Mayor Pro Tem Moreno.

“During the recorded discussion, at 2:55:22, Mr. Garcia clarifies ‘Just for the record also, this is not something that is being put on the table right now. This is something I had asked (for) even before at that time.’

“Ms. Fernandez at 3:02:19 ‘I want to make a comment. You accused me in El Centro when you gave your little report at 2 o’clock this afternoon that it was my idea. I want to tell you something.’ (inaudible via mic because mic is moved at that exact moment but from recollection: It initially was Camilo’s idea) ‘oh yes I proposed it because I had three (votes) also had my Pro Tem Mayor that also asked for it.’”

Those passages are key because Ureña alleges in the letter that they present the evidence of “lining up” votes, or deciding the outcome outside the publicly noticed meeting, a violation of the Brown Act.

The remedy, according to his letter, was to occur in multiple parts.

On one end, Ureña wanted a response in 30 days, which ended July 8, but he never received a formal response, he said. So, from that point on he had 15 days ending July 23 to file suit on the matter.

The other remedy, he said, was for the decision to be abandoned and not move forward, and that appeared to be the case, as nearly two months elapsed between first and second readings but then reappeared on the consent agenda with Moreno’s first meeting as mayor; the mayor sets the agenda.

What is commonly the case with ordinances is, the first and second readings occur in successive meetings (often two weeks apart), with the ordinance taking effect 30 days following the second approval.

Moreno was asked about the return of the ordinance with the legal threat having been made.

“First of all, obviously I can’t speak for him, right, what his intentions are. He can, of course, take any recourse necessary available to him by law. What that is and what’s available is not my concentration,” Moreno said on Thursday. “My concentration is to put forward a proposal that is going to benefit the city.”

Moreno added that legal counsel advised the City Council members that what occurred on June 2 was not a violation of the Brown Act, although more specific reasoning was not given.

Prior calls and messages to City Attorney Carlos Campos on this matter have never been returned, and a comment on the record from City Manager Miguel Figueroa was never provided.

Ureña said early Friday that he decided not to move forward with litigation, not for lack of will, but because of the personal liability to him if he were to lose a legal fight.

On Thursday afternoon, he said that his legal challenge was being undermined by his personal poverty in that he was expected to pay legal costs up front and recoup costs only if he won. If he lost, he would be personally responsible. On Thursday, he was trying to line up some sort of pro bono representation.

There will be “no lawsuit because it was not financially viable; too much of a gamble with money at the end of the day,” Ureña said on Friday.

Still, Wednesday’s approval of the consent agenda, he added, opened the door for new Brown Act issues, and there is some questionable action taking place on the posted video.

In the run-up to approving the consent agenda, before a motion was made to approve it, the council was told that Ureña wanted to comment on item No. 6 and that one member of the public, Calexico Police Officers’ Association President Luis Casillas, had a comment on the item.

Further, it’s clear from the video recording, by the way that City Manager Figueroa and acting City Attorney Seth Merewitz were hemming and hawing, that there was some question as to how this was being handled.

Whether that was a Brown Act violation, as Ureña posited, is not clear.

Authoritative sources speaking on background indicated what transpired is more akin to a violation of Government Code 54954.3(a):

The gray area, the source stated, comes with the question as to whether a second reading of a previously approved ordinance is a new layer of approval subject to a separate right to comment, or a continuation of an issue.

However, in interpreting how a consent agenda is used, the League of California Cities’ own “California Municipal Law Handbook 2020” says:

“If the body uses a consent agenda for routine items of business and does not allow members of the public to remove those items from the consent calendar for discussion, then a general audience comment period must precede action on the consent calendar to ensure that the public has an opportunity to comment on any item on the calendar before action is taken.”

Technically, Ureña could be considered a member of the public.

So, the approval of the temporary ordinance stands today, but will it stand tomorrow? That depends on how far Ureña is willing to push it and whether a challenge meets legal muster.

“The legal system is not perfect in this country,” he said on Friday morning. “Thankfully no one takes away our right to vote or (make) destitute any politician in this particular state.”