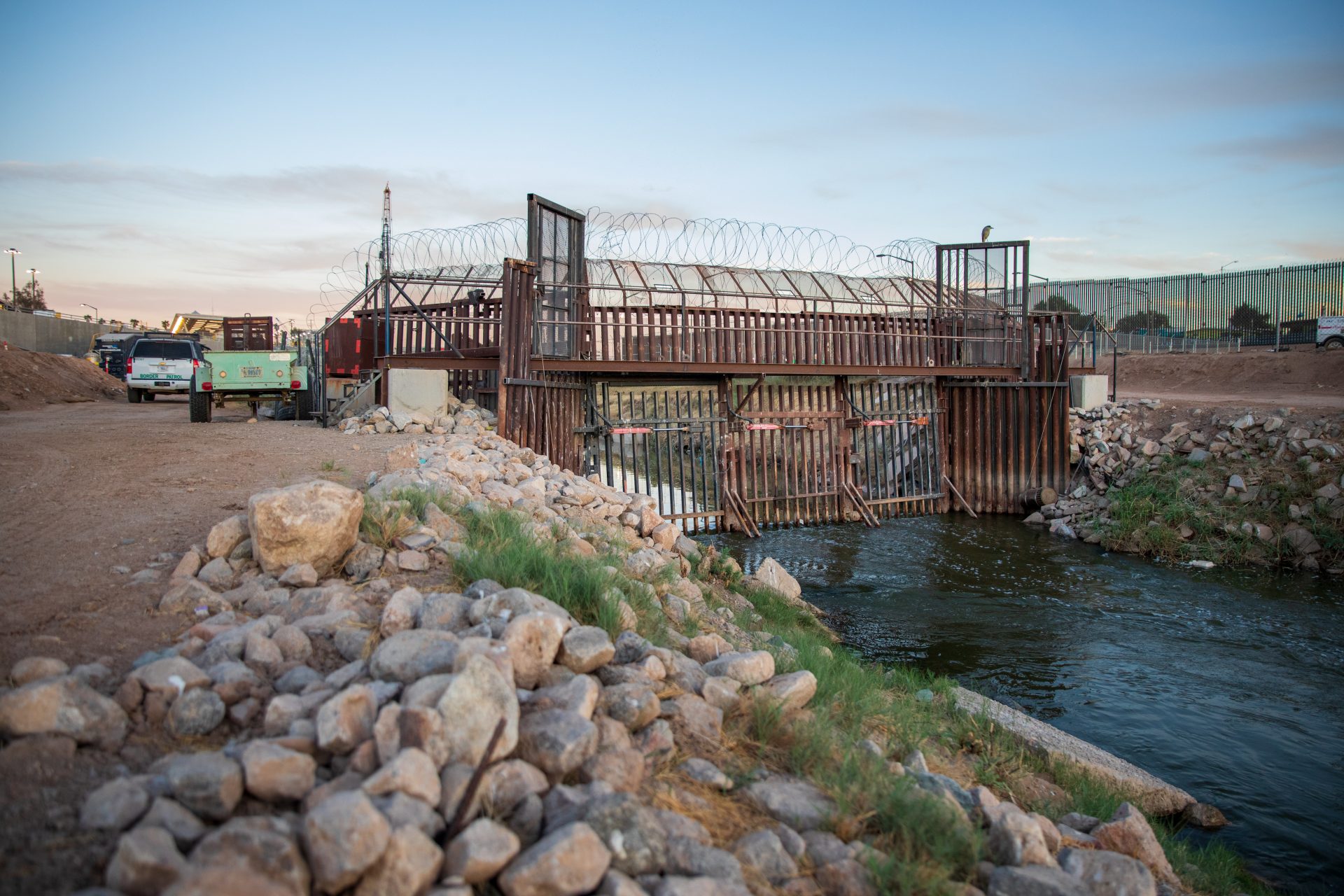 A Border Patrol vehicle sits to the left of the gate that separates the U.S. from Mexico on the New River in Calexico. | KENNY ROBERTSON PHOTO
Home
Regional News
Share

CALEXICO — Envisioning a future in which the New River as it runs through Calexico receives more than lip service came into sharper focus this week with progress on two separate pieces of the puzzle to restore the embattled waterway.

Calexico officials received word on Tuesday, July 20, that the New River Improvement Project, the elements of the overall plan that directly addresses the polluted waters as they flow north from Mexico, will be part of a streamlined permitting process that will allow the city to keep to an aggressive timeline of seeing work commence before the end of the calendar year.

Similarly, the Calexico City Council approved the hiring of a project management firm to oversee so-called Phase 1B of the New River parkway project, the portion of work aimed to upgrade the green spaces and bike trail that will beautify the banks of the river.

The news on the improvement project did not require any council action on Wednesday night, July 21, and was delivered as part of City Manager Miguel Figueroa’s report.

“Yesterday (July 20), I received confirmation from the California Environmental Protection Agency in which they notified me that the New River Improvement Project as a whole was accepted to be considered (on) a list of projects under the federal Water Resources Development Act (of 2022),” Figueroa said.

“What this means is that our three infrastructure projects for the New River here in Calexico are going to receive a streamlined process to secure the regulatory permit for construction from the U.S. Army Corps of Engineers,” he said. “This will fast track us securing the permit for the project and it will keep us within the timeline that we’ve been sharing in which we want to break ground by the end of the year.”

The Water Resources Development Act is biennial legislation through the House Transportation and Infrastructure Committee that builds a two-year project list for Army Corps of Engineers on infrastructure tied to ports, harbors, and inland waterways.

WRDA 2020 was passed in December, and WRDA 2022 is now being built, according to the Transportation and Infrastructure Committee website.

The funding for the three-piece improvement project has been secured and allocated to current fiscal 2021-2022 budget in the amount of $28.47 million, with $18 million coming from the state’s 2020-2021 general fund and $10 million from the 2018 Proposition 68 water bond co-authored by Assembly member Eduardo Garcia, D-Coachella.

Calexico already has a project manager on board and was in the process of securing regulatory permits for the three technical components of the project, including an automated trash-screen diversion structure south of the Second Street bridge where the river crosses the international border, the encasement of the river from north of the bridge to where the river reaches the All-American Canal, and a pumpback system/force main that will tie into the city’s wastewater treatment plant, clean a portion of the river water and provide for a “freshwater” stream along the river basin in the area.

The parkway project piece, which required the council decision on Wednesday, saw the council vote 4-0 (council member Raul Ureña dropped from the meeting early) to contract with Imperial’s Dynamic Consulting Engineers Inc. at a cost of $195,010 for construction management, geotechnical and inspection services for the parkway project.

More procedural than anything, City Manager Figueroa told the council that Dynamic Consulting “qualified and met all the elements identified in the (request for proposals) that was issued,” he said.

Only one other firm returned an RFP, The Holt Group Inc. of El Centro.

“At this point, the resources that we have for this particular project are within budget of the proposal that was received by Dynamic,” Figueroa said.

The $2 million parkway project was paid for by a grant from the state Department of Transportation, with $1.6 million in federal dollars and $400,000 in local matching funds. It proposes the construction of a 12-foot wide paved asphalt path with landscaped overlook, concrete wingwalls, irrigation and minor drainage improvements, and a bicycle path with separate rights of way for bikes and pedestrians.

Updated at the last regular meeting of the City Council, the notice of project completion was accepted on Wednesday for the $809,232 sports lighting project at Adrian C. Cordova Memorial Park south of Highway 98 on the eastern edge of town.

Putting the sports lighting to bed was a significant step for the city considering it brought forth issues some months ago for Mayor Pro Tem Camilo Garcia in which he felt like the council was forced to accept unforeseen costs due to poor planning.

In July 2020, the council awarded a contract to Tom Watson Inc. for $755,501 to include lighting for three baseball fields, one soccer field, and one basketball court. Due to site requests by the Imperial Irrigation District, unanticipated design phase work, and the need to run nonexistent wiring in the area, costs ballooned by nearly $54,000.

“And yes, you know, it is what it is, it was planned in stages, and I mean, personally I was not too happy,” Garcia said. “But kudos to the people involved in the sports lighting.”

Figueroa reminded the council that the council requested additional trenching to accommodate “future electrical needs that we’re gonna have, like for the lighting board, the concession stand as we move forward with the project, those things, as it was directed and recommended by the council, were performed,” he said.

“On another note moving forward, one of the things here that I also want to share is that the ground is getting prepped so we can start seeding in the fall and winter,” Figueroa said.

The park is bordered on the north by Meadows Drive, on the west by Clinton Avenue, on the east by homes in the subdivision, and on the south side by East Zapata Street, where the restroom units will be located.

A change order in the amount of $460,888, the second such change order, was approved by the council on a $4.63 million street overlay project that saw the city replace 20 sidewalks not part of the original project scope of work by Hazard Construction Co.

Public Works determined that additional Local Transportation Authority sales tax proceeds would be available to add 20 sidewalks to the project, according to a staff report.

Next
Calexico’s Senior Services Get a Boost, More Coming