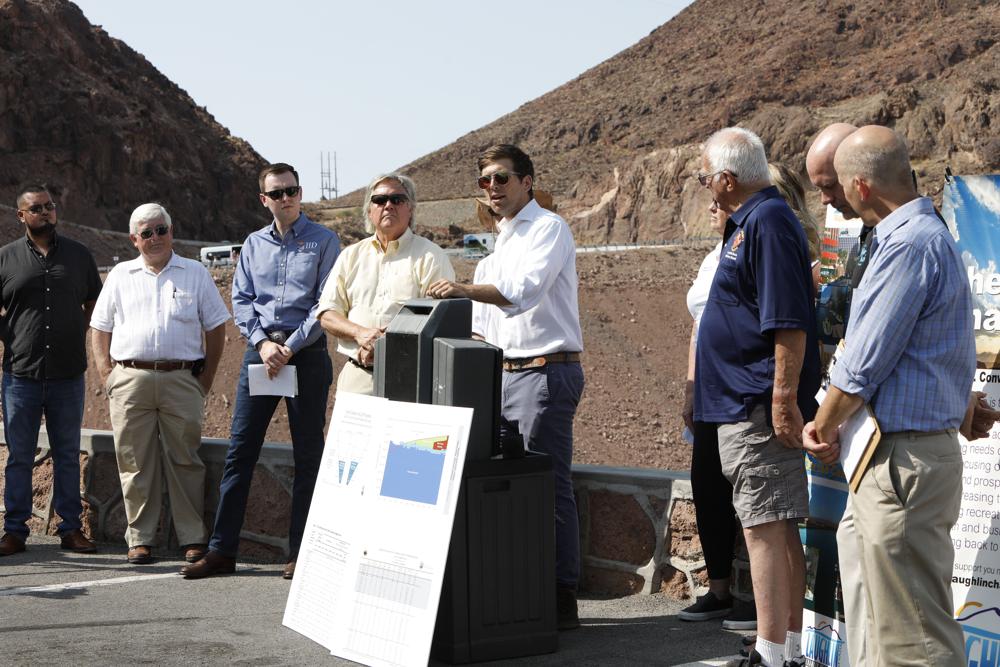 Imperial Irrigation District Director and board Vice President JB Hamby (third from left) attends a news conference in which Kyle Roerink of Great Basin Water Network (center) speaks at the Hoover Dam on the Arizona side on July 15 to share demands for managing the shrinking Colorado River. | CHITOSE SUZUKI PHOTO/LAS VEGAS REVIEW-JOURNAL VIA AP
Home
Regional News
In Regional News

After a pronouncement against building new dams and pipelines on the Colorado River that JB Hamby said was the result of the “manifest destiny” of suburban sprawl, two of his fellow Imperial Irrigation District directors questioned whether such statements constituted an official stance by the district.

“I just want to know if we as a board have taken a position in regards to moratoriums on new dams and proposed pipelines. … I do want to caution this board that declaring war on urban water users can be extremely dangerous,” IID Director Alex Cardenas said on Tuesday, July 20, during the board’s meeting.

“Sticking your finger in the eye of these urban users is something we need to discuss as a board. I think this is unnecessarily provocative,” Cardenas added.

During the IID Board of Directors meeting, Cardenas and Director Norma Sierra Galindo questioned district staff whether the positions put forward by Director Hamby in a July 16 news report were reflective of the district’s position.

“I am seeking an explanation,” Cardenas said.

The discussion was sparked by board Vice President Hamby’s recent trip to Hoover Dam, where he spoke with reporters during a meeting on July 15 in Nevada and attended a press conference on the Arizona side of the dam, according to the Associated Press article in which he is quoted.

Farmers, environmentalists, and small-town business owners gathered to call for a moratorium on building pipelines and dams along the river as the western United States is gripped by historic droughts, hotter temperatures, and dry vegetation, according to the AP article.

Federal officials are expected to make the first-ever water shortage declaration in the Colorado River basin next month, which could prompt cuts in Arizona, Nevada, and Mexico. IID has water rights to roughly 20 percent of the Colorado River apportionment, more than Nevada and Arizona combined.

Hamby appeared a news conference on the Arizona side of the dam on July 15, where he told reporters it was important that water management policies made in the future ensured that rural farming communities — which use the majority of the region’s water — wouldn’t bear the brunt of the drought so that cities can keep growing.

“A suburban ‘manifest destiny’ threatens the current and future sustainability of this river and communities that depend on it,” Hamby was quoted as saying. “We must champion and protect the diverse benefits of irrigated farmland for the West, the nation and the world — for food production and security, the environment, wildlife preservation, recreation and tourism and efficient water management.”

Director Galindo said during Tuesday’s meeting that she was troubled by the representation Hamby had taken upon himself with going to the press conference.

Hamby told the board he doesn’t check his First Amendment rights to speak his mind just because he is a board member. He added he was speaking for himself, not on behalf of the board, during the Hoover Dam meeting and press conference.

“Moving forward, as we begin these drought negotiations on the Colorado River and we’re trying to live with less and recognizing that we’re entering an era of limits, the last thing we should do is further divert and drain the Colorado River, worsening an already bad drought situation,” Hamby said at Tuesday’s meeting.

“I did so very clearly on my own terms as a director on this board,” he added. “I don’t think it’s anything different than I spoke of on my campaign. …That’s my position on things, and I’m happy to share it.”