A Golden ‘Genesis’ in Calexico 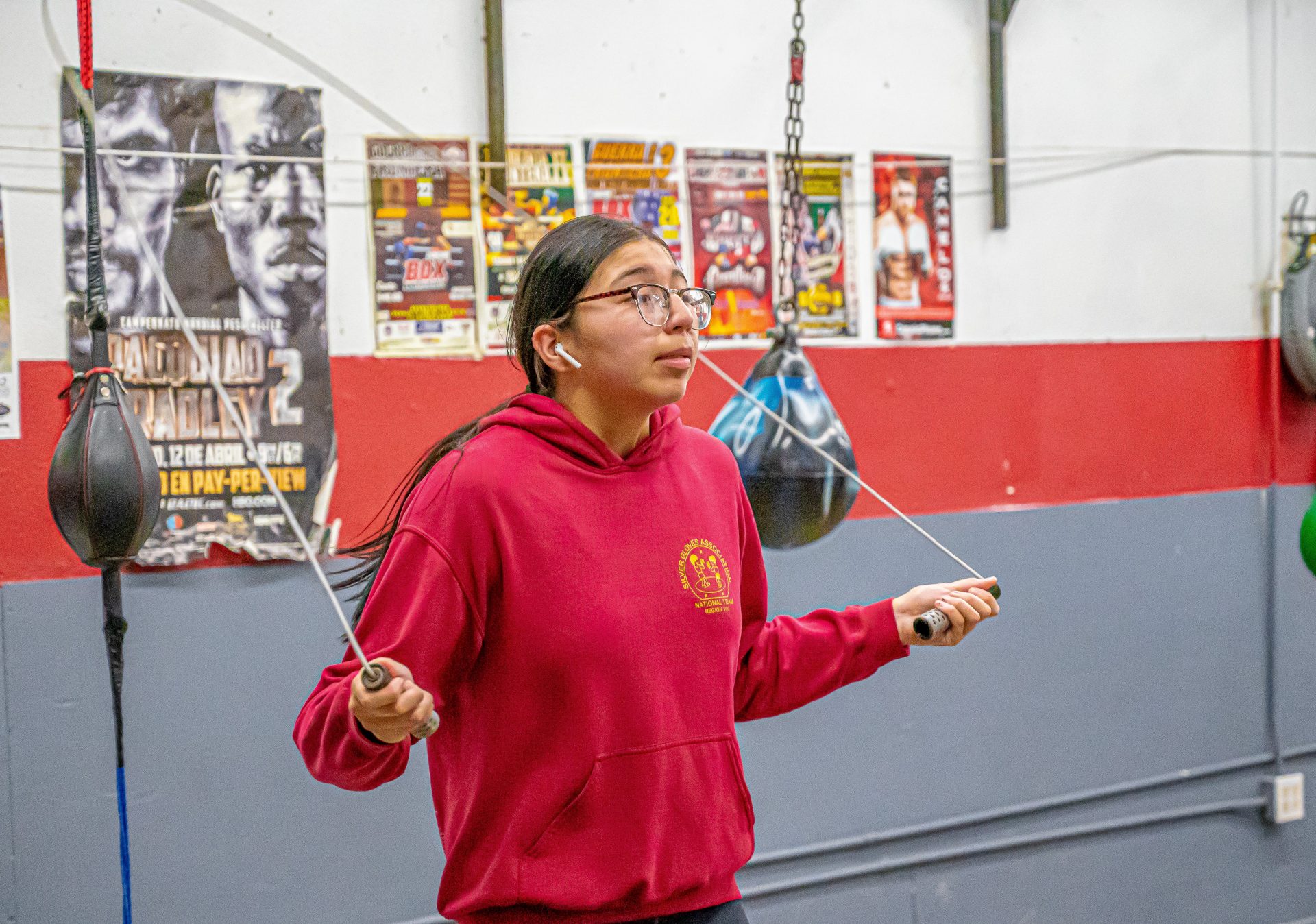 LUBBOCK, Texas — Gold medal-winning female boxers in Calexico cast a long shadow these days, and Baja Boxing Club’s lanky Genesis Garcia casts about the longest in what has been a hat trick of hanging hardware in the border town.

Sixteen-year-old Genesis, like her friends and fellow female fighters, Yaya and Liz Oceguera, took the long trip to Buddy Holly Country more than a week ago to compete in USA Boxing’s National Junior Olympics & Summer Festival, and left a golden girl.

To borrow a song title from Lubbock, Texas’ native son, the soon-to-be Calexico High junior took command in the Lone Star State and made medaling look “(It’s) So Easy,” whooping on the nation’s No. 1-ranked fighter in the 145-pound division in a unanimous decision, due in part to her overwhelming size and reach advantage over her “smaller” opponent.

“I feel like all the work I put in paid off,” Genesis said from her Calexico home on Thursday, July 22. “I knew I had it in me, because I beat her by a unanimous decision.”

Beating her two opponents through her run to the medal stand might be an understatement, and it’s not hard to imagine after taking a look at the young boxer, whose 145 pounds is condensed into what is nearly a 5-foot-9-inch frame with a massive wingspan.

“She always has to spar with boys at the gym because of her size and experience level. She’s sparred with numerous professional women in Mexicali, you know,” said superfan and father, Gabriel Garcia of Calexico.

“Like I told her, ‘Your fight will be against the scale once you get (this age). With your size, you should have a pretty easy time,’ and she did,” added Garcia, who sounds like he knows a thing or two about the sweet science.

After stopping Wisconsin’s Natalia Tovar with 57 seconds left in the first round on July 14, Genesis faced top-ranked Ka’nayharae Pascual of New York in the final on July 15. There, she won a 5-0 decision to bring home the gold medal.

Genesis “controlled the whole fight, she was always pushing the action. The other girl was backing up the whole time,” Garcia said. “So, she was controlling the whole fight, throwing punches and connecting. She has a very long reach advantage — she’s almost 5-9 — so she had a commanding reach over the other girl.”

Genesis and her father give much of the credit of her continued success to Baja Boxing trainer Raul Lau, who couldn’t make the trip to Texas because he was in Mexico at that nation’s Junior Olympic event with a boxer.

Because of that, father and trainer to the Oceguera girls, Francisco Oceguera, also of Calexico, stepped up as Genesis’ corner man.

“He’s a good friend of ours, so he did us a favor,” Garcia said, who accompanied Genesis to Texas.

While in Lubbock, 11-year-old Nayra “Yaya” Oceguera also won gold in the 70-pound bantam division, while her older sister, 16-year-old Lizbeth, or “Liz,” Oceguera won bronze in the 132-pound junior female division after a 3-2 loss in the semifinals.

Most know the Oceguera girls’ story by now, with that family entering the fight game when Liz was little as a way to lose weight and exercise, and young Yaya followed.

But it was also Liz who gave Genesis her … well, genesis, when she brought her buddy along to box.

“Liz is the one that invited me to boxing when we were little. …. I’ve been boxing since I was 12 years old. … She’s the one who invited me to box when we were in elementary school,” Genesis said. “It was another gym. She invited me, and I liked it, and … probably after four months, Raul got me my first fight and that’s when I started taking it seriously.”

Liz and Genesis are still good friends, but Liz fights out of Mexicali with her father, and Genesis has stayed with Lau at Baja Boxing.

“She makes a lot of sacrifices, training five days a week, two hours a day, running after practice or sometimes in the morning before,” Garcia added.

And Genesis isn’t letting up. In fact, she was back at it on Friday evening, July 23, inside the stuffy Baja Boxing warehouse off M.L. King Street, where she and other boxers were putting themselves through yet another grueling workout.

After a junior Olympic win, most young athletes might be talking about their Olympic dreams — apropos considering the summer games in Tokyo just got underway.

While Genesis said that is something to consider, she also talks about getting in as many fights as possible before turning 18, when she said she intends to go “pro.”

At this point, she can see the metaphorical brass ring through her recent golden victory, even when the brutal training regimen makes every fiber in her body scream.

“It’s a freaking love-hate relationship … making the weight, waking up in the morning, it’s hard,” Genesis said. “But at the same time, I think I’ve put so much time into it, I’m not just gonna let it go right now.”