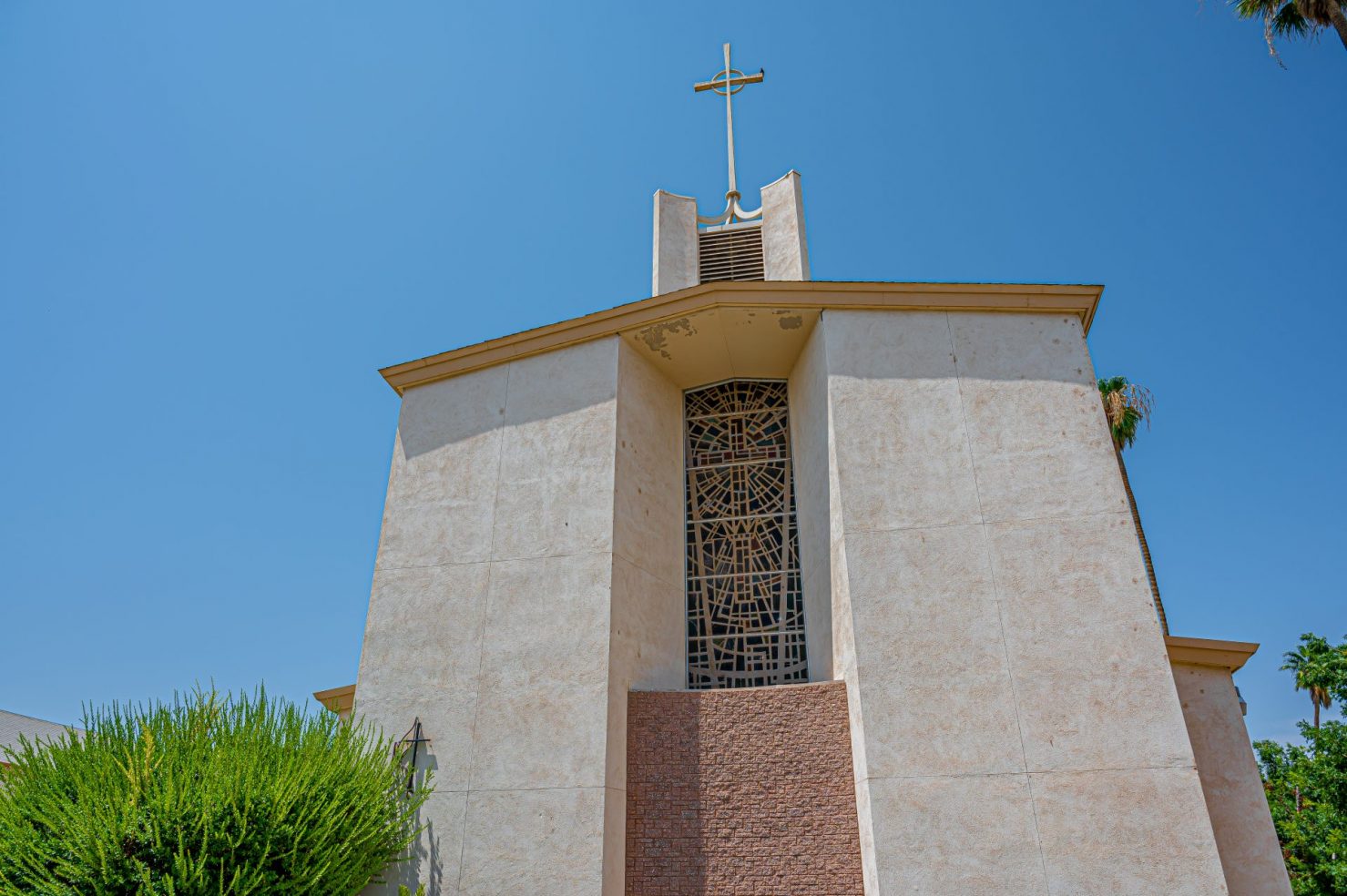 An undetermined number of bunk beds were delivered to the closed United Methodist Church of Holtville on Friday, July 23 as part of the denomination's effort to turn the facility into a welcome center for asylum seekers released from local custody by immigration officials. | CAMILO GARCIA JR. PHOTOS
In Featured StoriesLocal News

HOLTVILLE — Preliminary work is underway to transition the closed United Methodist Church of Holtville into a welcome center for asylum seekers released from custody by local immigration officials.

Some of that initial work involved the assembly of an undisclosed number of bunk beds that were delivered on Friday, July 23 to the church located at 217 W. Seventh St.

News of the bunk beds’ arrival and assembly was shared by Rev. Paige Eaves on the Facebook page of the United Methodist Church of La Mirada, where she ministers.

While she acknowledged that it remained too early to know just how many asylum seekers might be temporarily housed at the planned welcome center while they arrange for transportation outside of the county, Eaves did state there was “a lot of work” remaining to be done at the site.

“Even though we are sometime (away) before we welcome people,” Eaves said in one of two brief livestreamed videos she posted on the UMC La Mirada Facebook page on July 23.

That same day, Eaves met informally with City Manager Nick Wells and Mayor Mike Goodsell to introduce herself and inform the city of the congregation’s plans and ask how to ensure those plans comply with city ordinances.

Eaves, an assistant director of the UMC’s South District Union of the California-Pacific Annual Conference who attends to new ministry and property development strategies, did not disclose the news about the bunk beds’ arrival during the meeting, Wells said on Monday, July 26.

Instead, he and Mayor Goodsell found out about the bunk beds on Saturday, July 24, when a community member shared with them a still image of the bunkbeds from Eaves’ livestream.

The videos were removed from the UMC La Mirada Facebook page on Monday, July 26 after this newspaper had requested permission from Eaves to publish still imagery from the videos.

The apparent omission about the bunk beds hardly came as a surprise for Wells, who said UMC’s South District and its partners on the project, the San Diego-based Christ Ministry Center and the Safe Harbors Network, have tended to neglect to share all available details about ongoing and pending welcome center plans with city officials.

More often, Wells said he has had to find out about those plans through the statements that Eaves and Rev. William Jenkins, Christ United Methodist Ministry Center executive director and Safe Harbors Network founder, have provided during local media interviews.

One such previous statement seemed to suggest that the city was actively “partnering” in the South District’s efforts, which Wells said could not be further from the truth. During his initial phone conversation with Eaves about two months ago, Wells made it clear that the city was not interested in any formal partnership and that many residents had expressed opposition to the welcome center, as well.

“It is far too contentious an issue to for us to take a position when we don’t need to,” Wells said.

Additionally, Wells released a written statement to local media on Friday, July 23 that had sought to clarify some remarks that UMC officials had made in the past, as well as the extent of parties’ correspondence, which prior to the July 23 informal meeting, amounted to about three phone calls and some emails.

“From the start, if I was on the outside listening in to what UMC has said, it very much does not reflect the conversation that the city has had with them,” Wells said.

City officials have also been attempting to tamp down community members’ persistent insistence that the city take swift action to prevent the welcome center’s planned opening.

As with any private property owner, the South District is within its rights to do as it pleases with the church property, to an extent, without any government oversight or approval. The maintenance work and addition of furniture that have taken place are some examples of activities that do not need city approval. However, the installation of an interior wall or additional plumbing would require permitting from the city.

“Those are the kinds of things that they need to come talk to us about,” Wells said. “I wouldn’t say there’s nothing we can do but it’s certainly difficult for us to go marching in and say you can or can’t do what you’re thinking of doing without knowing what their plans are.”

To date, the South District has not applied for any such building permits, but officials have indicated laundry facilities, new toilets and plumbing may be installed.

During his informal meeting with Eaves, Wells said she indicated that she wasn’t the right person to provide specific details about the planned welcome center’s scope of services. But she did disclose that most of the migrants who may be provided services would likely cycle in and out within the same day, with a smaller number residing onsite for a day or two, Wells said.

The district took possession of the Holtville church in March and closed it following the settlement of a local civil lawsuit it filed that had alleged the former congregation had not done enough to minister to the local Hispanic population.

Some of the closed Methodist church’s closest neighbors, who asked to remain anonymous, expressed some concerns and about the planned welcome center, and in one case stated they felt rather indifferent about the matter.

That particular neighbor said that because the church is private property, the owner should be able to do what they please with it, so long as those plans do not run afoul of city ordinances.

“If the regulations allow it, why not,” the neighbor said.

A second neighbor referred to the planned welcome center as a “conundrum,” and lamented the fact that not much information about the initiative has been made available to the public from either church or city officials.

This neighbor further said that their household is not against efforts to help refugees or disadvantaged individuals. But the United Methodist Church could’ve been more transparent about its plans for the shuttered property.

“It just seems like there’s a lot of contradictions on what they say they’re doing and how they are going about doing it,” they said.

In late June, South District Assistant Director Eaves and Jenkins, the Safe Harbors Network founder, did issue a press release that outlined the district’s plans for the church, indicating that it intended to use the facility to process asylum seekers that are being released from local custody by federal immigration officials.

Since then, Jenkins provided information that an estimated two dozen asylum seekers, comprised exclusively of women and children, would likely receive services at the church once it becomes operational.

During Eaves’ informal meeting with City Manager Wells, he was told that most of the asylum seekers would likely be processed within a day and transported to unite with family and sponsors outside of the county, with only a few requiring overnight lodgings before traveling elsewhere, Wells said.

The indication that solely women and children would be housed at the site did much to ease some of the concerns of a third neighbor of the church. And while they had yet to personally speak with anyone who expressed support for the initiative, the neighbor did say that some community members have taken to social media to do just that.

Nonetheless, the neighbor said they were still mostly concerned about the lack of outreach by the denomination surrounding the project.

“I think that the right thing to do would’ve been for the church to come and ask the residents, but I would never expect that,” the neighbor said. “In the real world that’s not going to happen.”

The South District has indicated that it intends to host a public meeting to provide residents with information about the welcome center in the future.

City officials have also stated that residents who wish to comment on the issue can contact the city by mail by writing to: Holtville City Hall, 121 W. Fifth St., Holtville, CA 92250, or via email at Mail@Holtville.ca.gov