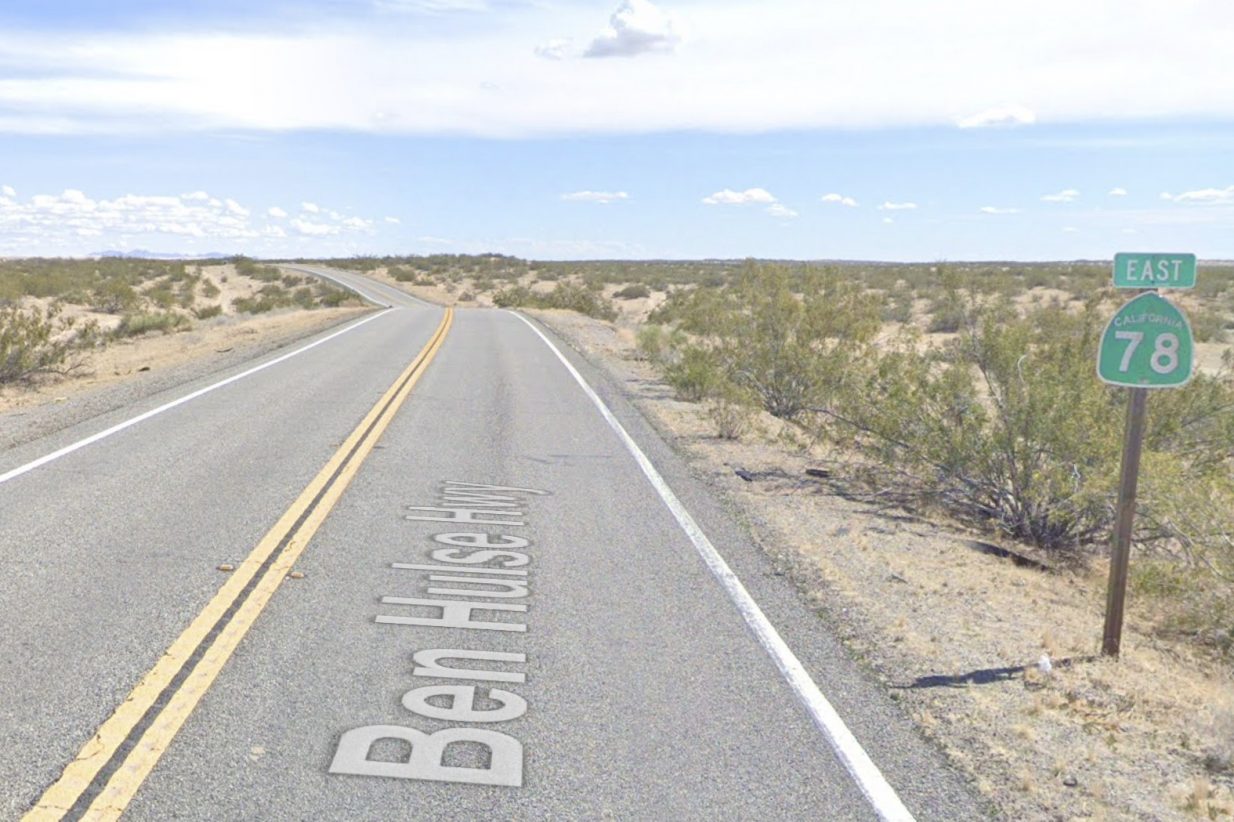 Highway 78 facing east about a quarter mile to a half mile east of Whitlock Road was the site of a fatal collision in which five others were hurt, including four juveniles, on Friday night, July 30. The crash site was about midway between Brawley and Glamis. | GOOGLE STREETVIEW IMAGE
In Public Safety

GLAMIS — A 52-year-old Las Vegas man was killed and several others sustained major to moderate injuries — including four juveniles — when the man who was killed struck another vehicle head-on on Highway 78 east of Whitlock Road near Glamis on Friday night, July 30.

Three airships reportedly flew out occupants to hospitals outside Imperial County who were traveling in a late-model Jeep that was struck by the Las Vegas man.

Those transported by helicopter included the 33-year-old female driver of the Jeep, identified as J. Arredondo of Blythe, and 11- and 7-year-old male juveniles, also of Blythe, according to a report for the California Highway Patrol.

Two other juvenile passengers in the Jeep were transported by ground ambulance to Pioneers Memorial Hospital in Brawley, with a 15-year-old female sustaining a major injury, listed as a broken wrist, and a 10-year-old female with moderate injuries complaining of pain to her abdomen, according to the report.

The accident occurred about 8:40 p.m. when, the Highway Patrol reported, the Las Vegas man was driving alone west on Highway 78 when he somehow collided with the rear of a passing semi-truck trailer that was headed east, the report states.

The Las Vegas man, who was driving 2006 Mercedes sedan, kept heading west after hitting the eastbound semi, into the path of the eastbound Jeep, according to the Highway Patrol.

It appears the Las Vegas man died from injuries at the scene.

People monitoring radio scanner traffic on different social media pages reported the accident occurred about a quarter-mile to a half-mile east of Whitlock Road, and that reportedly two of the occupants of Jeep were pinned and had to be extricated.

Brawley Fire Department, Imperial County Sheriff’s Office, and the Highway Patrol all responded to the scene in addition to the air and ground ambulance crews.

Highway 78 was closed for several hours between Green and Gecko roads, one site reported.