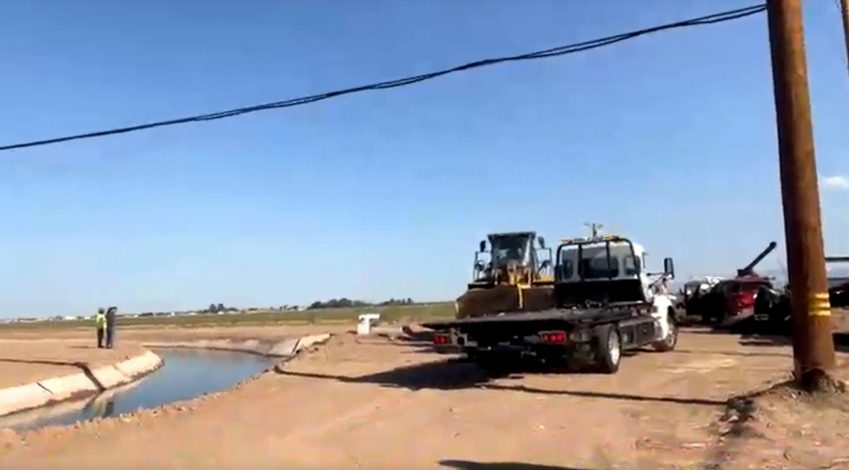 A Jeep Compass (right) can be seen on the banks of the Dogwood Main canal near Willoughby and Dogwood roads south of Heber following a traffic collision. One person reportedly died and was pulled from the canal on Tuesday afternoon, Aug. 3. | SCREEN CAPTURE FROM KYMA LIVESTREAM
Home
Public Safety
In Public Safety

HEBER — A 25-year-old Calexico woman died about 2:35 p.m. Tuesday, Aug. 3 when the vehicle she was driving was struck by another vehicle at the intersection of Dogwood and Willoughby roads south of Heber, the California Highway Patrol reported.

The deceased was identified as Fernanda Miramontes Martinez by the county coroner’s division on Wednesday, Aug. 4. She was the vehicle’s sole occupant and reportedly died of blunt-force trauma, a CHP collision report stated.

The driver and only occupant of the second vehicle, solely identified as a 29-year-old male resident of El Centro, sustained a minor laceration to his right hand, the CHP collision report stated.

Following the collision, both vehicles ended up being submerged in the nearby Central Main Canal along the right shoulder of westbound Willoughby east of Dogwood.

Miramontes Martinez was travelling east on Willoughby Road in a red Jeep Compass when for, reasons still under investigation, she drove into the direct path of a white Ford F-250 traveling north on Dogwood and driven by the El Centro resident, the CHP report stated.

Both vehicles were fully submerged in about 4 feet of water with occupants inside both, according to the Highway Patrol’s traffic incident page on Tuesday.

Highway Patrol, county fire, and the Sheriff’s Office had responded to the scene. Imperial County firefighters at the scene were able to clear one vehicle and were attempting to reach the second vehicle at the time of the incident, according to the CHP incident report.

Radio scanner traffic, Facebook posts, and live television media reports from Aug. 3 also described how first responders were assisting in recovery efforts and that a deceased person was found in the canal.

Previous
Crop Report Plus: Imperial County Saw $4.4B in Ag Impact in 2019