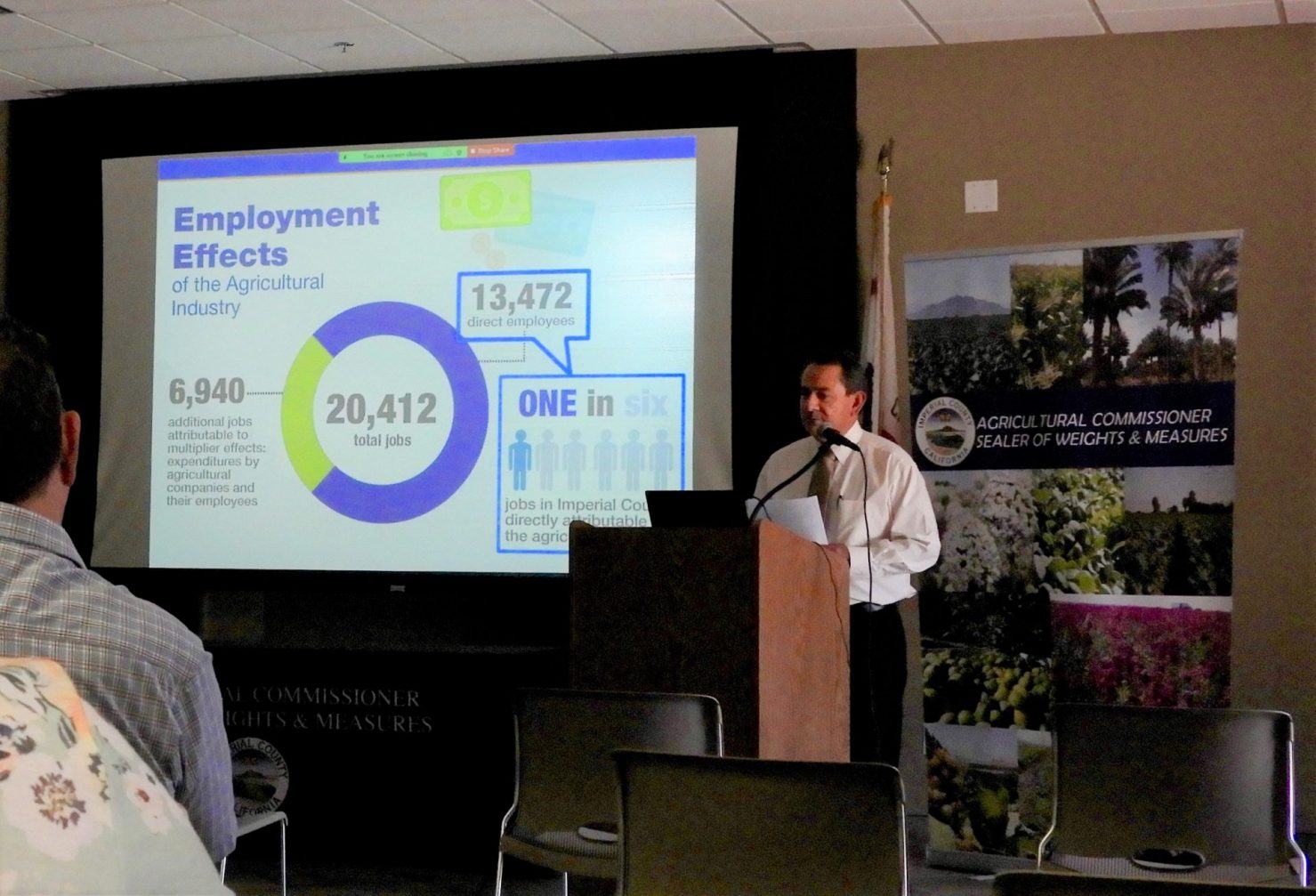 IMPERIAL — Boasting an overall benefit to Imperial County of $4.4 billion, Agricultural Commissioner Carlos Ortiz called on local students to study agriculture as he presented the 2021 Crop Report Plus, citing the fact that farm industry has the highest economic output of any sector and is the second-highest producer of local jobs.

Different than the annual Imperial County crop report Ortiz’s office produces, which is due to be released Aug. 10, the Crop Report Plus is a more extensive study of the agriculture industry and looks at ag’s multiplier effect in the region, meaning its direct and indirect benefits.

“The message I want to send out to any high schoolers who are interested in ag, as you move forward into college and you were thinking about what major you would like to be, consider making your major ag,” Ortiz said. “Go get your degree, and come back to Imperial County and make a difference.”

First introducing the report during the county Board of Supervisors meeting on Tuesday morning, Aug. 3, the Ag Commissioner’s Office held a special public unveiling of the document later in the afternoon at the Farm Credit West Ag Center in Imperial as well as presented it to the Imperial Irrigation District board.

Ortiz, along with senior researchers from Agricultural Impact Associates, the consulting firm that worked with the county to produce the report, Dr. Jeff Langholz and Dr. Fernando De Paolis, explained the results of the Crop Report Plus, which took a deeper dive in the 2019 data for a more comprehensive approach.

“We knew ag was important here in Imperial County, but it’s even more important than we knew,” Langholz shared as he presented to the small crowd at the Farm Credit West Ag Center.

The other $1.445 billion came from what the report referred to as multiplier effects. Multiplier effects were divided into “indirect effects,” or the “business-to-business” purchases by the ag industry, and the “induced effects,” or what the ag employees spend locally on a personal level.

The Crop Report Plus did not limit itself to just money that was produced, also exploring how many jobs the agricultural industry brought into Imperial County. A total of 20,412 jobs were either directly or indirectly the result of industry. Of those jobs, some 13,472 were directly tied to agriculture, or 16.8 percent of all county employment or about one out of every six jobs.

Another 6,940 jobs are estimated to have been created to accommodate the expenditures that agricultural companies and their employees create naturally by existing in the Imperial County.

The Crop Report Plus also highlighted the stability of Imperial County’s agricultural industry. This is determined by how many different crops a county grows, and at what proportions they are grown, and is summed up on a scale from 0.00 (wherein all crops grown were the same as any other county) to 1.00 (where all 72 crops that can be grown in California are grown in equal proportion). Of the 20 counties the Agricultural Impact Associates have consulted with, Imperial County scored the highest in stability, rating 0.69, making it one of the most stable places for agriculture in California.

“This report shows the importance of Imperial County agriculture as both an employer and a powerful economic engine,” said Shelby Trimm, Executive Director of the Imperial Valley Vegetable Growers Association, in a media release put out by the county after the presentation. “Every dollar earned creates ripples that support a healthy local economy.”

Jeff Plourd, president of the Imperial County Farm Bureau, said much of the same in the county’s press release.

“The Crop Report Plus is a great representation of Imperial Valley agriculture and the value it brings to our county,” Plourd stated. “We appreciate the Ag Commissioner’s Office having this report developed which highlights the critical role agriculture plays in sustaining a healthy local economy.”

The first Crop Report Plus for Imperial County was released in 2017, based on 2016 data. At the time of its release, Imperial County was one of just a handful of regions that commissioned such a report from Agricultural Impact Associates. Since then, numerous other counties have now had their own done.

The Crop Report Plus is not just a valuable tool for Imperial County government officials, it’s also necessary information for the local ag researchers, according to Dr. Oli Bachie, agronomy adviser and county director of the University of California Agriculture and Natural Resources’ Imperial County Cooperative Extension.

“The Crop Report and the Crop Report Plus is very, very important. It is one of the main resources that we at the Imperial County Cooperative Extension use for looking at production,” Bachie said after the afternoon presentation. “We can’t work without it. It’s very valuable and heavily used at the cooperative.”

Next
Calexico Woman Dies in 2-Car Crash South of Heber