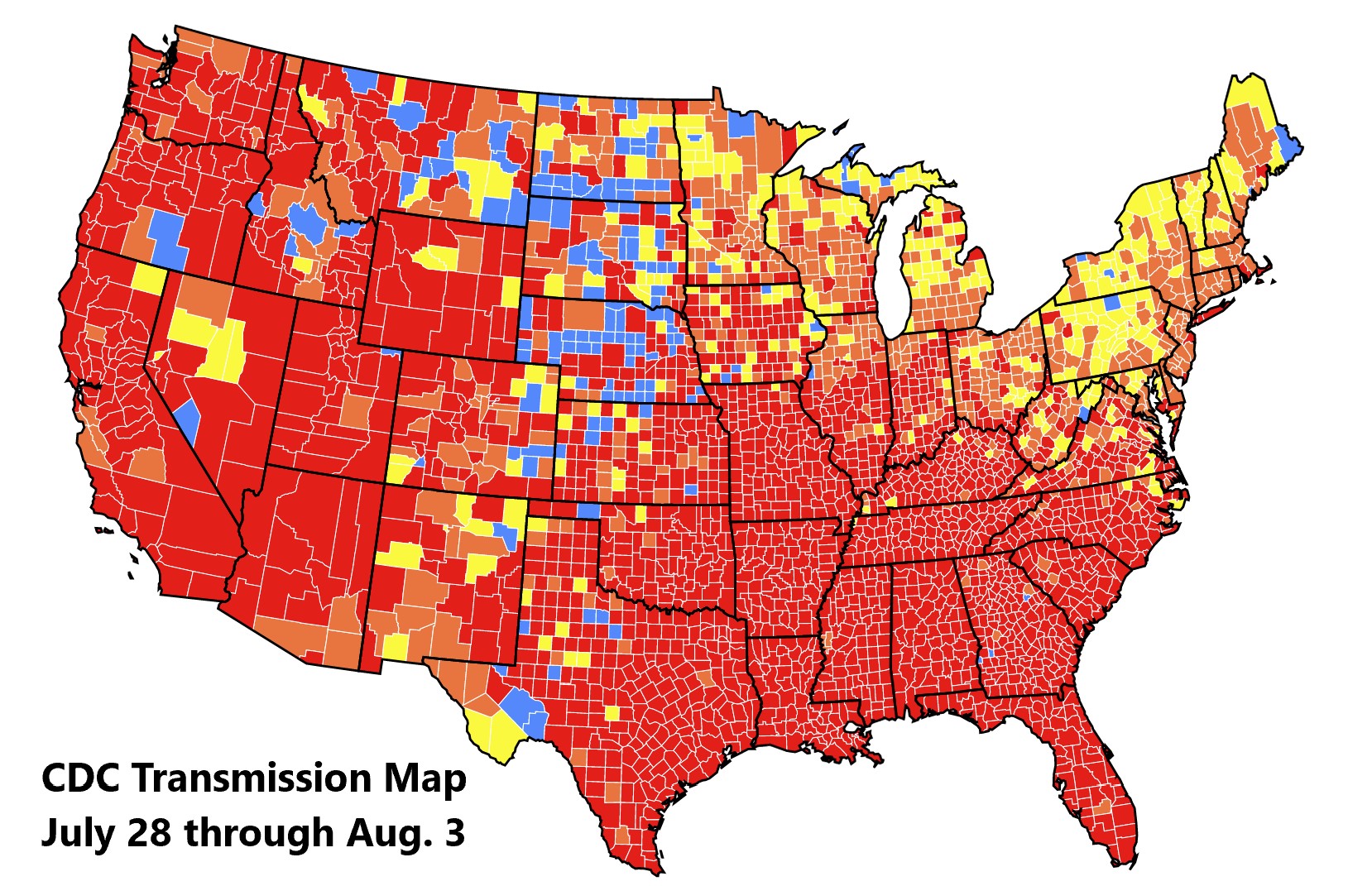 Imperial County is now in the red and "high" on the most recent COVID-19 transmission map developed by the U.S. Centers for Disease Control and Prevention for the period of July 28 through Aug. 3. | CDC GRAPHIC
In COVID-19Regional News

Active COVID cases have nearly doubled in Imperial County in the past few weeks and more cases of the Delta variant have been detected after holding steady for more than three weeks.

Meanwhile, the U.S. Centers for Disease Control and Prevention has moved up the region on its national heat map as a “high” transmission county, along with most of California.

On the positive end, hospitalizations in the Imperial Valley remain relatively low and stable, and vaccination rates continue to stay ahead of the state average, Imperial County Public Health officials said this week.

“It is Delta that we’re currently the most concerned about (nationally), most of that just because it has turned out to be so much more contagious than the other ones. Some of you may have heard that it’s kind of compared it to chickenpox, which is a very contagious disease,” said Imperial County Public Health Officer, Dr. Stephen Munday, as he updated the Imperial County Board of Supervisors on Tuesday, Aug. 3.

“Delta has really pretty much pushed all of these other variants out of the way because it’s so much more contagious. … Now we’re concerned that there could be the more contagious variants that are coming along,” Munday added.

The Delta variant now account for more than 83 percent of all new COVID cases in the United States, according to the CDC.

For several weeks, the number of Delta cases discovered in Imperial County had stayed frozen at two after their initial discovery July 7 through public health lab gene sequencing.

Yet Tuesday’s new variant report showed that seven new Delta cases had been detected. Reporting is delayed by a few weeks, according to Public Health.

“Sequencing is quite a labor intensive, robust lab process, so unlike just the regular testing, in which you can get the turnaround done in some cases within an hour or so … the whole genome sequencing really isn’t amenable to that,” Munday said last week in a more in-depth report to the county board.

The Delta (B.1.617.2) variant of SARS-CoV-2 virus, which now totals nine cases in the Valley, is said to be 40 percent to 60 percent more transmissible than the original Wuhan strain, with a viral load in the pharynx (the area swabbed in a COVID test) more than 1,000 times higher, according to data from the American Society for Microbiology.

All but one variant of concerns — the strains tracked because they are thought to be more aggressive and transmissible — rose since last week for a total of 198 variants detected (178 on July 27). The Gamma variant (P.1) variant, or what has also been referred to as the Japan/Brazil variant, rose to 115 cases since December and the Alpha (B.1.1.7) variant, or what is widely referred to as the U.K. strain, has been seen in 73 times.

“Gamma was a concern, still is a concern, but was more of a concern earlier, in part because there were some evidence that it might not respond to therapeutics as well as some of the earlier versions of the virus,” Munday said on Tuesday. “But that hasn’t turned out to be an issue because Gamma for the most part is on the way down.

“Imperial County, we’re falling a little bit different variant curves than the areas that are surrounding us,” the doctor added.

COVID-positive cases have been on a steady rise and seem to have jumped a bit in recent weeks. At 254 active cases as of Tuesday morning, that is an 84 percent increase over July 20, when there were 138 active cases.

Also, this week, the CDC changes its color-coded ranking for Imperial County from orange, for “substantial transmission,” to red, for “high transmission.”

This CDC color-coded system is not to be confused with the color-coded system California ended on June 15 that was attached to the opening of business and public sectors, Imperial County Public Health Director Janette Angulo explained last week.

Red spread is defined more than “99.99” cases per 100,000 persons in the past seven days and positivity percentage rate greater than 10 percent.

Imperial County’s state data, adjusted to remove state inmate populations and out-of-county and out-of-country cases that are detected locally, showed 10.10 new cases per 100,000 residents per day for the week of July 18-July 24 and a positivity rate of 6.1 percent for the same period.

This was a steady increase over the past several weeks, when a low of 2.3 new cases per day per 100,000 residents were recorded for the week of June 13-19 and a low positivity rate of 2.6 percent was recorded June 24-30, according to Imperial County Public Health.

One thing that is being noted throughout the nation are “breakthrough infections,” where the vaccinated population is still getting COVID.

According to Public Health’s variant report from Aug. 3, only 5 percent of detected cases so far have been from confirmed vaccinated persons, 54 percent are from the unvaccinated, and in 41 percent of the cases vaccination status was not known.

Public Health officials have said, these “breakthrough infections” do not indicate a failure of the vaccine; rather, it speaks to the ability of COVID to learn, modify and adapt.

“The vaccines are working, there’s been a lot of confusion about that. The bottom line is, these vaccines are very effective, especially at keeping people from getting really sick, and getting hospitalized or ending up on a ventilator or dying,” Munday said last week.

“However, they’re not perfect. And because of the sheer number of infections that are taking place, and the sheer number of people that have been vaccinated, because a small percentage of them don’t work, maybe because somebody’s immune system isn’t strong enough or for whatever reason along those lines, we’re going to continue to have cases,” he told the county board on July 27.

“As far as vaccination, over 220,000 first and second doses (have been administered) for Imperial County residents 12 and older,” Angulo said on Tuesday. “That means 84.5 percent with at least one dose, 68 percent fully vaccinated (63.1 percent for entire state), and a 16.4 percent waiting for a second dose (of Pfizer or Moderna).”

As cases rise, Angulo presented comparative data for the surrounding region, something she doesn’t always do in her weekly updates to the board and public.

In addition to the positive vaccination efforts, hospitalizations are stable.

“Hospitalized patients Imperial County is registering 8.2 (per 100,000 residents) and this is a 14-day average. And we’ve had zero percent increase when it comes to hospitalizations. We’ve maintained pretty stable and in single-digit numbers for quite some time now,” Angulo shared.

El Centro Regional Medical Center has a total hospital census of 77 patients on Wednesday morning, Aug. 4, seven of which were COVID-positive, with an intensive-care unit census of six.

For Pioneers Memorial Hospital in Brawley, there were 51 total patients, four of which were COVID cases, with an ICU census of four (only one of those was COVID-positive).

Health Officer Munday continued to clarify the masking guidance for schools as the Valley’s youths get ready to return to the classroom.

“The state has put out a specific guidance that is applicable all across the state for all schools, public and private. And in that there is mandated masking, for students and for the teachers and other staff when they’re with the students,” Munday said. “Now the enforcement piece has been left up to the schools.”

Last week, Munday explained what has continued to make headline across the state this week — the state health officer order from July 26 requiring proof of vaccination for healthcare staff members in acute care facilities and other clinic settings, as well as in congregate living conditions like skilled nursing homes and prisons and jails.

“Even though Imperial County has actually done a great job of vaccinating,” Munday added toward the end of his report Tuesday. “By itself, that’s not enough. We really need to get more people vaccinated. In the meantime, we need to get people to continue masking.”