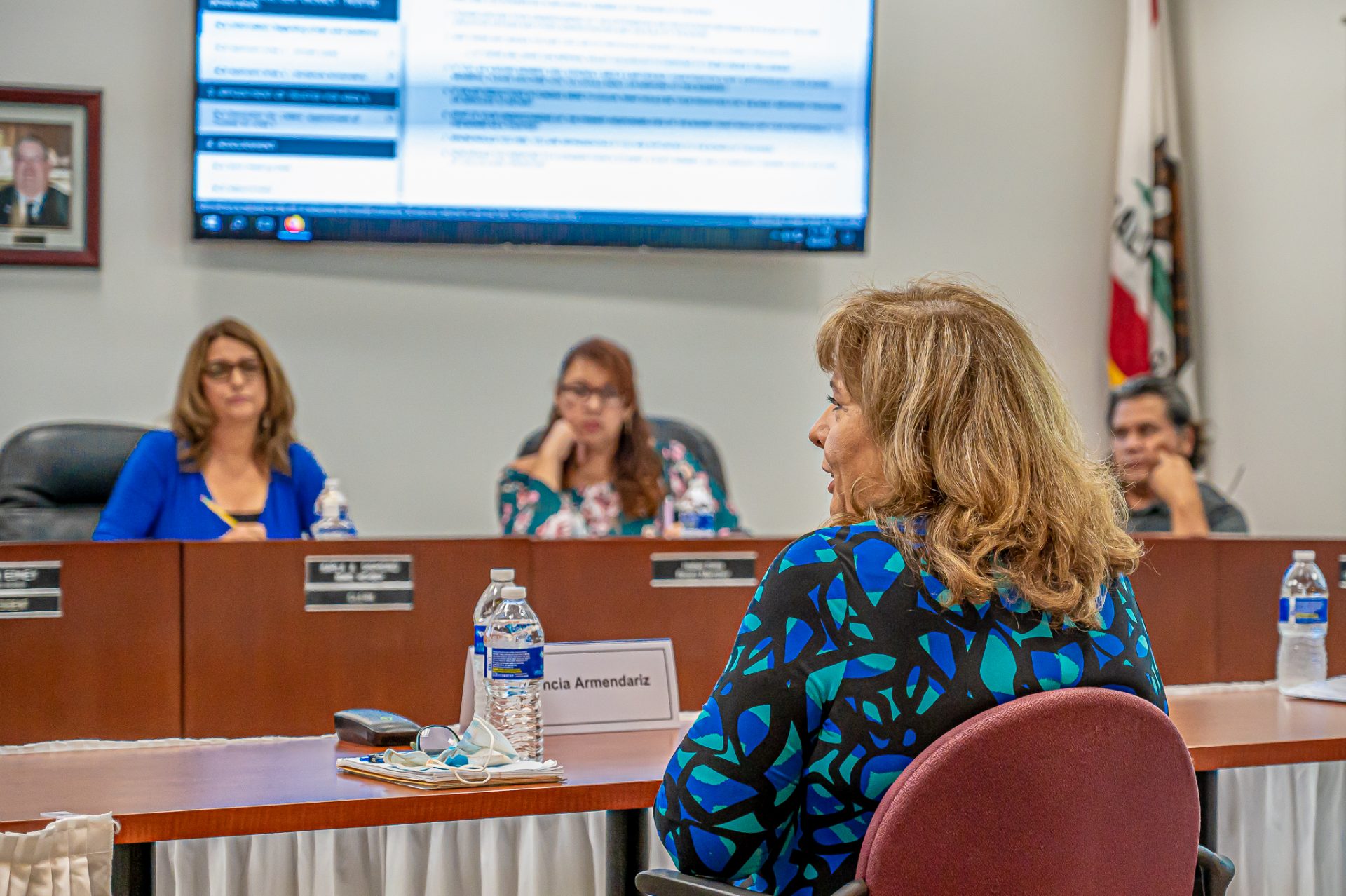 Longtime Calexico Unified School District employee Hortencia Armendariz is interviewed by six members of the Imperial Community College District board on Monday, Aug. 2, prior to the board appointing her to serve out the remainder of the district's vacant Area 1 seat. | CAMILO GARCIA JR. PHOTO
Home
Education
Share

IMPERIAL — As the Family Resource Center coordinator for the Calexico Unified School District, Hortencia Armendariz has made it her purpose to help students further their education in any way she can.

Admittedly, that assistance has often extended beyond Armendariz’s responsibilities as the center coordinator, but one shouldn’t expect to ever hear her complain about it.

On the contrary, the longtime Calexico resident has for years gladly set aside time during her Thanksgiving holidays to help high school seniors apply for college, as well as financial aid.

Now, as the newly appointed Area 1 trustee for the Imperial Community College District, Armendariz will continue in her role to advocate for students, albeit at a higher level.

“It is such a blessing to be able to do what you love,” Armendariz said in a phone interview on Tuesday, Aug. 3.

Her appointment came during a special meeting of the board, which oversees Imperial Valley College, on Monday, Aug. 2. The board voted unanimously to appoint her.

The hourlong meeting provided college district board members an opportunity to interview both Armendariz and fellow Calexican, Ismael Lopez, who had also applied for the board’s Area 1 vacancy.

Prior to becoming the Family Resource Center coordinator, Armendariz had been employed by Calexico Unified as an instructional aide, teacher, resource teacher, vice principal, principal, and district office administrator.

Yet, her venture into the field of education was not by design. She initially enrolled at IVC to study political science in the hopes of pursuing a career as an attorney. While there, she had a work study class that assigned her to work at a local preschool. The temporary vocation proved fateful.

“It was really IVC that got me my love of working with children,” Armendariz said.

After graduating from IVC with an associate’s degree in liberal studies, she went on to graduate from San Diego State University-Imperial Valley before obtaining a master’s degree in educational leadership from the main SDSU campus.

During her interview by the six-member IVC board on Aug. 2, Armendariz made it clear that her desire to serve on the board was an extension of her passion for serving the community.

“When you get to know me, you’ll know that I’m a person who always wants to help serve,” she told the board in response to a question that specifically asked why she wanted to be a board trustee. “When I found out about the opening, I right away thought, that is something I want to do.”

Both Armendariz and fellow trustee candidate Lopez fielded the same questions from the board and its student trustee.

Lopez is an accountant who previously served on the city of Calexico’s financial advisory and economic development commission, as well as Calexico Unified’s Measure V and Q oversight committees.

His motivation for seeking a seat on the board was to further help diversify job opportunities so that local graduating college students would not feel compelled to leave the Valley in search of greater employment options.

“Why don’t we as a board try to help them stay instead of losing them,” Lopez told the board.

The question about what had interested the candidates about potentially serving on the district’s Board of Trustees was also posed on the application both had submitted to the district in advance of their interviews on Aug. 2.

While Lopez’s application simply stated that he wanted to “assist, help and promote better education” for local students, Armendariz’s response was considerably more expansive and included four bullet points that explained her motivation for seeking the vacant seat.

Aside from wanting to serve the community, Armendariz stated she would like to represent the voice of Calexico students, who she described as comprising a majority of IVC students.

And while the board’s predetermined questions did not follow up on the remarks that both Lopez and Armendariz included in their respective applications, she elaborated on some of those statements on Tuesday, Aug. 3.

In her application, Armendariz said she would like to see IVC collaborate with local districts to allow graduating high schools seniors to concurrently obtain an associate’s degree. When discussing the suggestion on Aug. 3, she acknowledged that such an initiative would be dependent on a consensus among students, parents, school districts and the community college. But it is certainly possible, she said, as evidenced by colleges in other states like Texas doing just that.

During her interview with the board, Armendariz also made it clear that whatever initiative she may one day bring to the board for consideration, it would not solely reflect her own interests.

“You will get what Area 1 is telling me,” she said.

Armendariz is scheduled to be sworn into office during the board’s next scheduled regular meeting on Aug. 18. She will serve until Nov. 8, 2022, at which time Area 1 voters will cast ballots to determine who will serve out the remaining two years of the Area 1 seat’s four-year term.

The board’s Area 1 vacancy was created on June 3 after former trustee Annette Gonzalez-Buttner was sentenced to three years of incarceration for her conviction of perjury and grand theft charges related to her 2017 candidacy for the county Board of Education. She was elected to serve on the ICCD board in November 2020.

Next
Motorcyclist Flown Out After Accident North of Calexico