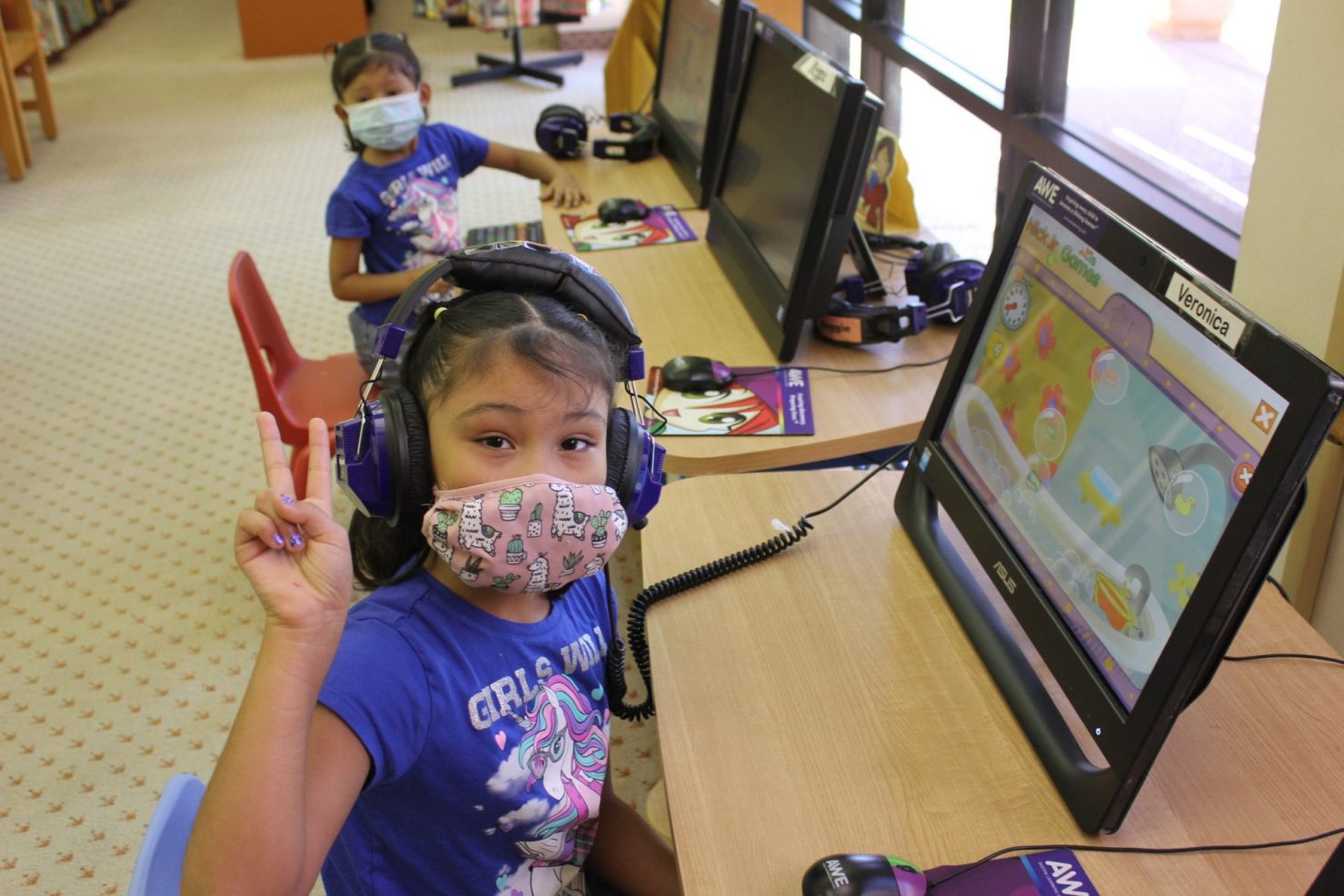 Asha Hernandez (foreground) and her sister, Ashlynn (rear), play on the bank of public computers at the Camarena Memorial Library in Calexico on Monday, Aug. 2, the first day the library had reopened to visitors since the pandemic closed it in March 2020. | LIZETH LEGASPI PHOTO
Home
Regional News
In Regional News

CALEXICO — There were limitations, of course, but the Camarena Memorial Library got back to the business of a being a destination point for the community on Monday, Aug. 2.

Library manager Lizeth Legaspi and her staff were on hand throughout the day to greet visitors coming in to browse the actual stacks or use community computers for the first time since the pandemic shut down the Encinas Avenue location as a physical hub of activity in March 2020.

“It’s great that we’re able to greet people. I mean, we still see people through our curbside (pickup), but it’s not the same as having them inside the building,” Legaspi said during an interview midday Monday. “I saw a couple of people today, and they were browsing through the shelves and picking their own books … they want to pick their own books even though we’re being offering book bundles.”

Several children and families came in Monday to use the computers and play in the child’s area, Legaspi added.

“I was pleased. It’s a great feeling” to be open again, she added.

Libraries have often been a municipalities’ connection to its community, and Camarena was a big part of people’s lives during the pandemic, when so many areas of public life had limitations. And that fact did not go unnoticed.

During a community survey in which the satisfaction of Calexico residents was gauged in a number of areas, results shared during a strategic planning meeting on July 28 showed Camarena library ranking No. 2 of 23 areas of satisfaction, behind only the beloved Calexico Fire Department, which functioned as the city’s hospital on wheels during a public health emergency.

Despite the building being closed, Legaspi and staff made curbside pickup of books available, and made many community programs available online or adapted them from a take-home environment.

“Obviously, (it was) a completely different experience, something we’ve never done before,” Legaspi said Monday.

Specifically, Legaspi spoke of how the library took its early child development programs and adapted them for Zoom audiences.

After a first session was finished, she said, “it was so emotional” because even though the children were not together in the same room, “in a sense we were. So, it was a was a completely different experience.

Activities for Mother’s Day and Father’s Day were done as activity kits that could be picked up from the library and done at home.

“So, we still kept in touch with the community,” the library director added.

Returning patrons must wear a face mask upon entering the building and keep it with them during their visit, and temperatures are being checked as people come in. Legaspi said visitors are also being asked to get hand sanitizer upon coming into the building and to maintain a 6-foot distance from other library users.