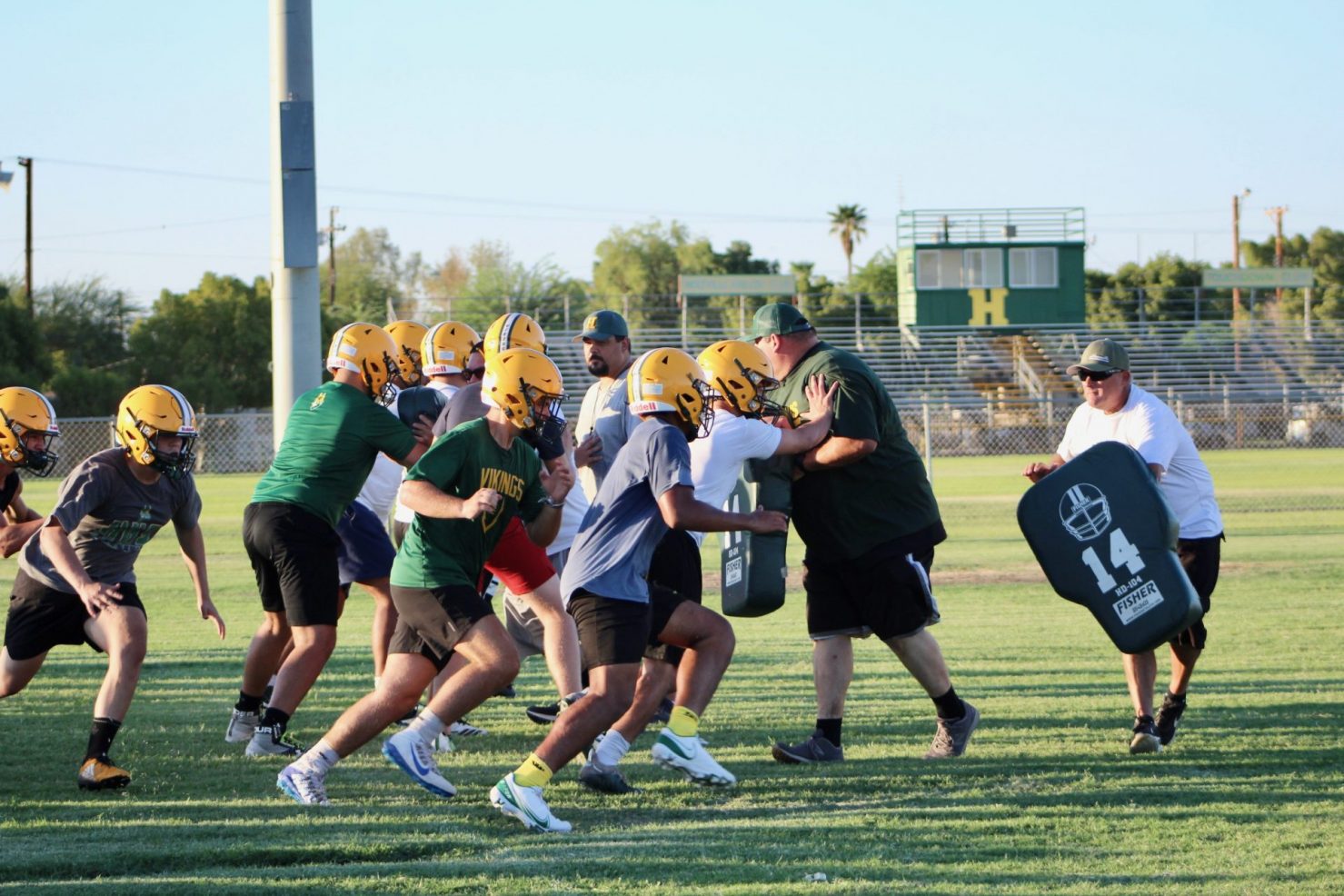 The Holtville High School football team goes through a blocking drill during practice on Monday, Aug. 2, at Birger Field in Holtville. The Vikings open the season against Southwest High in El Centro at 7 pm on Aug. 20. CATHI PHILLIPS LARIOS PHOTO
Home
Featured Stories
In Featured StoriesSports

HOLTVILLE — After graduating 18 seniors from the 2020-21 roster, it’s understandable why there are questions surrounding the current Holtville High School football team.

Only three returning players have carried the ball in a varsity football game, nobody who threw a pass last season is back on the roster and returning receivers only have 13 receptions from last season. Defensively, 69 percent of the tackles from last season (263 of 383) have graduated.

“Offensively I think we can be as good or better than last season, but our defense is where we are going to need to pick it up,” said Jason Turner, Holtville’s fifth-year head coach. “We are going to run the ball and punish teams on the ground.”

On the defensive side of the ball, the Vikings are going to miss the play of middle linebacker Ryder Merten, who garnered more than 90 tackles himself in just six games last season. Also missed on defense will be defensive end Jonathan Heraz, linebacker C.J. Nunez and defensive back Isidro Aguirre.

“We are putting a tremendous amount of focus on defense and going back to the basics of just tackling,” Turner said. “I’ve told our coaches to forget about schemes for now and just teach these kids how to tackle.”

In addition to a COVID-shortened, eight-week season in the spring, there was no junior varsity or freshman football played, causing a lost year for younger players to learn the game. The lack of youth football or middle school flag football also left young players without any chance to gain experience.

“Really we’ve got two freshman classes this year because our sophomores didn’t get any real time on campus last year,” said Turner, who coached the Vikings to a Desert League championship in the spring. “Because of COVID these kids had a gap year and there’s about half the kids out there I’ve never seen before.”

The Vikings went 4-2 overall in the shortened six-week season, including 3-0 in Desert League play, beating Palo Verde, Vincent Memorial of Calexico and Mountain Empire of Pine Valley for the league title. For the fall sports, there were no CIF-San Diego Section playoffs last season.

Holtville is back in the Desert League for 2021 with the same teams, plus the addition of Calipatria, which elected not to field a team in the COVID-shortened campaign. The Vikings enter the season as the top-ranked team in the CIF-San Diego Section Division V.

Offensively, the Vikings return senior Desert League Offensive MVP Payton Iten, who rushed for 694 yards on 93 carries and 10 touchdowns in six games, averaging 115.7 yards per game and 7.5 yards per carry.

Along with Iten, two or three other running backs could step up and get a lot of carries this season, including senior Donovan Johnston and sophomores Bryce Buscaglia and Seth Iten.

“We’ve got some good running backs. Our offensive line is young, but they’re working hard and they’re going to get the job done,” said the 17-year-old Payton Iten. “We did lose a lot of seniors from last year but we’ve got some players back that are going to step up.”

One familiar face back for the Vikings is under center with senior quarterback Spencer Hilfiker. The senior was Holtville’s starting quarterback as a sophomore but didn’t play during the COVID-shortened season in the spring.

Hilfiker threw for 1,290 yards in his sophomore season of 2019, averaging 14 yards per completion and 143.3 yards per game. He finished the season with 14 touchdown passes and 12 interceptions.

“Spencer has been working hard this summer to get back into shape and get ready to play quarterback,” Turner said. “He’s aware we are a run first team, but we are more than willing to throw it when the opportunity presents itself.”

The Vikings have a favorable schedule with seven home games and just three road contests. Holtville opens the season in a nonleague showdown at Southwest High in El Centro at 7 p.m. on Aug. 20.

The Vikings then have five straight home games and won’t have to leave Birger Field until Oct. 8 when they open Desert League action in Blythe against Palo Verde Valley.

Next
VOLLEYBALL: Defending CIF Champs Are Back