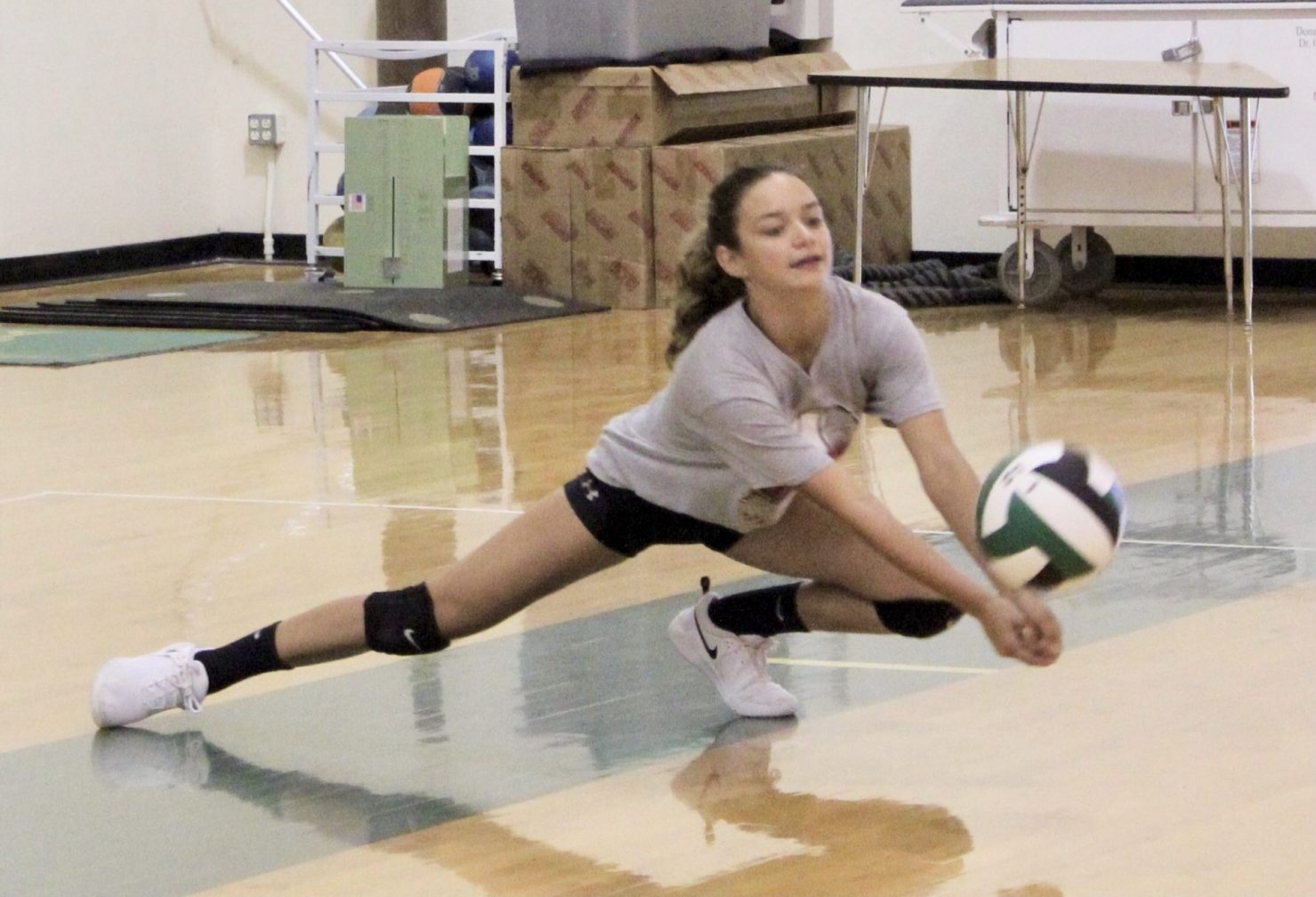 Holtville High School junior Kalli Strahm goes low to return a ball during the Vikings’ volleyball practice on Tuesday, Aug. 3 in the Holtville gym. It’s been 21 months since the Vikings were on the volleyball court after COVID caused the 2020 season to be canceled. | CATHI PHILLIPS LARIOS PHOTO
Home
Sports
In Sports

VOLLEYBALL: Defending CIF Champs Are Back

HOLTVILLE — The last time we saw the Holtville High School volleyball team, it was celebrating a CIF-San Diego Section Division IV championship. That was in November 2019.

The only sport COVID completely wiped out in 2020-21 was volleyball. Every other sport got either a full or a shortened season.

Holtville volleyball coach Chelsey Strahm, now in her fifth year at the helm of the Vikings, opened practice on Monday, Aug. 2, with very little time to prepare a new batch of players for the opening game of the season, which is scheduled for Tuesday, Aug. 10, at Calipatria.

“It’s exciting to be back in the gym,” Strahm said, after 21 months since her team last competed. “Going into the tryouts we let them know that no team is set and we want them all to be competitive. That competitiveness only makes them better.”

Only two players return to the roster from the 2019 Division IV championship team in senior Orian Anderson and junior Hope Jesse. But the majority of the girls trying out experienced some type of postseason during the COVID-plagued 2020-21 season.

“Most of these girls have postseason experience, it just might not be in volleyball yet,” Strahm said. “We are holding them to a higher standard. Most, if not all, of them were at the championship game in 2019 or saw video from it or pictures from it. They know where we want to be at the end of the season.”

Anderson, the lone full-time player from the 2019 Vikings back for the 2021 campaign, will be counted on for her experience and court awareness to help lead the volleyball team in its bid for an Imperial Valley League title.

“It’s a different team than the one that won the championship. We have to come out and play hard and show what this group is capable of and not compare ourselves to that team,” said the 17-year-old Anderson. “This is a super athletic team. We have a lot of players that can do multiple things well on the court.”

Jesse, who was brought up as a freshman to join the 2019 team for its playoff run, has impressed coaches throughout the summer and early in practice.

“Her (Jesse) mental game has gotten so much better,” Strahm said. “She’s come a long way this summer and stepped up her game in a big way.”

Two sophomores who could have key roles on the Vikings’ success this season are setter Lilian Strahm and outside hitter Jasmine Garewal.

“Lily is super athletic and her physical abilities are going to surprise a lot of people,” Chelsey Strahm said. “Jasmine is such a versatile player. She is going to be a big hitter for us and has that ability to put the ball away.”

Instead of one large Imperial Valley League, local volleyball has split into two leagues with the top-five ranked teams, by CIF-SDS standards, competing in the IVL and the four lower-ranked squads competing in the Desert League.

Holtville will compete in the IVL along with Southwest of El Centro, Brawley, Imperial and Calexico. The Desert League will consist of Central, Calipatria, Palo Verde of Blythe and Vincent Memorial Catholic of Calexico.

“Competing in the strong IVL will be good preparation for CIF,” Strahm said. “We set goals at the beginning of every season and of course CIF is the ultimate goal, but I’d like to win a league title. It’s something I haven’t done since I’ve been coaching in Holtville.”

Holtville’s junior varsity will get things kicked off at 5 p.m. on Tuesday, Aug. 10, in Calipatria, followed by the varsity game at 6 p.m.