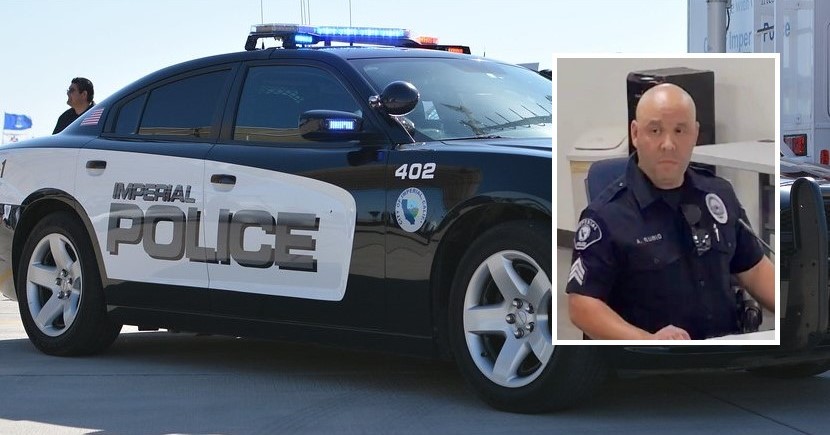 Imperial police Sgt. Albert Rubio (inset) went before the Imperial City Council during its meeting Wednesday, Aug. 4, to get approval for the purchase of two used cars for the department's investigations division. | SCREEN CAPTURE
Home
Regional News
In Regional News

IMPERIAL — Imperial’s Police Department declared two older vehicles as salvage to be sold off but bought two “new” units to put into service in a pair of actions that each received unanimous approval from the City Council.

The council approved using state Citizens Option for Public Safety program funds to purchase two used 2018 Ford Fusions from El Centro Motors that will be equipped to serve as vehicles for the investigations division at a total cost of $35,937.20.

COPS provides funding for law enforcement through the state Controller’s Office to support all aspects of the justice field. The grant-funded purchase will have no direct financial impact on the city.

Imperial police Sgt. Albert Rubio was there to make the request.

“I have already even gone and looked at the cars, and test drove them. They are ready to go,” he assured the council.

In a somewhat related decision as part of the consent agenda, the council approved declaring two police vehicles as surplus to be sold or auctioned, and the money used to offset the cost of future police units.

The City Council approved going out to bid for construction companies on a $2.32 million street rehabilitation project that will bring new asphalt, sidewalks, paint, new gutters, new storm drains and new fire hydrants to 2,290 feet, or less than a half mile, of Second Street from Highway 86 to P Street.

This project site is one street north of the Imperial Valley Fairgrounds and will be paid for by Imperial County Transportation Commission’s Surface Transportation Block Grant Program ($1.84 million) and with Measure D sales tax funds ($475,393), bringing the total to a nearly $2.32 million

The money with come out of the city’s portion of Local Transportation Authority Measure D sale tax revenues.

The city also approved the preparation of an encroachment permit across IID property for the installation of a drainage connection. The Mayfield Ranch Subdivision Unit Number 3C has a retention basin that needs to be connected IID’s McCall Drain A5 at the cost of the developer, Morningside Venture LLC.

City Council member Robert Amparano questioned the ownership of this connection, asking, “Does that mean the cost of maintenance falls to us?”

Jackie Loper, public services director for Imperial, assured Amparano that they will own it and take care of the maintenance, but that it would be no different than any other connection the city has. Again, the board voted unanimously to approve applying for the permit.

The council unanimously approved an emergency action to repair for the water treatment plant for a hair over $45,000.

The city is currently using a backup pump to cover the loss of this booster pump, but City Manager Dennis Morita felt that the city should not risk waiting out the normal bidding process in case the backup fails and the city loses water pressure.

The action calls for the purchase of check valves for the booster system, which are designed to prevent backflow in piping systems.

The council accepted the Barioni Boulevard Waterline Improvement Project as completed and voted to file a notice of completion with the county of Imperial. The cost of the project increased by $663.88 with a change order, bringing the total for th project $409,164.60.

The city made two announcements. The first was the city of Imperial is accepting applications for the Imperial Public Assistance Program, which will help low-income families pay for their utilities.

The second was that the schedule for this year’s Imperial Market Days has been published, with the first Market Days event on Oct. 23 with the theme: “Fiesta De Los Muertos.”

(EDITOR’S NOTE: This story was updated and corrected at 9 a.m. Monday, Aug. 9. The two used cars purchase by the Imperial Police Department are from El Centro Motors and will be used for the investigations division. We strive to be as accurate as possible. )

Previous
Tunnel With No Exit Found Behind Calexico Outlets