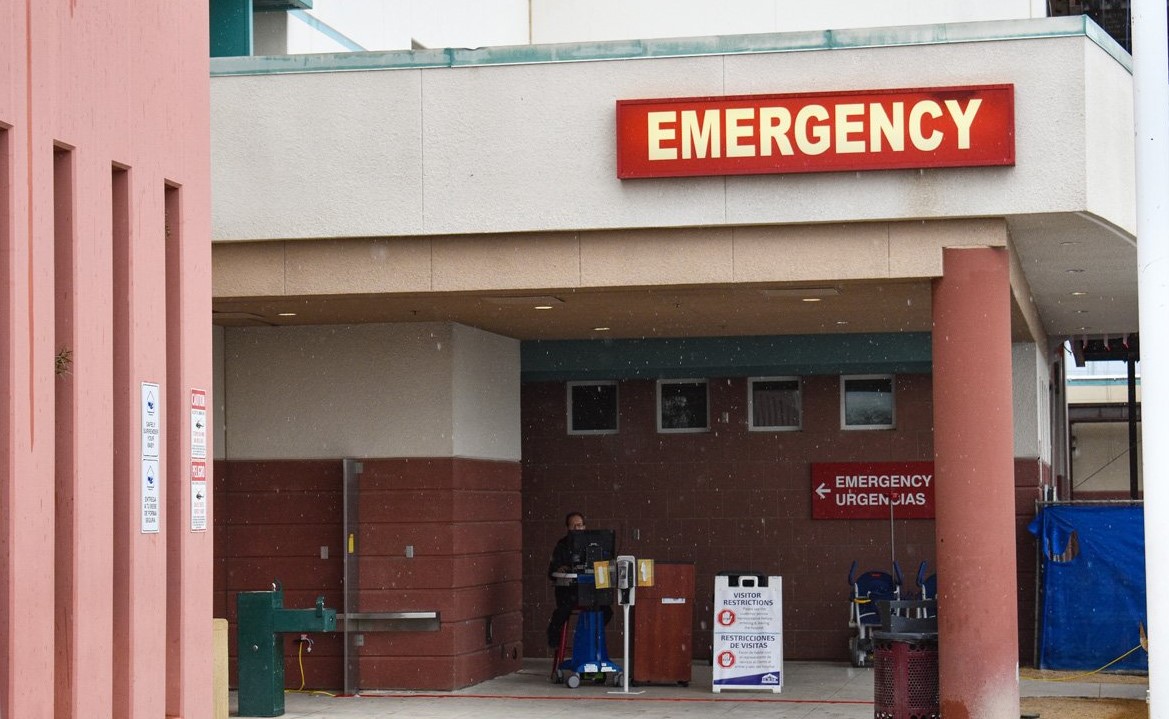 The entrance to El Centro Regional Medical Center’s emergency department is shown in the early days of the pandemic in March 2020. Amid a national resurgence of COVID cases, El Centro Regional saw some eight new cases in three hours admitted to the hospital on Sunday, Aug. 8, for a total of 13 COVID patients as of Monday, Aug. 9, the highest number in at least six months. | FILE PHOTO
Home
COVID-19
In COVID-19Regional News

EL CENTRO — Eight COVID-19 patients requiring hospitalization were seen and admitted to El Centro Regional Medical Center over the weekend, bringing the total of the coronavirus-infected to 13 on Monday morning, Aug. 9, the highest-such patient count seen there for at least six months.

“It’s been a while since the second surge, so we’re moving in the wrong direction,” Edward said, who added that this high of a number hasn’t been experienced at El Centro Regional since the back end of the winter surge.

Edward thinks the public health emergency that has been comparatively slow to come to the Imperial Valley is now here for the long haul. He had previously warned that the favorable hospitalization rates Imperial County was seeing as the rest of the country grapples with steep increases in both case rates and hospitalizations was coming.

“The epidemiological model, whether you believe public health or not, I’m telling you the truth, is an increase worsening in September and climbing in October, and then plateauing in November, and then starting to come back down in December,” he said Monday. “We won’t see a restful week probably in the hospital until the first week in January of 2022.”

The Aug. 9 patient census for Pioneers Memorial Hospital in Brawley was also up, but not as dramatically.

“Overall, today (Monday), we have 44 inpatients, seven are COVID positive. That’s about three to four more than around this time last week,” stated Pioneers spokesperson Karina Lopez in an email.

Some 6,387 COVID-19 patients were hospitalized across the state as of Sunday, which was a 4.3 percent increase from the previous day, according to the state Department of Public Health’s most recent data.

For ICU patients, there were 54 in the state on Sunday, a 4.1 percent increase from Saturday, Aug. 7.

Comparatively, from Sunday to Monday at ECRMC, the patient census increase was more than 116 percent.

What most of the country is experiencing are rapid increases in case rates and hospitalizations attributed to the more transmissible Delta variant that has accounted for more than 80 percent of new COVID cases in the past few weeks, according to the U.S. Centers for Disease Control and Prevention.

The latest variant report for Imperial County was released on Monday afternoon, and the number of Delta cases sequenced has jumped from nine on Aug. 3 to 22 instances of Delta detected. The reporting is delayed by several weeks, so the cases were from mid- to late July.

Now, the U.S. is contending with yet another SARS-CoV-2 mutation that has shown increased resistance to vaccines, the Lambda variant, which has been responsible for highest mortality rate in the world, in the South American country of Peru at 595 deaths per 100,000 people.

No cases of the Lambda variant were detected in Imperial County as part of the latest variant report.

El Centro Regional’s Dr. Edward said people shouldn’t concern themselves with the variants as much as they should with vigilance in the face of across-the-board increases.

“It’s beyond Delta. Let’s not worry about what kind of variant there are … There is Lambda, others … there’s a whole bunch of variants,” he said.

“Let’s keep in mind that COVID is COVID, regardless of the type of variant, and yes, when it comes to variants with the level of contagiousness, or transmission, it does vary. But again, COVID is COVID, and we can’t let our guard down,” she said on Monday.

That is where Edward thinks the community has grown careless. He said there are those who continue to not trust vaccines and resist vaccination, and those who feel that because they are already vaccinated that they are safe.

Data is proving both sets of beliefs to be inaccurate, the hospital CEO thinks.

In general, there seems to be a return to what he calls “risky” behaviors that have not been seen for many months. He cited a story one of his staff members told him in recent days in which a local party of 40 teens were all exposed to COVID due to one 15-year-old girl being ill, which he added did result in additional COVID-positive cases.

“We’re asking, the hospital is asking, the community to go back to being beyond careful, with masks and gathering, washing your hands, all this stuff,” Edward said. “Please emphasis this.”

He said vaccination does work and the vaccine is keeping people from getting severely ill and dying. The cases now inside ECRMC are not as severe as those once experienced, Edward said, but the vaccinated are not safe immune either.

Actual hospitalization rates for COVID patients who have been fully vaccinated are extremely low, according to a July 30 report from the Kaiser Family Foundation. However, that report is based on observed data through July 22, and it’s unclear how much that has changed since then.

“Please don’t be complacent,” Edward said. “They’re not as severe admissions, but at the same time, risky behavior of having 40 children at a party?”

Next
Tunnel With No Exit Found Behind Calexico Outlets