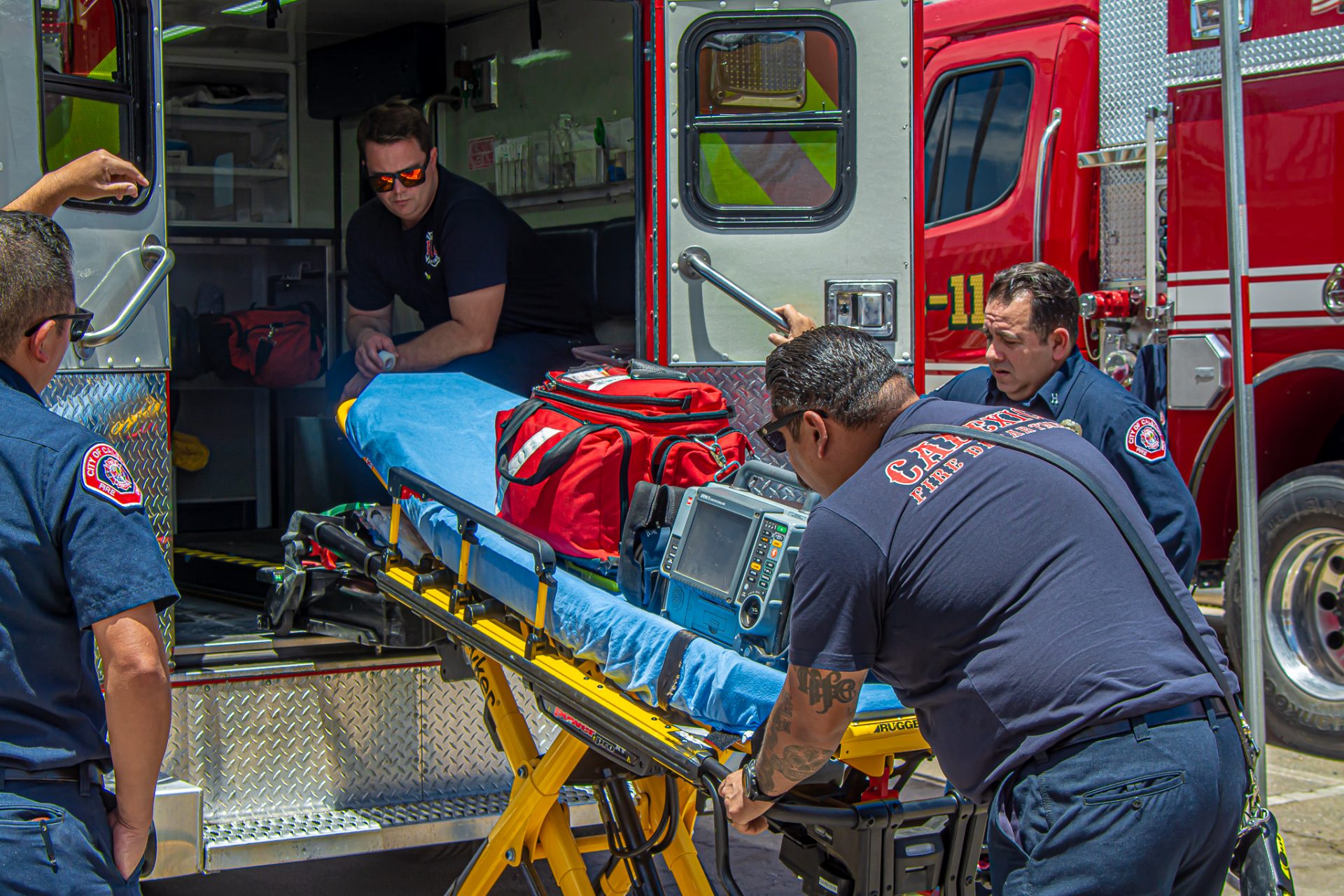 Calexico Fire Department paramedics and firefighters practice loading a gurney into the department’s new ambulance, Unit 2675, as part of a training session on June 8. Measure H, the city’s 20-year half-cent sales-tax initiative approved by voters in 2010, contributes some $400,000 a year in salaries and benefits for the Fire Department. | CAMILO GARCIA JR. PHOTO
Home
Regional News
Share

CALEXICO — Efficiently and quietly, without much fanfare and zero discussion, two new community members — the only community members who applied — were appointed to what had become the all-but-forgotten Measure H Committee last week.

When the quarterly-convened committee eventually meets again the scheduled third week of December, it will be gathering as a five-member body for, essentially, the first time in two years and two months, having last conducted business in October 2019.

The committee was a Calexico City Council creation born of the voter-approved 2010 Measure H half-cent sales-tax initiative which established that the advisory board would meet monthly — later changed to quarterly — to oversee the use of the measure’s revenue for general expenditures in Calexico’s general fund, or chief operating budget.

Yet since the committee was established as a way to get community buy-in for the 20-year tax referendum, the meeting schedule has been spotty at best, said Norma Aguilar, one of the first appointees to the committee in 2010 and Calexico council member Raul Ureña’s current board designee.

“The city has dealt the citizens a raw deal because they are not being transparent. … There’s a lot of things that the public needs to know about Measure H,” Aguilar said on Tuesday, Aug. 10, “including how it came about, how it’s been implemented, and how it was encumbered by the city.”

Calexico, along with the city of El Centro, has the highest sales-tax rate in Imperial County at 8.25 percent, or 8.25 cents on every $1 spent. California’s base tax is 6 percent, with 1.75 percent coming from a combination of Imperial County-specific taxes such as the Measure D half-cent tax and other countywide taxes. Measure H added an additional .5 percent.

Context is everything, Aguilar indicated, and the public often has a short memory. While she does not take issue with much of the way the funds have been used at various points over the years, the fact that the general tax was passed more than a decade ago by leveraging the community’s faith that it would have a strong role in how the funds were to be disbursed has been disingenuous to say the least.

In short, Aguilar said, the community was told the money would be used for public safety, recreation concerns, senior citizens’ services and — after the original committee got approval many years and councils ago — a contingency fund of 10 percent for natural disasters in the wake of the April 2010 earthquake that did significant damage to parts of Calexico.

The uses haven’t quite lived up to the billing, however.

One need look no further than the current fiscal 2021-2022 budget passed in June that went into effect July 1 to see how the “spirit of the committee,” as Aguilar termed it, has been corrupted. In it, some $848,000 was used to bolster the general fund for “operations” for expenses determined by city staff with no input from the oversight committee.

Granted, some $2.252 million of the $3.1 million generated by Measure H last year has been allocated to its intended purposes, but the amount in question, under the agreement with the voters some 11 years ago, would be that the committee would provide direction on how to use those funds not already spoken for, Aguilar said.

The $848,000 earmarked for general uses this year is nearly double the amount used to augment the general fund in fiscal 2020-2021 ($473,000). Before this decision was made, Aguilar did try to give input, having already been an appointed member of the committee at the time of the development of this year’s budget, but she said she was ignored.

Moving forward, that is something the man who appointed Aguilar said he does not intend to allow again without protest.

Admittedly, council member Ureña acknowledged he voted with the rest of the council unanimously to approve the budget knowing the issues. And that goes for both council member Gloria Romo and Mayor Pro Tem Camilo Garcia, all of whom have heavily questioned the process to use Measure H revenue to offset expenses and cover shortfalls in the past.

“I did speak to councilwoman Romo, and we’re both on the same page. That’s the last budget that we’re going to cast a ‘yes’ vote if that same thing happens with Measure H. We let this one slide just because it was the previous Measure H committee. We didn’t really know. We were aware, but we just said let it slide for this one, this budget needs to pass,” Ureña said on Tuesday, Aug. 10.

“But this upcoming one, no, it doesn’t get an ‘aye’ vote unless there’s something substantial done to reduce the dependence on Measure H,” he continued. “There is no excuse, because now we have a balanced operating budget, we have some COVID stimulus. There should be no reason we were reaching into our Measure H for next year.”

It appears the committee has only recently had just three members, but considering it had not been meeting nor consulted, it didn’t appear to make much difference.

A previously scheduled meeting for May was convened but ultimately cancelled for lack of quorum and technical issues, as Aguilar said she attempted to Zoom in from that evening’s commencement event at San Diego State University-Imperial Valley campus, where she is a staff member and was required to attend.

In addition to Aguilar, the other members were Jaime Duron, who was appointed by council member Rosie Fernandez, and Mayor Pro Tem Garcia’s designate, his wife, Hortencia Armendariz.

During the Calexico City Council meeting on Aug. 4, a full board was installed when the only two applicants up for consideration were appointed. Mayor Javier Moreno appointed Griselda Herrera, a retired registered nurse with the state Department of Corrections and Rehabilitation, and council member Gloria Romo appointed Alma Castro of A&C Tax Service.

Now, the board can move forward, and Ureña and Aguilar are pleased.

“This is the first time in like forever that commissioners actually (will be able to) say something substantial about decisions they’re supposed to be making,” said Ureña, who added the intention is for the committee to function like the oversight committees attached to Measure V and Measure Q with the Calexico Unified School District. His own father sits on the Measure V oversight committee.

For Aguilar, though, who has been around from the start, this new direction serves multiple purposes.

There is, of course, the sentiment that the young Ureña shared, but there is also a historical perspective that once again needs to be put into the current context, so people will understand how past councils and city administrations have hijacked the funding.

She said the current Calexico City Council — the elected policymakers of the people — is trying to do the right thing, but it is city administration that is “dragging its feet,” she said, having grown accustomed to a blank check outside citizen oversight.

Again, no one is disputing its use to pay for police and fire, but Aguilar reiterated that the channeling of the remainder of the revenue toward other uses with no input, fewer meetings, a change of process, and other steps along the way, have happened gradually over the years in a way that might have averted others’ attention.

But not Aguilar’s. She’s watched and grown increasingly frustrated, even seeing the 10 percent natural-disaster contingency fund that had grown to more than $1 million spent for other purposes by past regimes.

“I’m not the chair of the oversight committee, but I am active, and I reached out (Karla Lobatos), asked her, ‘Can you please put together a list of things crucial for people to know?’ She never answered my email, and I reached out to the city manager (Miguel Figueroa) and Ureña, and finally, she told me what was going to be on the agenda, and none of what I had asked for was there,” Aguilar said. That was two months ago.

The committee is overseen by the Calexico Finance Department, with Finance Director Lobatos serving as the administrative liaison. Measure H predates both Lobatos and Figueroa’s arrival to City Hall, and the lack of institutional memory might be what has allowed this unchecked use of the funding stream to linger.

A call to Lobatos’ office on Tuesday went unanswered, with no ability to leave a voice message.

To frame the issue further, Aguilar said around 2009 or 2010, a prior tax measure failed to get voter approval when it was tied to a specific use for public safety and recreation that, by state law, required two-thirds voter approval.

To more easily get the tax measure to pass, she said, it was opened up as a general-use initiative that required just 50 percent-plus-one vote approval, and the oversight committee was established to ensure that the tax-revenue use did not stray from its core mission.

So, on June 8, 2010, Measure H was approved with 60 percent of the voters in favor, according to election records.

“Moving forward, we get the opportunity to share the history of Measure H with the citizens, so they understand what it’s supposed to be for and what the history is, so it doesn’t happen again and so it can stay on the straight and narrow,” Aguilar said.

During what was a relatively short City Council meeting on Aug. 4 that was devoid of a beefy action agenda, City Manager Figueroa’s report to council contained a preview of the meat to come.

He informed the council that at the Aug. 18 regular meeting, the council would get its first look at what he called a “blueprint of the American Rescue Plan Act-eligible activities that we wish to engage the city of Calexico on.”

Figueroa was short on detail about what projects it will include, but said it was developed by him and Lobatos based on prior conversations regarding need with council and staff.

“The ultimate goal for us is to make sure that these monies address the needs that we have city-wide, not only on the service that we give businesses, that we give residents, but also our departments here in the city,” Figueroa said. “I am very happy to share that (we) have put together activities that fulfill those needs.”

Next
El Centro Students Return Amid ‘The ’Rona’