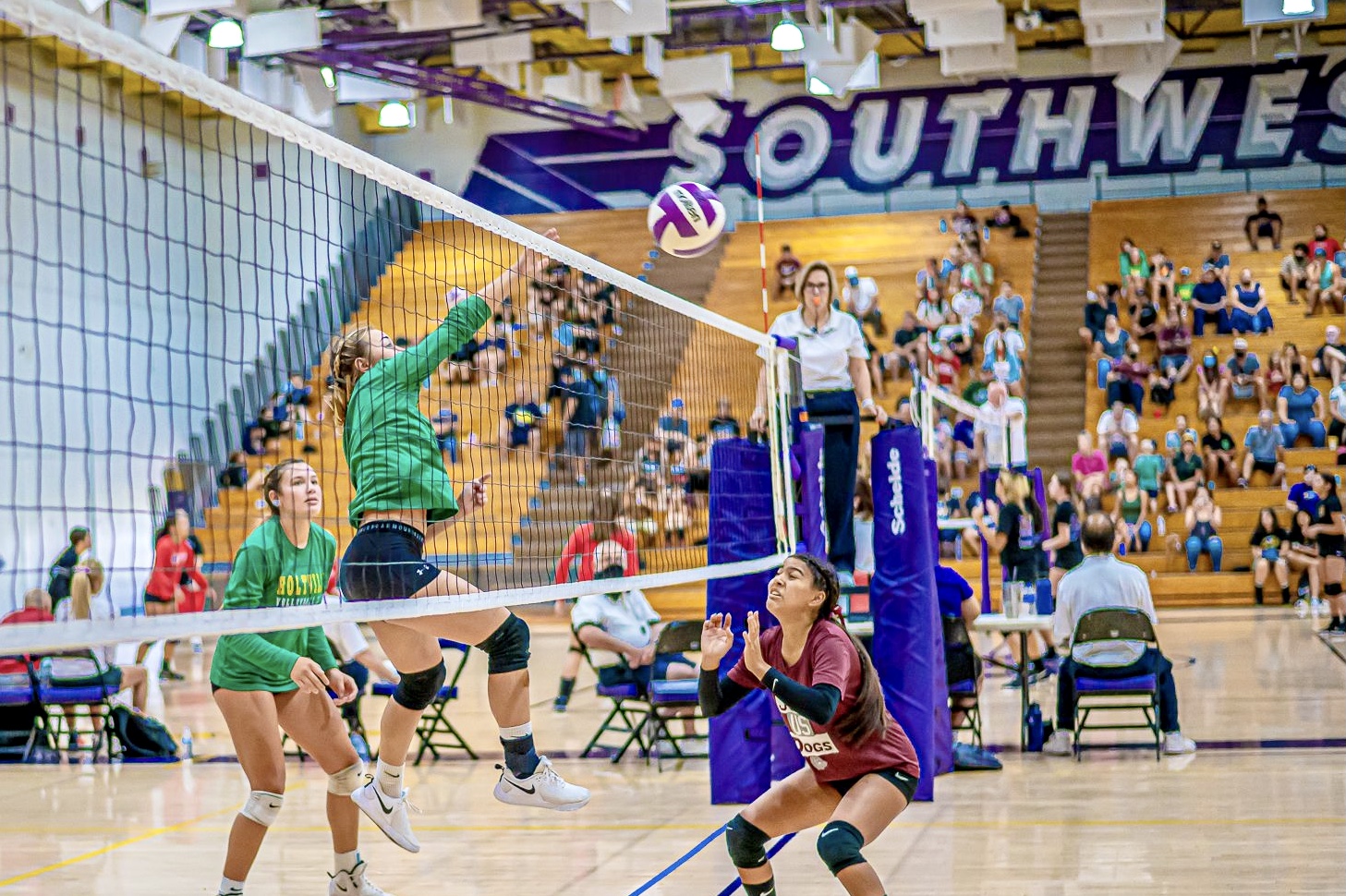 Holtville High School junior Kamryn Walker goes up for a hit during a scrimmage against Calexico at Southwest High in El Centro on Saturday, Aug. 7. The Vikings’ volleyball program was forced to halt practices and cancel games for the week after multiple members of the program tested positive for COVID. | CAMILO GARCIA JR. PHOTO
Home
COVID-19
In COVID-19Local NewsSports

HOLTVILLE — After only six days back on the court, the Holtville High School volleyball program has come to a temporary halt due to multiple members of the program testing positive for COVID.

After 21 months away from volleyball, players and coaches returned on Aug. 2 only to have to pause again after participating in volleyball scrimmages at Southwest High School in El Centro on Saturday, Aug. 7.

“We have a couple members of the volleyball team who have tested positive for COVID. Fortunately, all are symptom-free and got tested because they came into contact with another individual who tested positive,” said C.J. Johnston, Holtville High’s athletic director and vice principal, in a text message sent to parents of volleyball players. “We have canceled practices until further notice. Games are canceled this week.”

“We are working with the local health department and following the guidelines as far as contact tracing and sorting out how far back it goes,” Johnston said in an interview on Tuesday, Aug. 10.

School officials met with Imperial County Public Health Director Janette Angulo late Tuesday, who informed them that due to multiple COVID-positive cases on the team (three or more), the program would be not be able to resume action until Aug. 23. In essence, the program is under a 14-day shutdown, officials said.

So for the Vikings, contact tracing hits all three levels of the program.

“We are still contact tracing and working with our school nurse and health department and reviewing new CDC guidelines that were just released to determine further actions,” Johnston said in the message to parents.

Calexico High faced Holtville in all three levels at the scrimmages and was alerted on Monday, Aug. 9, to members of the Vikings’ program testing positive.

“When we found out we took the freshman and junior varsity and the coaches to get tested and, fortunately, all were negative,” said Humberto Sierra, Calexico High’s head volleyball coach. “So we have been practicing as normal with no girls showing symptoms.”

Sierra said the Bulldogs still plan to traveling to Blythe to take on Palo Verde in their season-opening contest on Thursday, Aug. 12.

The Vikings were scheduled to begin their regular season with a match at Calipatria on Tuesday, followed by a home game against Southwest of El Centro on Thursday. Those contests have been canceled and are being rescheduled to later in the season.

“My concern is this is happening now and we haven’t started school yet,” Johnston said. “I hope we won’t be dealing with this all school year where we start and stop multiple times.”

In spring, the indoor sports of boys and girls basketball and wrestling competed but were required to submit to regular COVID testing. Johnston said the school will be tightening up its protocols and require regular screening prior to practice and games and possibly bring back the required testing to participate in indoor sports.