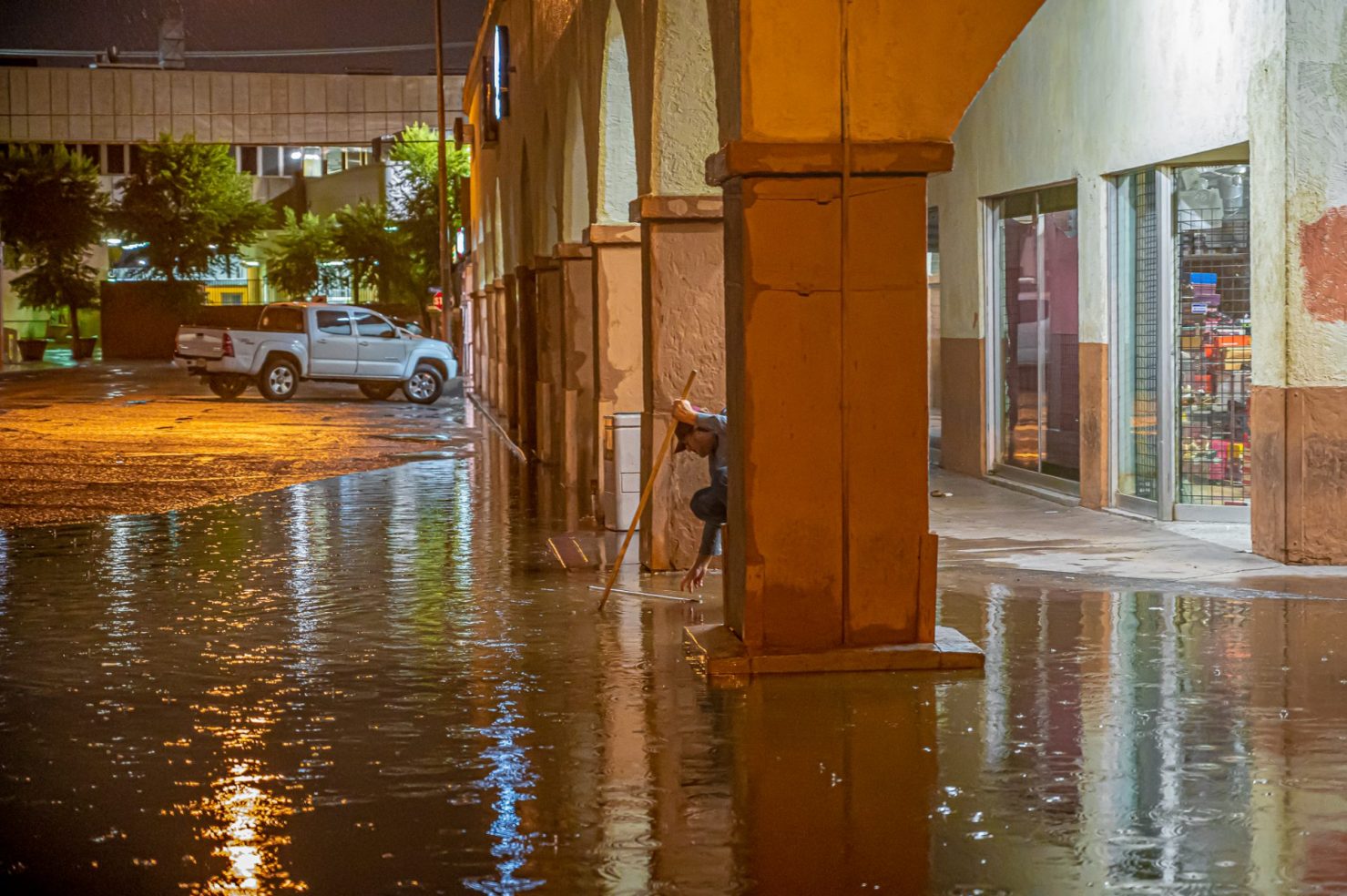 A storm cell from Arizona that descended into Imperial County late Tuesday night, Aug. 10, wasn’t the first system to arrive in the region this year, but it was the strongest so far, according to a National Weather Service meteorologist.

The line of thunderstorm activity dumped as much as two inches of rain in northeastern Imperial County, bringing moderate damage to roads, disrupting power throughout the Imperial Irrigation District’s service area, and causing at least one fire from a lightning strike.

In Calexico, the dust storm downed several trees and toppled a couple of streetlights, but no major damage nor any significant injuries were reported on Wednesday morning, Aug. 11.

Yet the rain did make for a wet and wild scene in downtown Calexico as a few shopkeepers could be seen trying to keep the water from inside their stores when a downspout saw water levels rise past the curb for a brief amount of time around midnight.

Much of the storm activity arrived between 10 p.m. and midnight, bringing winds of about 45 mph and an emergency alert warning of the impending dust storm, said Marvin Percha, a meteorologist with the National Weather Service’s Phoenix office.

Regional rainfall totals weren’t immediately available from Percha on Wednesday as Phoenix was being hit with its own storm system at the time he was speaking with a reporter.

Although there were various radio scanner reports of flooding roads and down trees through the county, no serious injuries were reported.

Calexico fire Capt. Damian Gonzalez said crews responded to back-to-back downed trees, the first at Sterling Court when around 10:50 p.m. a tree took down a fence and an IID powerline, and then, about seven minutes later there were reports of a tree that came through a home and injured an occupant on Encanto Street on the east side.

Gonzalez said IID responded to the first the first and fire crews were turned back from the Encanto call when the tree caused only superficial damage to the home’s eaves and a minor injury to the occupant that did not require treatment.

A third tree fell around 11:20 p.m. on Robert Kennedy Street in which police responded, according to an eyewitness. No injuries were reported in that case either.

A traffic signal went down in the 800 block of Third Street and another on Emilia Street, said Calexico Public Works Manager Liliana Falomir on Wednesday.

No major flooding was reported, but Falomir said public works staff was out vacuuming puddle of water into the city’s storm drain system on Wednesday morning.

Elsewhere in the county, no major incidents were reported to Imperial County fire Battalion Chief Juan Rodelo at shift change on Wednesday morning, although he said a lightning strike around 10 p.m. in a field northeast of Brawley at Highway 115 and Dickerman Road burned less than an acre and heavy rains at the time took care of much of the work for firefighters.

He said the biggest concern there was ensuring fire engines could make it out of the muck.

The biggest damage seem to come to county roads and the IID’s system, and even then few problems were expected to linger through Wednesday.

Reports were still coming in about damages to county roads in the Palo Verde Valley area in the extreme northeast of the county, said Imperial County Public Works Director John Gay, but the usual areas — State Route 22 near Salton Sea and Ogilby Road in the Winterhaven area — did get some washouts and were being cleaned up Wednesday morning.

S-22 was already open, but “Oligby Road is our current focus and will take a few days to repair. It has undermining of shoulders with 3- to 4-foot drop offs,” Gay said. “Staff will be working through weekend if necessary to get the road open.”

He added those roads have dips and washes, and water will come in and bore beneath the pavement, where county crews will typically have to backfill the “undermined” sections.

“As of now, all power is restored except for 25 customers out of Alamorio substation (Brawley area near Silliman and Green),” Schettler said before noon. “Operators are still receiving sporadic no power calls and are working them as they come in.”