Mark Wheeler, Who Had Holtville Ties, Dies from Cancer Battle at Age 43 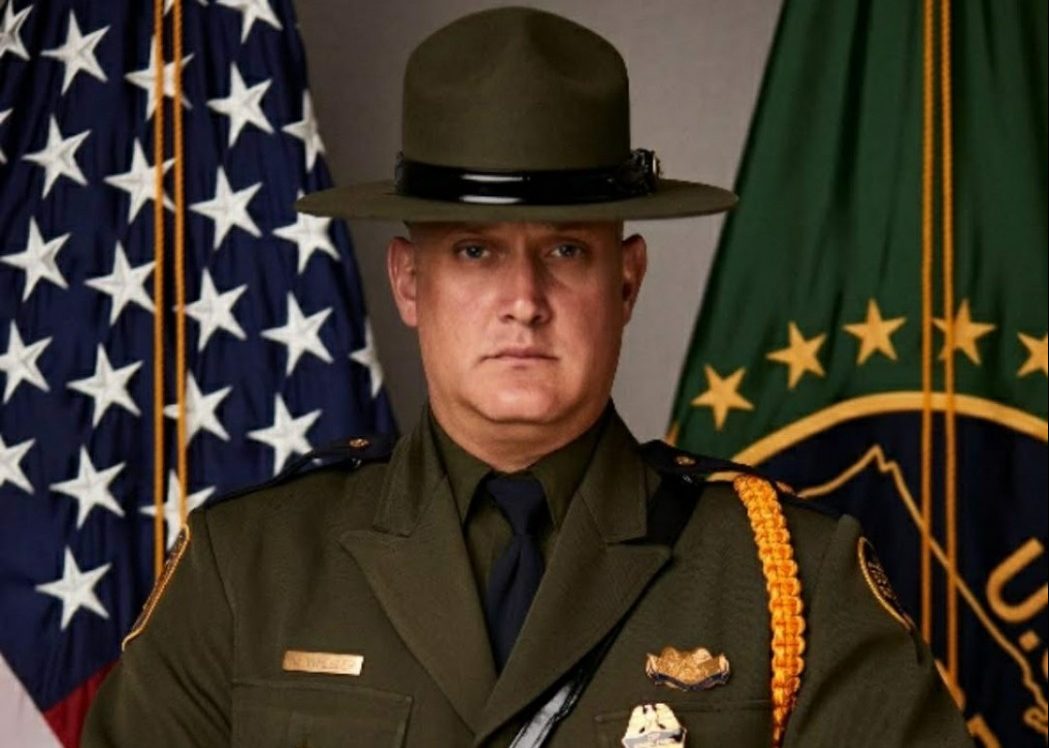 U.S. Border Patrol Agent Mark Wheeler died at age 43 in Yuma from his long battle with cancer. He was a member of the Border Patrol’s Honor Guard and was formerly assigned to the El Centro Sector. He died on Sunday, Aug. 8. | COURTESY PHOTO
Home
Featured Stories
Share

EL CENTRO — A framed picture of a cancer ribbon decorated with the U.S. Border Patrol’s logo and accompanied by the words “Mark Strong” adorns the wall of the El Centro station’s muster room, where agents gather at the start of their shifts.

The picture frame and its two-word motto were placed there by a former El Centro Sector chief to honor local Agent Mark Wheeler, who at the time was battling lung cancer and whose commitment to his work served as an inspiration to his colleagues.

With Wheeler’s passing at the age of 43 on Sunday, Aug. 8, due to his protracted illness, the picture will take on added significance and further inspire local agents well into the future, El Centro Sector Supervisory Agent Joyce Golosino said.

“Everyone knew he was going through a lot, but he always put on a brave face when he came to work,” Golosino said in a phone interview on Tuesday, Aug. 10. “That’s why he is the epitome of strength.”

A native of Flint, Michigan, Wheeler joined the Border Patrol in 2009 and was assigned to the El Centro Sector for field training. While in the Valley, he met his future wife, Karina Romero, of Holtville. Together they would raise five children.

Golosino said she came to know Wheeler during his initial stint with the El Centro Sector and correctly surmised that he had served in the armed forces because of the way he carried himself and the values he embraced.

“I just knew from the get-go,” she said.

A U.S. Marine Corps veteran, Wheeler had served from 1998 through 2005 with the 1st Battalion 24th Marines and was stationed in Kuwait for Operation Enduring Freedom and Operation Iraqi Freedom.

Eventually, the family relocated to Montana when Wheeler transferred to the Border Patrol’s Havre Sector. At Havre, he would join and become the commander for the sector’s Honor Guard. Upon the family’s return to Imperial Valley in 2016, he would continue to perform with the local sector’s unit.

In 2017, Wheeler was diagnosed with stage 4 metastatic lung cancer, which had spread to his tailbone and lower back area, resulting in chronic pain. After an initial round of radiation treatment, he began an indefinite regiment of chemotherapy.

The hardships that Wheeler’s illness brought on the family also served as an opportunity for his friends and colleagues to assist.

Much of his cancer treatment took place in Yuma, where Yuma Sector agents were on hand to offer their support, as well. Because of that bond, some Yuma Sector agents assisted the El Centro Sector’s Honor Guard and Peer Support teams to organize a memorial service for Wheeler on Saturday, Aug. 14, in Yuma, Golosino said.

“He’s touched a lot of people,” she added. “Many people are sad across many sectors.”

Additionally, colleagues from throughout the Border Patrol donated paid time off so that Wheeler could have time to heal. Yet, it proved challenging to keep Wheeler away from work.

His diagnosis was essentially a fight for his life. And as much as his colleagues would have liked to have seen Wheeler resting more often, they also realized that he considered his family, faith, country, and Border Patrol as his reasons for living and the essence of his identity, Golosino said.

“We all talk about him in that sense,” she said. “He always had those values.”

The Wheelers also received extensive support from the Bradley-Keffer American Legion Post 138 in Holtville, of which he was a member, as well as the Legion’s posts in Calexico and Calipatria.

The year Wheeler was diagnosed, the Bradley-Keffer post, with the assistance of agents from the El Centro and Yuma sectors, arranged to have Santa Claus visit the family’s Yuma home with a sleigh full of gifts.

In response to Wheeler’s passing, the El Centro Sector issued a statement on the morning of Wednesday, Aug. 11, which read: “BPA Wheeler’s honorable service to country and all that knew him will always be remembered and cherished.”

Kim Vincent, former president of the Bradley-Keffer American Legion auxiliary Unit 138, said she had gotten to know Wheeler through his membership with the post. At the time he joined, two of his daughters joined the auxiliary unit, too.

The auxiliary’s support of the Wheeler family came in the form of grant funds that went toward mortgage and utility payment assistance. More recently, it used additional grant funds to cover the cost of Wheeler’s $2,000 medical insurance deductible, Vincent said.

“We felt that as an auxiliary and the Legion that that’s what we fundraise for,” she said during a phone interview on Monday, Aug. 9. “Our members in their time of need.”

Vincent, who currently lives in Oklahoma, said she feels extremely grateful for having had the opportunity to speak with Wheeler about a month ago. Though undoubtedly in pain, he wasn’t about to dwell on his condition, she said.

“He was always so positive,” she said. “You could hear the smile through the phone.”

Vincent said she had reached out to Wheeler on behalf of his wife, Karina, who had enlisted her to try to persuade him to take time off from work to rest and heal. Vincent’s appeal appeared to have worked, because Wheeler did take steps to take time off shortly afterward.

That Wheeler was able to maintain a positive attitude throughout his illness and be there for his family, friends and colleagues was not only a testament to his strength and courage, but to his faith, as well, Vincent said.

“Truly God provided for his family with another four years together,” she said.

Currently, a GoFundMe account has been set up on behalf of the Wheeler family and can be found by searching “In the Fight with Mark Wheeler.”

A memorial service for Wheeler will be held Saturday, Aug. 14 at the Yuma Mortuary & Crematory, 775 S. Fourth St. Public viewing will be from 10 a.m. to noon. A service will follow from noon to 1 p.m.

(This story was updated at 9:20 a.m. Saturday, Aug. 14, to clarify information about the Yuma memorial for Agent Wheeler.)