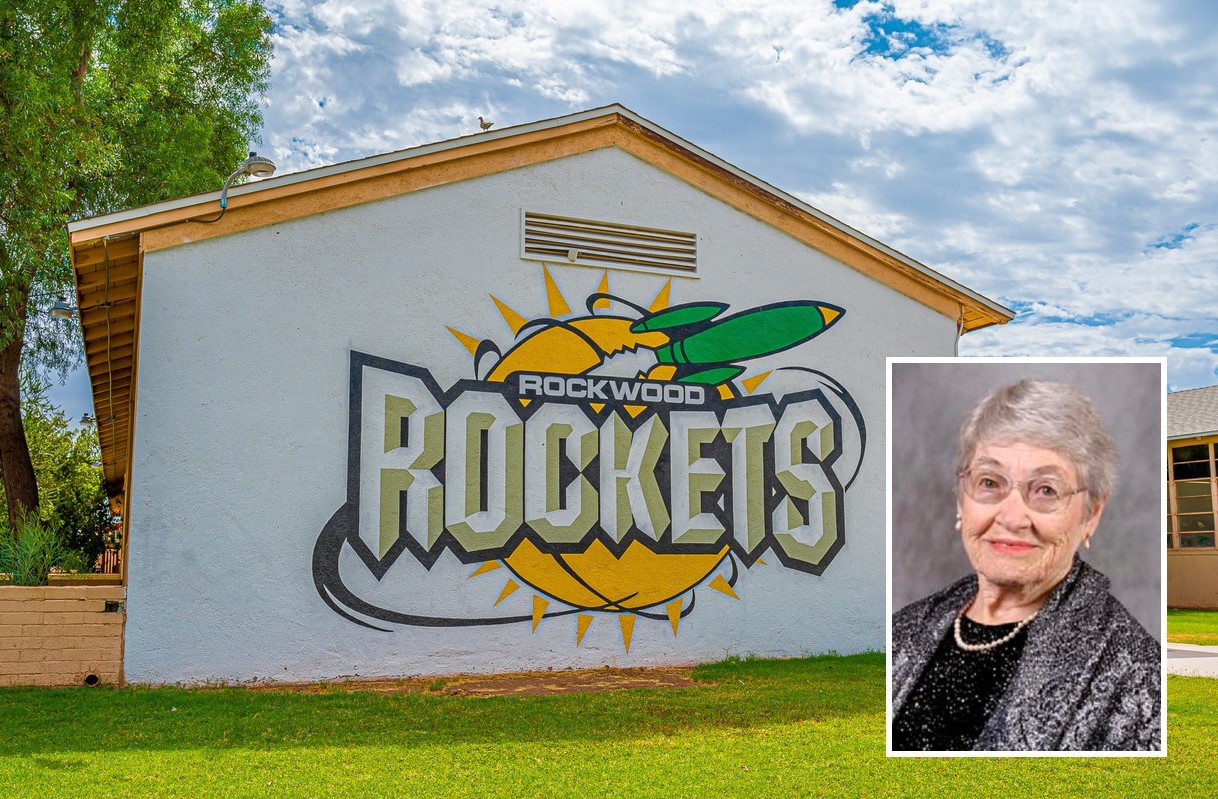 The Rockwood Rockets mural stands brightly on a wall at Rockwood Elementary School in Calexico, where retired schoolteacher Mabel Stenstrom worked from 1964 to 1980. She died at 103 years old. | CAMILO GARCIA JR. AND COURTESY PHOTO
Home
Education
In Education

Mabel Stenstrom Spent Most of Her Career at Rockwood Elementary, 1964 to 1980

CALEXICO — Retired Rockwood Elementary schoolteacher Mabel Stenstrom was a tough cookie: She fought to come into this world, and she fought to stay in it, and along the way, she did things not typically expected of women of her generation.

“It’s not every day that a teacher makes it to 103. To have one who taught in Calexico? We should celebrate her,” said Diana Harvey, a retired Calexico teacher herself and neighbor to Stenstrom. “She was an amazing person with a fascinating life.”

In the early hours of July 22, Calexico unknowingly lost one of the its retired educators, when Stenstrom died in her sleep at the La Vida Real Retirement Residence in El Cajon.

She was born Mabel Frances Reed on Oct 17, 1917, in Tennessee, two months premature. Being born premature in 1917 could have been a death sentence if not for her father, Dr. William Anderson, and the fighting spirit that she kept with her for the rest of her life. Her father converted the family oven into a makeshift incubator, where she spent the first few months of life, according to family.

In 1943, when the United States was plunged into World War II and most women stayed home, Stenstrom instead enlisted in the Navy, performing her boot camp training at Hunter College, New York City.

Her first posting was at Oklahoma A&M University, where she was a mail delivery driver. There, Stenstrom had to overcome another obstacle, family said, the fact that she couldn’t drive. It was very common for young women to not be taught how to drive during the 1940s, according to her son-in-law, Rod Tuttle. She was honorably discharged in 1945.

Stenstrom came to Calexico in 1964 and began teaching third grade at Rockwood Elementary. Tragedy struck Stenstrom shortly after she arrived in Calexico, when her first husband, Ralph Vasquez, died in 1965.

Vasquez was a Panamanian national and U.S. Army veteran who shared Stenstrom’s passion for teaching, and they had moved together to Calexico to pursue their teaching careers.

At age 47, Mabel found herself alone and in a new city with three children: her daughter, Guille, and her twin sons, John and Mike. Many might have given up and gone to be close to family, but Stenstrom chose to stay in the Imperial Valley, continuing to teach at Rockwood Elementary until 1980, when she moved to Jefferson Elementary. Stenstrom spent her last year at Jefferson as a reading specialist, retiring from teaching in 1981.

On Dec. 23, 1968, Mabel married William Stenstrom while still teaching at Rockwood Elementary. Together they ran the A&B Ambulance Service and the A&B Telephone Answering Service, but Mabel Stenstrom did not sacrifice her teaching career. She did both for another 13 years. The Stenstroms remained married until William died in June 1993.

After retirement, Mabel Stenstrom stayed active in the community. She joined the Worthy Matron of The Order of the Eastern Star, the VFW, The MWAN Military Women’s Association, The American Legion 8 & 40, and the California Retired Teachers Association.

Stenstrom also became a member of the Imperial Valley Master Chorale, where she traveled to New York and Europe to perform. In 1995, Stenstrom was selected to serve as honorary grand marshal in the San Diego Veterans Day parade, where she rode in the lead convertible with her son, John.

Stenstrom moved into an independent living apartment at El Cajon, La Vida Real Retirement Residence, in October 2003. There she enjoyed chair yoga, group sing alongs, the memory quiz activities and a weekly scenic drive offered to the residents, family noted. She remained active there until a sudden stroke forced her to to the Memory Care Section of La Vida Real in January 2014.

Stenstrom was preceded in death by her brothers, William Reed and Charles Reed, and her daughter, Guille Tuttle. She is survived by her 100-year-old sister, Betty Woodard, her sons and their wives, John and Yolanda Vasquez and Mike and Hilda Vasquez, son-in-law, Rod Tuttle, seven grandchildren, six great-grandchildren, and three great-great-grandchildren.