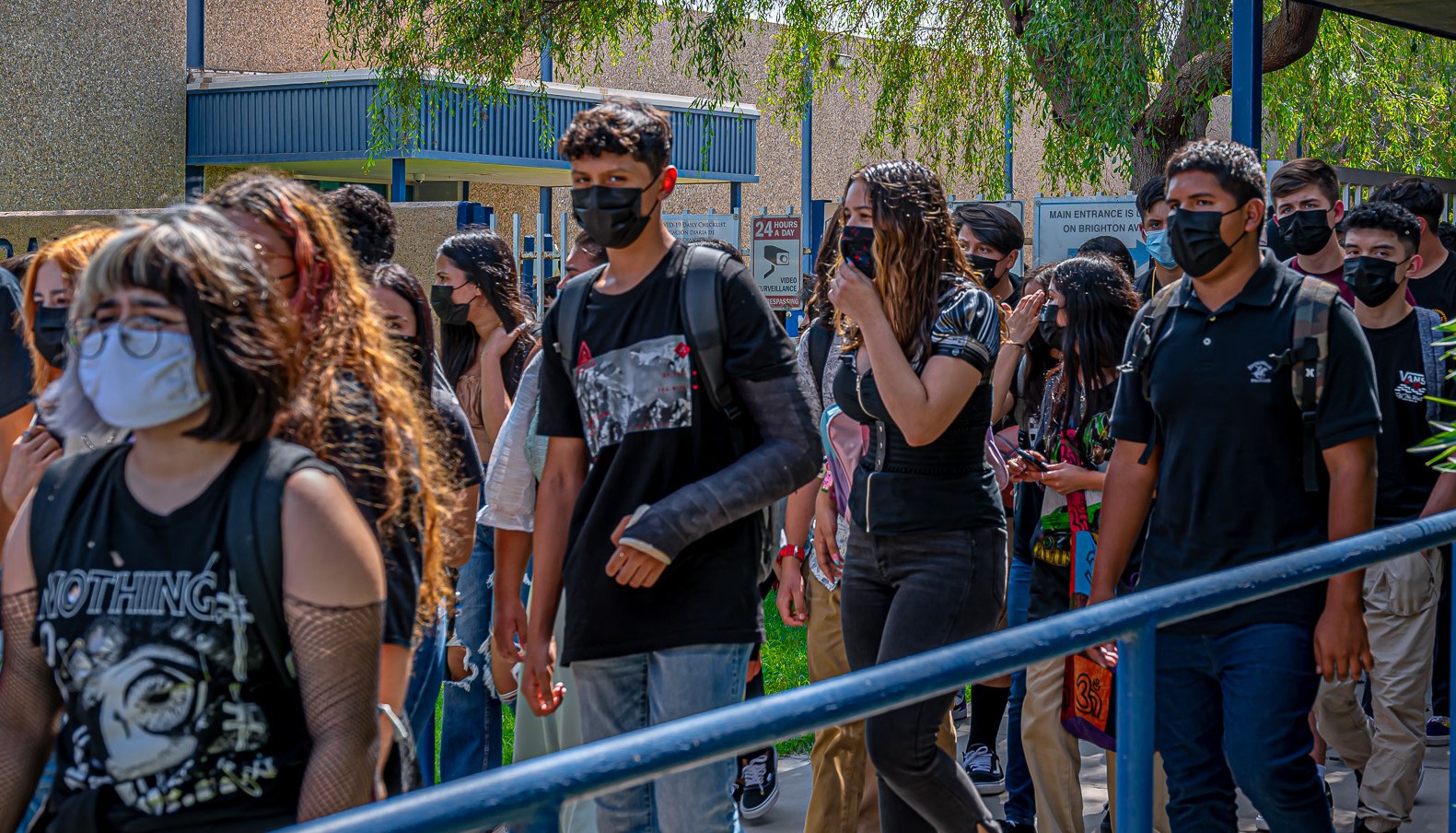 Students at Central Union High School in El Centro don masks as they depart campus on the first day of classes on Monday, Aug. 9. The statewide school mask mandate for students has raised the question by some parents about making choices for their children. | CAMILO GARCIA JR. PHOTO
In COVID-19EducationLocal News

Holtville Unified School District Board Votes, 4-1, to Comply with Mandate … To A Point

State-mandated face coverings are among this year’s back-to-school essentials for K-12 students and have prompted backlash from some Imperial Valley parents who would prefer they remain the ultimate authority about whether their children wear a mask at school.

At the same time, a pair of local doctors have appeared separately before multiple public school districts’ boards to share information about what they perceive to be the ineffectiveness of many COVID-19 restrictions, including having students wear masks indoors to help prevent the potential spread of the coronavirus.

At least one local school board — Holtville Unified School District — has decided it will comply with the state’s mask mandate, but not take any corrective action against students who come to school without wearing a mask.

Yet, whether local or state officials will take any enforcement action against the school districts that may not fully comply with or enforce the mask mandate remains to be seen.

What is clear is the California Department of Public Health’s requirement that all K-12 public and private school students must wear a mask while indoors during the 2021-22 school year. Some medical exemptions to the mask mandate do exist and would require an alternative, such as a face shield with a drape on the bottom edge, if the student’s condition permits it.

When the state Department of Public Health announced the mask mandate on Aug. 2, it also indicated that schools would be required to send home students who refused to wear masks. However, it quickly reversed course and stated that the state’s school districts would have the discretion to determine how they would enforce the mandate.

That is what Holtville Unified School District’s board appears to have done, when it voted 4-1 to adopt a resolution that stated it would comply with the state’s mask mandate but refrain from taking any punitive action against students attending school without masks.

In a letter the district sent to its stakeholders on Friday, Aug. 13, it cited the state’s lack of guidance on the issue of enforcement as a reason for adopting its position.

“Violation of the mask mandate shall not be a basis for punishment of HUSD students (for example, no suspensions, no detentions, no academic retaliations, no expulsions, and no harassment),” the letter stated. “In addition, no HUSD student wearing a mask shall be punished, harassed, or discriminated against.”

The board’s vote came during a special meeting on Thursday, Aug. 12, where a community update and board discussion on its mask policy was listed as its sole agenda item.

In explaining their positions, some board members expressed a distaste for having more government mandates intruding on an individual’s personal liberties, such as deciding whether their child should wear a mask or not.

The sole dissenting vote, board Trustee Jared Garewal, said he was supportive of the mask mandate and its enforcement, without which many students and parents were likely to feel less safe about returning to school.

“My goal is to get as many kids in school as possible,” Garewal said on Friday, Aug. 13. “I want them to feel safe in school. I want them to learn and feel secure.”

Aside from his concerns about students’ health and safety, Garewal also was supportive of the mask mandate and its enforcement for the added protection it could potentially bring the school district.

“We have an obligation to follow the laws of the state,” he said. “By not following the mandate and enforcement, I feel like we open ourselves up to liability if something were to happen.”

For the most part, enforcing the mask mandate falls directly on the individual school districts, said county Health Officer Dr. Stephen Munday during a conference call with media on Thursday.

“When the school mandate was developed, it made it clear that compliance was going to be placed in the hands of the schools and not specifically the Health Department,” Munday said. “We are in most cases not an enforcement agency.”

When it comes to communicable diseases such as COVID-19, the Public Health Department does have the authority to shutter workplace sites or mandate additional safety measures if unsafe workplace conditions arise, Munday said.

Additionally, the California Division of Occupational Safety and Health (Cal/OSHA) has similar authority to ensure compliance with the mask mandate. Any enforcement action the agency could potentially take would likely stem from an investigation of a complaint or notifications of serious injuries and illnesses, a state Department of Industrial Relations spokesperson said.

The county Public Health Department does provide some oversight and guidance as it relates to all state and local health orders and has reminded local school districts of their obligations under those health orders.

Imperial Unified School District Superintendent Brian Thomason said the district will comply with the mask mandate largely because of its obligations to the health orders issued at the local and state level.

The district also intends to enforce the mandate. The only students who will not be required to wear a mask are those with a valid doctor’s note for exemption. Students with approved exemptions must wear a face shield with a drape. The other option is for the student to enroll in the district’s independent study program.

“By not complying, the District would have potential liability in an outbreak situation,” he said in an email on Aug. 12.

Brawley Elementary School District Superintendent Richard Rundhaug expressed a similar sentiment about one of the district’s reasons for complying with the mask mandate.

Except for recess, BESD students will be required to wear masks at all times while indoors. The Brawley Union High School District and Imperial County Office of Education also will comply with the mask mandate and follow CDPH guidelines as they relate to applicable exemptions for students.

Responses from a few other local school districts regarding their potential compliance with the mask mandate were pending at publication.

Retired McCabe Elementary School teacher Angela Nelson said she has been encouraging and helping prepare community members to speak to their respective school boards about their opposition to the mask mandate.

Nelson, who opposes the mask mandate, has also spoken before the county Board of Supervisors, written letters to school board members in El Centro, the California Department of Public Health, and local media, “which received a lot of horrible comments.”

“My concerns with this mandate, which is not a law, are that government is reaching too far into our personal medical lives with these demands,” Nelson said in a social media message on Thursday. “Parents should have a choice whether they send their child to school with a mask or not.”

Of particular concern for Nelson is her grandchildren, one of whom is a vaccinated high school senior and therefore shouldn’t have to wear a mask at school, as well as a kindergartner who is entering a dual-language immersion program and will likely encounter challenges because both teacher and student are wearing masks.

In recent days, both local doctors Brian Tyson and George Fareed have been making the rounds at local school district board meetings to provide information about COVID-19, the use of masks and children’s naturally robust immune systems.

A day after he spoke in opposition to the mask mandate at the Brawley Union district’s board meeting, Tyson appeared at Holtville Unified’s board meeting of Aug. 12 to speak out against what he perceives will be another in a long line of failed COVID-19 public health policies.

A better approach would have been to allow children to live a normal life, go back to school and fight the coronavirus with their immune system to help the wider community attain herd immunity.

“I still believe that is the route that we need to go,” Tyson said on the morning of Aug. 12.

He had also argued before the districts’ boards that young children were not disciplined enough to wear and use a mask properly without constantly touching their mouths and noses.

Most of all, he used his remarks before the boards to share information that he said suggests masks are essentially ineffective against preventing the spread of a respiratory disease such as COVID-19, a virus whose size can permeate even the most effective N-95 masks.

“We’ve been listening to the public policies for almost 18 months, and they are not working,” Tyson said.

His practice, All Valley Urgent Care in El Centro, has also seen increased demand from parents for medical exemptions to the schools’ mask mandate.

“I think that people don’t agree with mandates that aren’t backed by science,” Tyson said.

For its part, the California Department of Public Health announced on Aug. 2 that it does consider its latest guidance to be based on sound science.

“Masks are one of the most effective and simplest safety mitigation layers to prevent in-school transmission of COVID-19 infections and to support full time in-person instruction in K-12 schools,” the CDPH website stated. “SARS-CoV-2, the virus that causes COVID-19, is transmitted primarily by aerosols (airborne transmission), and less frequently by droplets. Physical distancing is generally used to reduce only droplet transmission, whereas masks are one of the most effective measures for source control of both aerosols and droplets. Therefore, masks best promote both safety and in-person learning by reducing the need for physical distancing.”

Local Health Officer Dr. Munday explained recently that he included the use of facial coverings in his health orders early in the pandemic before the science was more conclusive on their efficacy. Since that time, Munday told the Imperial County Board of Supervisors on Tuesday, Aug. 10, numerous scientific reports have backed their effectiveness.

Yet even in the absence of certainty, a mask is a layer of protection in a system of layers he compared to “Swiss cheese.”

“One of the analogies that we’ve been using a lot in this public health response is the Swiss cheese approach,” he told the county board. “As you know, Swiss cheese has holes in it. But if you layer multiple layers … the holes are covered up by the additional layers.

“Anybody who can be vaccinated, we want them to be vaccinated,” Munday added. “We want to create a ring around those children and others who cannot get vaccinated.”

(This story was updated at 9 a.m. Saturday, Aug. 14, to correctly identify Jared Garewal as a Holtville Unified board trustee)

Next
GUEST COLUMN: The Price of Unpreparedness