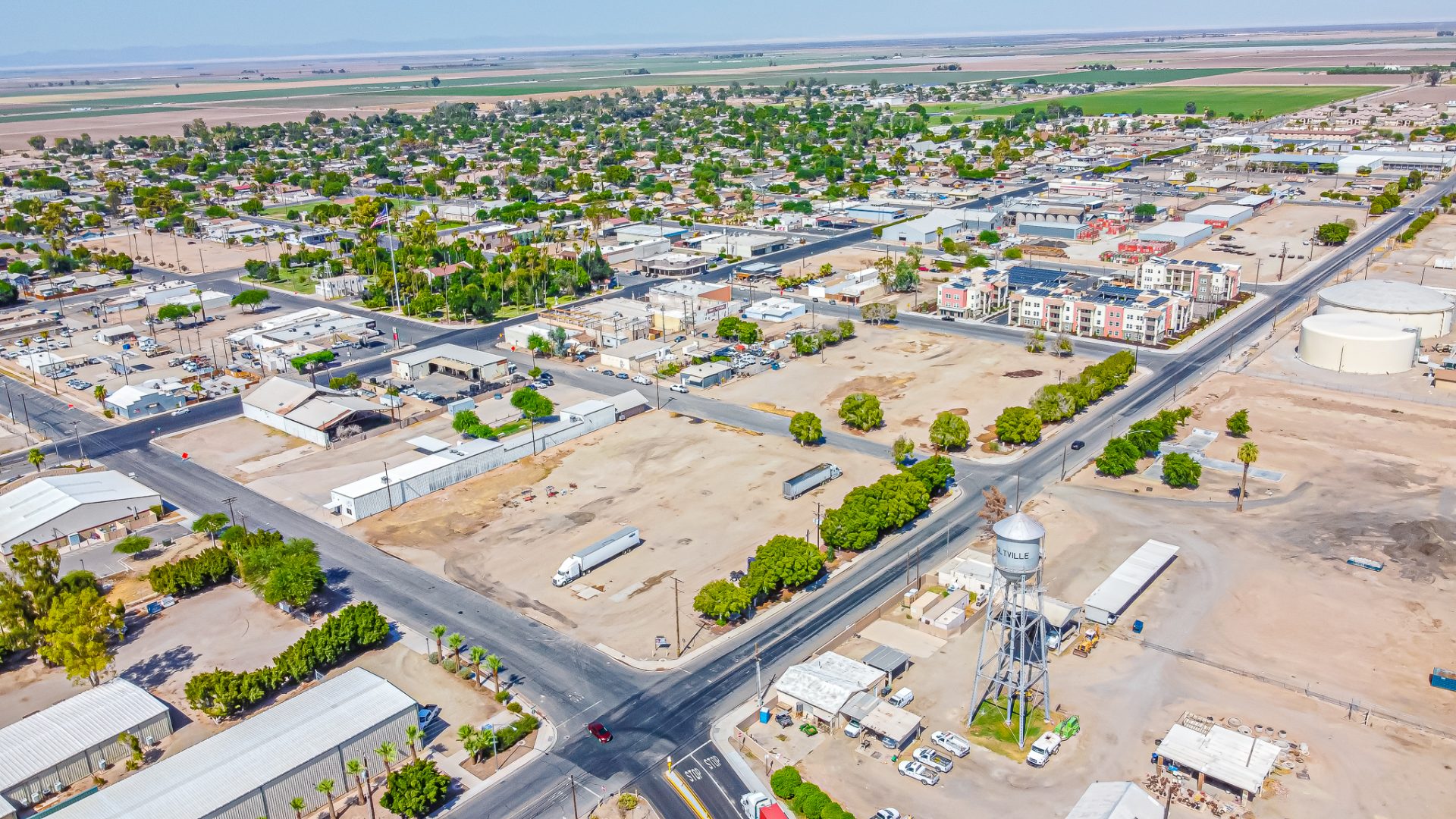 Holtville can be seen from an aerial view facing northeast. The city declined in population over the past decade, according to the 2020 Census, which one Holtville City Council member believes is accurate and due to COVID affecting the count. | CAMILO GARCIA JR. PHOTO
In COVID-19Featured StoriesRegional News

2020 Census Shows Imperial County Grew, But in Smaller Numbers Than Anticipated, According to Data Released Aug. 12

Count Imperial County fortunate in that it bucked a decade-long national trend in which more than half of America’s rural counties lost residents to the country’s major population centers, but don’t expect local officials to cheer that fact.

Although the county showed population growth of just over 5,000 people from the 2010 Census to the 2020 Census, local policymakers and data wonks are expressing surprise — even shock — at how little the Imperial Valley grew, especially communities like Calexico, where some were certain the population would have climbed well into the 40,000s.

Imperial County’s population grew from 174,528 in 2010 to 179,702 in 2020, a nearly 3 percent increase, according to the 2020 Census Redistricting Data Summary File, which provided the first look at populations for small areas and includes information on Hispanic origin, racial demographics, information for individuals 18 and over, and housing occupancy, among other data streams.

The numbers represent where people were living as of April 1, 2020, about a month into a worldwide pandemic where much of the United States was on some level of lockdown and just learning to cope with COVID-19, the suspected and obvious culprit in an unremarkable national count.

“Many counties within metro areas saw growth, especially those in the South and West. However, as we’ve been seeing in our annual population estimates, our nation is growing slower than it used to,” said Marc Perry, a senior demographer at the Census Bureau. “This decline is evident at the local level where around 52 percent of the counties in the United States saw their 2020 Census populations decrease from their 2010 Census populations.”

Imperial County also solidified its standing in the United States as the county with the highest Hispanic population, reaching 85.2 percent in 2020, up from 80.3 percent in 2010.

Calexico City Council member Raul Ureña, who has been a big proponent in data-driven decision-making, expressed similar surprise as Chairman Kelley. Since taking office in late 2020, he has said at City Council meetings that he was looking forward to the population release, envisioning Imperial County numbers in the mid-180,000 range.

“We may have had an illusion when young people came back home (from college) for the pandemic,” Ureña said on Friday. “Imperial County, at this point, is not the hot spot for growth in Southern California in the way it might have been just a couple of years ago.”

Other Imperial County officials expressed similar reactions, even in the face of growth.

The city of Imperial has been experiencing a consistent and prolonged growth spurt over two decades, as it positioned itself as the Valley’s bedroom community with the development of tract homes and subdivisions along the Aten Road corridor and other areas of sprawl in all directions, yet it’s county-topping 37 percent population growth in the decennial census somehow seems anti-climactic.

“I do think COVID had a big impact on how many people made time to fill out the Census as a priority. So, I do think those numbers are probably inaccurate to some extent,” Imperial Mayor Karin Eugenio said Friday.

And smaller local communities lost residents in much larger numbers than were to be expected. Holtville lost nearly 6 percent of its population, according to the new data, and one council member finds that suspect.

“I’m not sure how accurate the Census numbers are going to be considering the end of the counting was occurring at the same time as COVID was in full outbreak,” Holtville council member Murray Anderson said. “I know the Census count was being done online and in-person, but again, with COVID in full swing. how true are those numbers?

“No way the population went down,” he added. “People just didn’t respond to the online census or open the door when they went knocking. … Holtville had the second-highest response rate in the Imperial Valley from what we were told as a council from the Census people. I think Imperial was on top and Holtville was second.”

In a year when COVID affected so many aspects of the American experience, the 2020 Census was an obvious casualty, as the local count was beset with problems from the start.

The person-to-person assistance required for an older and sometimes Spanish-speaking-only population in already “hard-to-count” census tracts, or neighborhoods, was jettisoned as social distancing mandates put in effect in March 2020 closed many of the planned computer kiosks around the county for the debut of an online tally, and door-to-door canvassing was limited.

Calexico Mayor Javier Moreno saw it coming. He said his 2020 election campaign was a clear indication of the public’s unwillingness to opens its doors to the potential spread of COVID.

“People were getting scared; people were not coming out. When I was campaigning, there was a lot of misinformation out there and uncertainty, (we were) not knocking on doors,” Moreno said Friday. “I think (COVID) totally reinvented everything that we do. The sick got sicker, and the poor got poorer.

“That is crazy,” Moreno said of Calexico’s census numbers. “Where is the gap, where are the people?”

The California Department of Finance projections for Calexico for Jan. 1, 2021, were 40,485, almost 5 percent off the federal tally.

For all Imperial County, the state’s projections, which have largely been seen as accurate over the years, were vastly different. The Department of Finance estimated Imperial County’s population on Jan. 1, 2020, to be 188,422, which fell by 1.3 percent with the 2021 projections of 186,034.

In any case, the state’s estimate is off the federal count by 3.4 percent.

COVID and Other Factors

The person charged with coordinating 2020 Census activities in Imperial County thinks COVID is just part of a larger difficulty with dialing in on the county’s population figures.

Imperial County Deputy County Executive Officer Esperanza Colio said there were three factors that contributed to people’s resistance to respond to the Census.

“At the beginning of the census campaign, several discussions happened about the inclusion of the citizen(ship) question which frightened some of the residents, not just in Imperial County but nationwide,” Colio wrote in an email on Saturday, Aug. 14.

“Even though the question was not included in the final census survey, the damage was already done,” she wrote. “Some people lost trust in the process and did not participate.”

The Census 2020 was also the first attempt to count people online, she added. There are still many families and residents with no internet service or a lack of understanding on how to use computers and the web.

Lastly, the count came during the pandemic.

“More people obtained COVID-19 information online and through the media, (but) the pandemic took priority in people’s lives,” she wrote. “People were getting sick while others were dying, the Census was not among people’s priorities. Besides, not many people have a full understanding of the importance of the Census.”

As Thursday’s data release shows by title of the info alone — 2020 Census Redistricting Data Summary File — the decennial count is a factor in both redistricting, or establishing the number of government representatives for regions, and the availability of federal and state funding formulas for all levels of government.

For every person left uncounted some $2,000 a year in federal funding is lost, , according to U.S. Census Bureau officials.

The 2020 Census will determine how more than $800 billion in federal resources will be distributed each year for the next decade to state and local communities, according to the bureau.

County board Chairman Kelley said he’d hoped for a higher population count so the county and cities would get more federal and state funding.

“We’ll still live the same way we have been living, just hanging on,” he said, expressing disappointment.

While the new numbers may affect the county in terms of funding allocations, other factors account to secure funding as well, according to Colio. Those factors include median income and unemployment, which the Census Bureau is still using older data to account for at the moment.

When asked if there was a way to dispute the results because it was a pandemic year, Colio said she didn’t know if it was possible. It would be upon those in high positions to challenge the results.

Colio expressed that the outcome of the Census 2020 count should not reflect the outreach efforts of the local partners involved in the campaign to get people counted. She said the partner did great work under difficult circumstances.

“Our partners worked afternoons, evenings and weekends during the campaign. They suffered the harsh weather in Imperial County without complaining. I am truly grateful for having the opportunity to work along with them during the Census 2020 campaign,” Colio said of the coalition of “state, cities, non-profit organizations, special groups, elective officials, and the county” that undertook the count campaign.

She added that Imperial County’s “self-response rate” increased to 62.5 percent for the 2020 Census count over the rate for Census 2010, which was 58.5 percent. The self-response rate is just that, it was the process to encourage citizens to self-respond rather than have to be followed up door-to-door.

“Because of COVID, and the inability to talk directly to the residents, many of the campaign activities were designed to encourage residents in Imperial County to self-respond to the Census,” Colio added.

More on the Numbers

The physical makeup of Imperial County encountered a larger shift than the population alone.

Calexico council member Ureña is part of a group in Imperial County assessing the flight of the Black community from the Valley over the last half century, and he believes that same lens can be applied to other demographics.

“I will look into the demographic data to try to find some insight as to exactly which populations are moving in and out. Obviously in the context of working with the African American Needs Assessment, we’re at least trying to dive a little bit deeper into why a certain demographic has left Valley over 50 years,” he said.

Next
LGBT Center ‘Pools’ its Resources for Services Fair