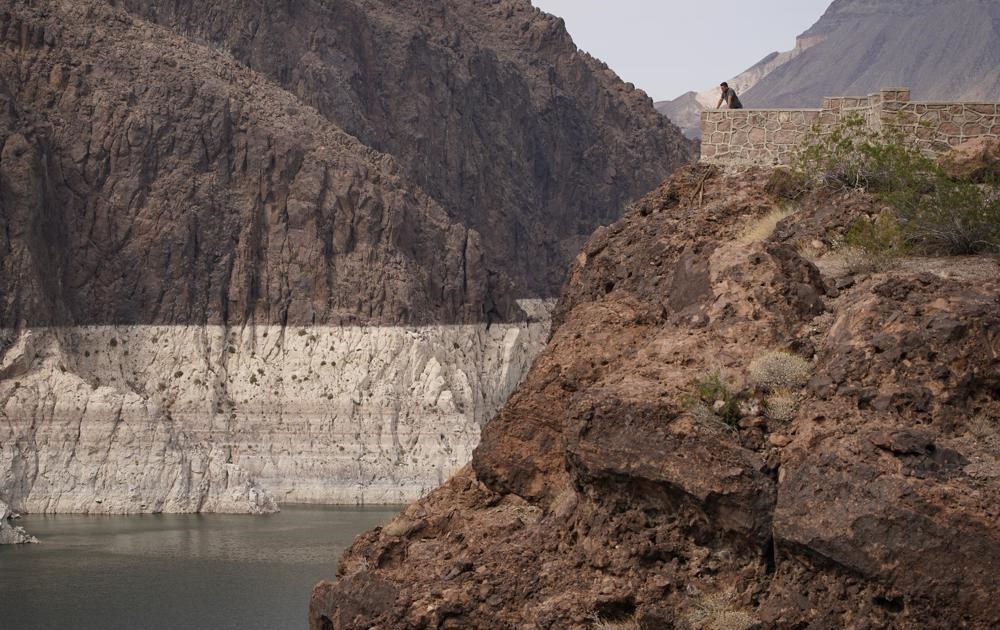 A person looks out over Lake Mead near Hoover Dam at the Lake Mead National Recreation Area, Friday, Aug. 13, in Arizona. The bathtub ring of light minerals shows the high watermark of the reservoir which has fallen to record lows. | AP PHOTO/JOHN LOCHER
Home
Agriculture
In AgricultureRegional News

U.S. Bureau of Reclamation officials declared the first-ever water shortage on the Colorado River on Monday, Aug. 16, and the Imperial Irrigation District weighed in on Tuesday, Aug. 17.

That declaration has triggered cuts in water supplies to some Arizona farmers and areas of Nevada for 2022.

In the U.S., Arizona will be hit the hardest and lose 18 percent of its share from the Colorado River next year, according to the Associated Press.

That’s around 8 percent of the state’s total water use. Nevada will lose about 7 percent of its allocation, or 21,000 acre-feet of water.

California is spared from immediate cuts because it has more senior water rights than Arizona and Nevada. Mexico will see a reduction of roughly 5 percent, or 80,000 acre-feet.

The Imperial Irrigation District has addressed the cuts, though the district won’t yet be affected by the recently announced shortage reduction.

“The Imperial Irrigation District is actively monitoring the ongoing drought conditions and forecasted reservoir elevations as the district looks to protect the Imperial Valley’s sole water supply,” IID board President Jim Hanks said. “IID supports a collaborative approach to river management and renewed efforts of the Basin States to ensure the long-term reliability of the Colorado River system; however, the district will protect and defend the senior water rights that form the foundation of our rural community.

“The district will continue to work with its growers and Southern California water conservation partners to ensure the efficient management of all Colorado River resources, and anticipates additional discussions with federal and Basin State representatives to further opportunities to protect critical system elevations,” he continued. “As a long-standing advocate for the expansion of water storage opportunities in Lake Mead, IID looks forward to identifying additional water conservation or reuse opportunities, including those within IID’s service area while fully protecting public health and wildlife at the Salton Sea.

“Since late 2003, IID has generated over 6.2 million acre-feet of conserved water for transfer or storage to further water supply resiliency in both California and the Lower Basin,” Hanks added. “IID’s ongoing implementation of the Quantification Settlement Agreement, the nation’s largest agriculture-to-urban water conservation and transfer program, will generate nearly 500,000 acre-feet of additional conservation in 2021.”

The 2022 cuts are triggered when predicted water levels fall below a certain threshold, according to the Associated Press. Hydrologists have predicted that by January, Lake Mead will drop to 1,066 feet above sea level, below the 1,075-foot threshold.

More cuts are triggered when projected levels fall to 1,050, 1,045 and 1,025 feet above sea level. Eventually, the Associated Press reported, some city and industrial water users could be affected.

Previous
Rising ECA Could Have Been Worse, IID Officials Say

Next
Those Against Holtville Mask Decision Sound Off