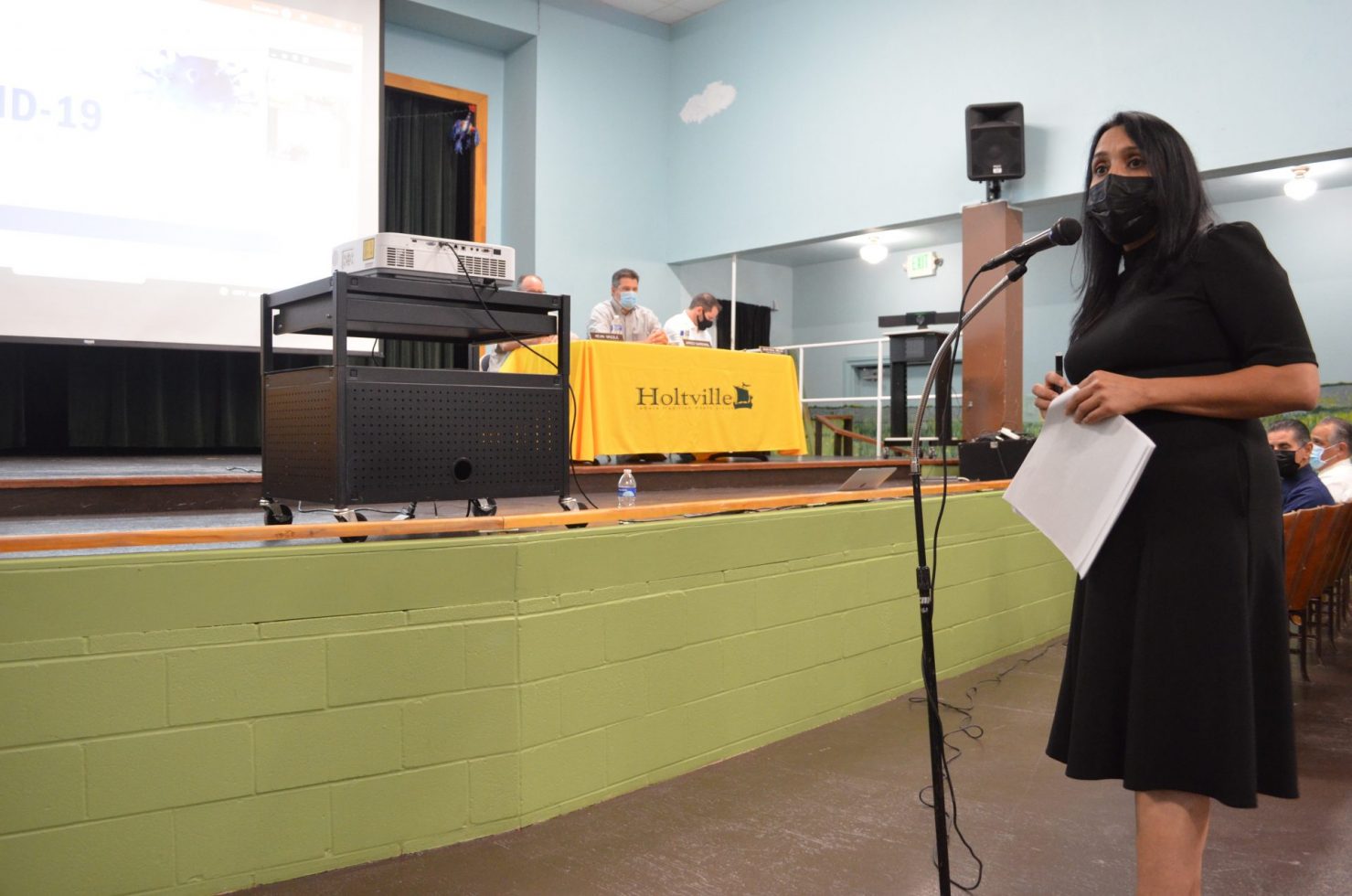 Issue Set for a Fourth Meeting — and Possible Action — on Thursday, Aug. 19

HOLTVILLE — It’s anybody’s guess what action, if any, the Holtville Unified School District board may take in regard to the statewide mandate requiring K-12 students wear masks while indoors at campuses.

Previously, the board appeared to have settled the matter on Aug. 12, when it voted 4-1 to comply with the statewide mandate but directed the district to refrain from taking any punitive action against students who attend school without a mask.

In doing so, the district cited the state’s lack of guidance on the issue of enforcement as a reason for adopting its position.

“Violation of the mask mandate shall not be a basis for punishment of HUSD students (for example, no suspensions, no detentions, no academic retaliations, no expulsions, and no harassment),” the district announced in letter dated Aug. 13. “In addition, no HUSD student wearing a mask shall be punished, harassed, or discriminated against.”

But since then, the board has convened one regular meeting and a special meeting where the mask mandate and the board’s decision dominated the agenda and the meetings’ public comment sessions, where community members spoke both for and against the mandate’s enforcement.

And while two of those past three meetings’ agendas did not include any opportunity for the board to take action, the sole item on the agenda for a fourth meeting scheduled for Thursday, Aug. 19 contained wording similar to the Aug. 12 meeting where the board did take action and ultimately directed the district to not fully enforce the mandate.

Yet the board is willing to comply with COVID-related mandates, as was evident during its Aug. 18 special meeting, when all of the members present appeared with face coverings. Their mask-wearing came a day after the county health officer issued a health order requiring the use of masks at all indoor public settings.

Their actions were a departure from the Aug. 16 meeting where the only board member to wear a mask, Jared Garewal, was also the only one who voted against the resolution that directed the district to not enforce the mask mandate.

Should the HUSD board hold fast to its previous resolution, it would remain the sole large local public school district to choose not to enforce the statewide mandate at its campuses.

Its decision to not enforce the mask mandate could also potentially place the district in legal jeopardy.

Holtville resident and past HUSD board candidate Summer Heraz, who spoke during the Aug. 18 special meeting and who identified herself as a local school administrator, said her district’s legal counsel had provided information to that effect.

“Each of our individual board members have legal exposure for not following the mask mandate,” Heraz said.

She also expressed sympathy for the HUSD board, which has increasingly found itself addressing a controversial topic instead of focusing on more important matters.

“We’re so consumed with this issue that we don’t have control over that it’s really having a negative impact on our board members and administrators, our students and our teachers,” Heraz said.

Should the HUSD board decide to enforce the mask mandate, that action would likely not sit well with a pair of community members who spoke on Aug. 18 in favor of having the district grant parents the discretion to decide whether they want their child to wear a mask or not.

In the estimation of resident John Hawk, parents of healthy children from healthy households should have the opportunity to choose what practice is best for their children.

“Let the parents choose,” Hawk said. “Don’t be goaded and railroaded into something that you don’t want to do.”

Similarly, resident Mykell Johnston spoke in favor of the district allowing parents the right to choose.

“I am not against the mask mandate at all. I’m for pro-choice,” Johnston said. “If you want your child to wear a mask and you feel a mask works, then put it on your child and send them to school. If you don’t, then I think there should be a choice.”

Johnston’s remarks followed a lengthy presentation by county Public Health Department Director Janette Angulo, who provided information related to the state and county’s legally binding COVID-related health orders, and the latest data related to the coronavirus’ impact in the Valley and surrounding region.

As up-to-date and data-driven as Angulo’s half-hour presentation was, Johnston, a Holtville Unified School District nurse and local intensive-care unit neonatal nurse, nonetheless encouraged those present to do their own research.

She also took issue with Angulo’s citation of the Valley’s 745 COVID-related deaths, which omitted any mention of how many of those may have had pre-existing conditions, such as diabetes, obesity, and heart disease, all of which are prevalent in the county and among the highest rates in the state.

“They want you to see these alarming numbers to scare you,” Johnston said as she directly faced those gathered in the Finley Elementary School auditorium for the special meeting.

By her calculations, those 745 deaths, as well as the deaths reported among school age children, amounted to just 0.004 and 0.003, respectively, of the county’s population of about 181,000.

She also went on to question the efficacy that masks have against the spread of COVID-19 infection, likening the masks’ efficacy to “throwing sand at a chain-link fence.”

Though HUSD Trustee Matt Hester had advised the public at the start of the meeting that the public comment session would be limited to 20 minutes and speakers to three minutes, Johnston was allowed to speak for about 10 minutes, after other audience members ceded their three minutes to her.

It wasn’t immediately clear if Johnston was referring to the article, “Experimental Assessment of Carbon Dioxide Content in Inhaled Air With or Without Face Masks in Healthy Children: A Randomized Clinical Trial,” by Harald Walach, Ph.D., published online in Journal of American Medical Association Pediatrics on June 30.

That article was retracted on July 16 by the same journal over concerns regarding the study methodology.

Johnston also she questioned why the current response to COVID-19 exceeded any measures taken in response to influenza, which she contended had proven deadlier.

“More children died of influenza in 2019 than COVID in 2020 and we have never ever masked for influenza all these years,” she said.

During her presentation, Public Health Director Angulo said that both the state and the county’s health orders requiring masks are the result of rising COVID-19 cases, hospitalizations, and deaths. Similarly increasing rates in neighboring San Diego and Riverside counties have only added to local public health officials concerns, she said.

Increased reports of the Delta variant, which is twice as infectious as the initial coronavirus strain, have also given local officials cause for concern. Two Delta variant cases were reported less than a month ago. As of Monday, Aug. 16, that figure stood at 46.

“We are anticipating that many cases will be found in the next few weeks,” Angulo said.

While acknowledging that masks’ efficacy against the spread of COVID-19 may have yet to be proven scientifically, Angulo asserted that much has been learned since the onset of the pandemic. Studies have shown that when masks are worn universally, transmission rates can be cut down by as much as 70 percent, she said.

As for masks’ impact on an individual’s carbon dioxide levels, Angulo cited a Centers for Disease Control and Prevention study that determined that CO2 levels are not raised significantly because masks do not form an airtight seal around one’s face.

Locally, some comfort has arisen in response to the county’s 88 percent vaccination rate, which reflects the percentage of residents who have received at least one shot of the vaccine, and which is one of the highest in the state.

That rate, combined with other precautionary measures and intervention strategies, is the likely reason why the county is not experiencing the steep spikes in positivity and new case rates as in neighboring counties, Angulo said.