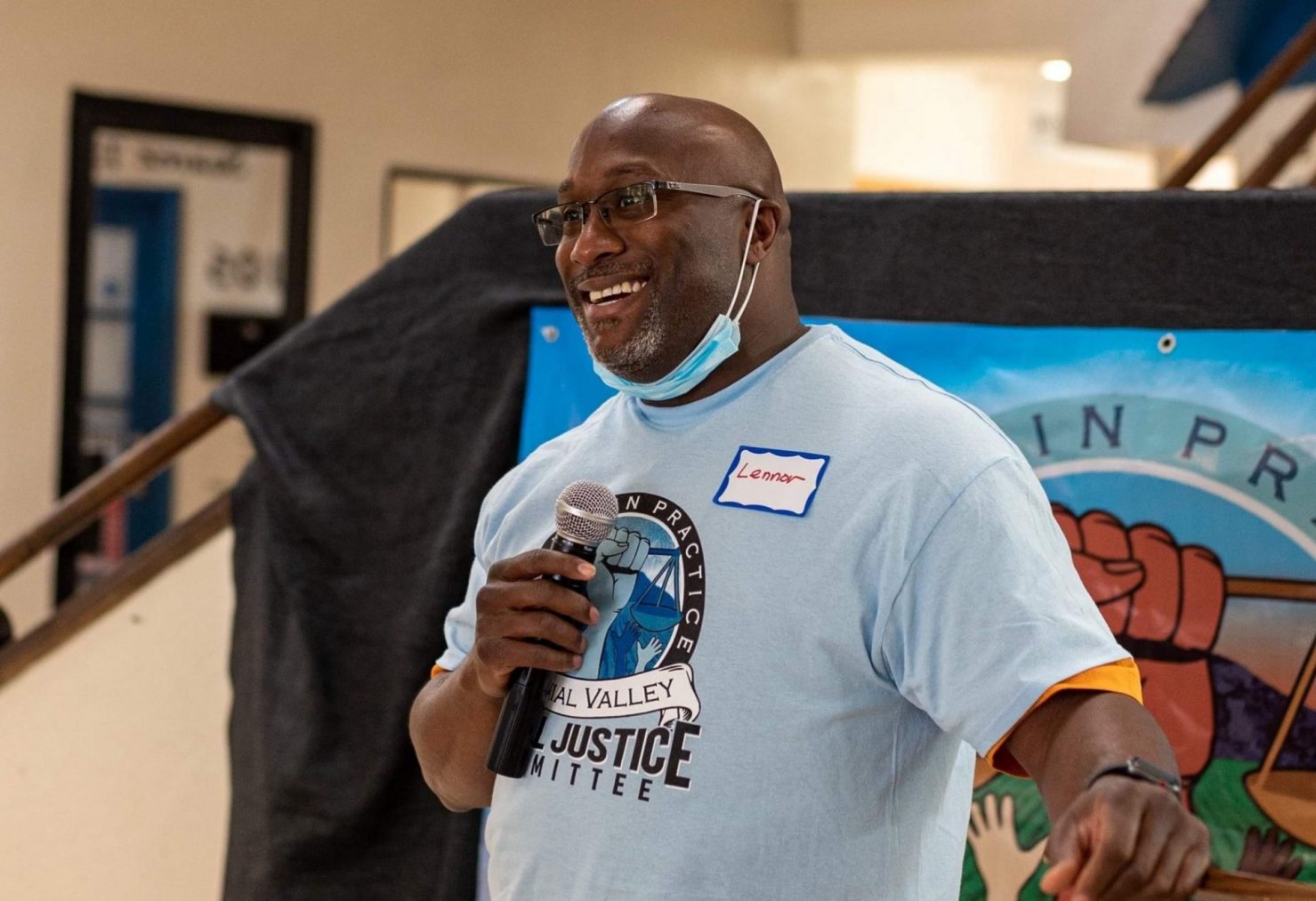 Dr. Lennor Johnson, vice president of student services and equity at Imperial Valley College and a member of the Imperial Valley Social Justice Committee, speaks at the dedication for the committee’s new office in downtown El Centro on May 15. Johnson was appointed as interim president/superintendent by the Imperial Community College District Board of Trustees on Wednesday night, Aug. 18. | PAUL VALDIVIA PHOTO
Home
Education
In EducationRegional News

IMPERIAL — Dr. Lennor M. Johnson will serve as the interim superintendent/president for Imperial Valley College, after the college’s vice president of student services and equity was appointed to the position on Wednesday, Aug. 18.

Johnson’s experience in higher education spans over 24 years, and he has dedicated his career to helping students achieve their educational goals and closing equity gaps, according to an IVC press release issued on Thursday, Aug. 19.

He was appointed by the Imperial Community College District Board of Trustees during its meeting Wednesday evening.

“I am optimistic about this upcoming academic year and believe Dr. Martha Garcia has built a solid foundation and I intend to build on it. My hopes and vision is to bring staff, faculty and students back on campus safely, eliminate barriers to students’ success, expand and strengthen community partnerships and increase enrollment,” Johnson stated in the press release.

“IVC has amazing faculty, staff and administrators who are all committed to students’ and the community’s success, which makes all things possible. I am extremely excited and humbled by this opportunity and would like to thank the board of trustees for this opportunity to continue to serve our students and community,” he added.

Since coming to IVC as dean of student services in 2016, Johnson has played an integral role in the growth and development of the prison program, dual enrollment, the food pantry, student housing, and other programs designed to address the unique needs of students who are considered foster youths, disabled, formerly incarcerated, homeless, and other disproportionately impacted populations.

Johnson has successfully secured millions of dollars in grant funding to expand services for IVC students, according to the college.

“Dr. Johnson demonstrates an unwavering commitment to helping underserved students overcome barriers to achieve their academic and career goals, something that is evident throughout his professional career,” said IVC Trustee and Board President, Father Mark Edney. “We are delighted to continue the work of serving our students with Dr. Johnson leading the college.”

Before joining IVC, Johnson served in several leadership capacities within the higher education sector, including campus director, dean, graduate curriculum chair, professor, director of community relations, and academic adviser. As campus director at Bryant & Stratton College, he served as the chief executive officer over two campuses (Bayshore & Milwaukee). As dean at Robert Morris University, he provided leadership in successfully repositioning the university to increase access of first-generation, veterans, athletes, out-of-state and international students. He also assisted the university in increasing full-time enrollment from 3,800 to 7,800 within five years. As a chair and professor, he researched, developed, and taught several undergraduate and graduate-level courses in the areas of business, change leadership, marketing and education.

Johnson is an active member in the community where he currently serves as a member of the Imperial Rotary Club, and a participant in the Imperial Valley Social Justice Committee, where he advocates for education reform and economic development, particularly for minoritized communities. He was a founding board member of Elevation Foundation, a non-profit organization designed to help at-risk youths obtain the education, skills, employment and community connections necessary to lead successful lives. Throughout his career, he has mentored countless individuals to help them grow and develop into productive citizens.