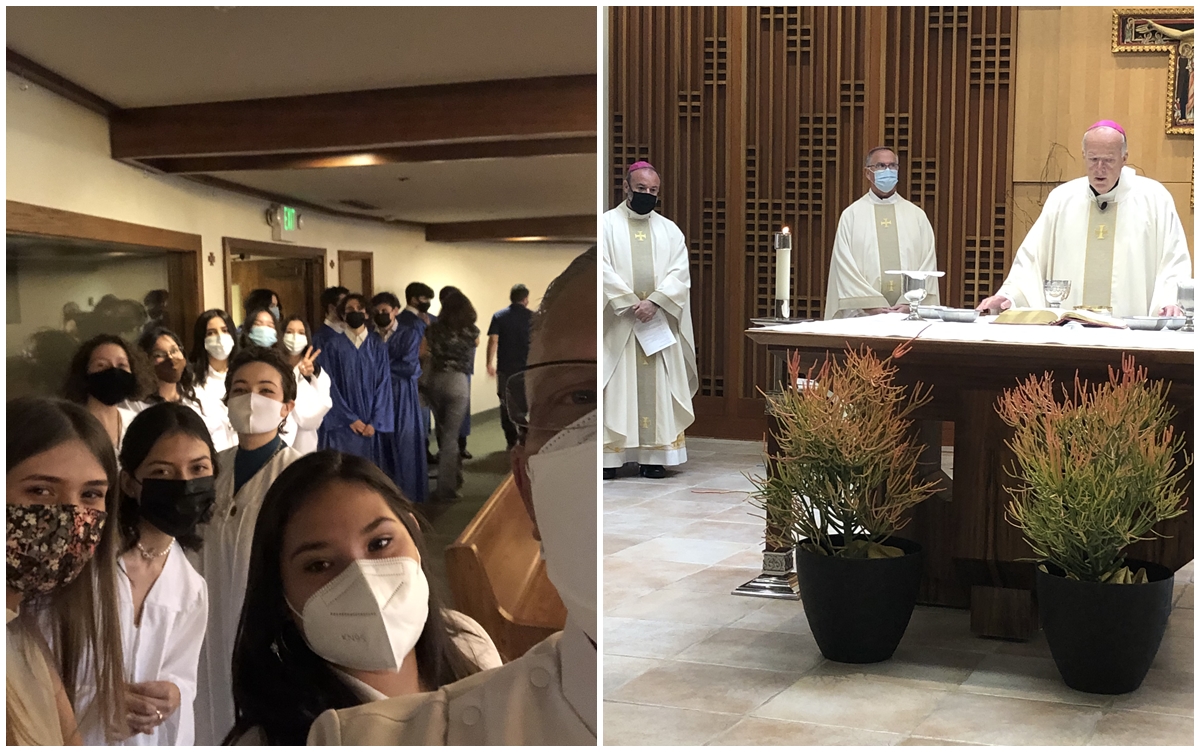 Father Mark Edney (left photo, right of frame) takes a selfie with the St. Mary’s Catholic School Class of 2020 during its graduation Mass that was delayed for a year on June 8 in St. Mary’s Catholic Church in El Centro. Auxiliary Bishop Ramon Bejarano (right photo, from left), Auxiliary Bishop John Dolan, and Bishop Robert McElroy of the San Diego Diocese, which includes the Imperial Valley, deliver Mass at Good Shepherd Catholic Church in San Diego. This week’s indoor mask order for Imperial County was nothing new or sudden for local Catholic Churches. The San Diego Diocese recommended a return to masks three weeks ago, and Edney said “99.9 percent” of the flock had been complying. | PHOTOS COURTESY OF FATHER MARK EDNEY
Home
COVID-19
In COVID-19Regional News

EL CENTRO — Even before the latest county health order requiring the use of face coverings at all indoor public settings, El Centro Catholic had already been recommending that its congregation use masks while attending its parishes.

The congregation’s decision to do so had come about three weeks ago in response to the widespread increase in COVID-19 cases. It also came from a higher authority — the bishop of the Catholic Diocese of San Diego.

So, when the county Public Health Department announced that masks would be required at indoor public settings, venues, gatherings, and workplaces regardless of one’s vaccine status starting Wednesday, Aug. 18, El Centro Catholic went about its business as usual.

“It didn’t come as a surprise to us,” said Father Mark Edney, regarding the latest mask mandate, on Aug. 18.

Indeed, about 99.9 percent of the congregation’s recent church attendees were already voluntarily wearing masks, as well as social distancing.

“People are deliberately not bunching up,” Edney said.

The countywide health order was issued by county Health Officer Dr. Stephen Munday on Aug. 17 in response to rising local, statewide, and national COVID-19 cases, hospitalizations, and deaths due to the Delta variant.

“The goal of the order is to protect our community and local healthcare system from a major resurgence of COVID-19 cases and to allow businesses and services in Imperial County to remain open,” the Public Health Department said in a written statement announcing the new health order.

Locally, the county was reporting a seven-day average of 12.3 cases per 100,000 county residents, an increase from 9.5 reported last week, the Public Health Department stated on Tuesday, Aug. 17.

Additionally, 24 more cases of the Delta variant have been reported locally in the last week, bringing the total to 46 in Imperial County. Similar increases have been noted in neighboring San Diego and Riverside counties, the Public Health Department reported.

“The continued rise in cases is of utmost concern, particularly in our neighboring counties who help support our local healthcare system,” Munday said in Public Health’s announcement.

Despite the rising figures and the county’s latest health order, the First Church of Holtville will continue to allow its dozen or so members to choose whether they want to wear a mask indoors, as it has since the church’s founding in March.

Part of its reason for choosing not to enforce the current and previous mask mandates is because of face coverings’ limited effectiveness as well as the congregation’s fatigue with the constant and shifting mandates, said church administrator Dina Patzloff.

“We still are careful,” Patzloff said on Wednesday. “Anybody can still put them on to feel comfortable.”

Early in the pandemic, a previous health order by Health Officer Munday had included a mask requirement even though the science about their efficacy was inconclusive. Since then, numerous scientific reports have backed their effectiveness, he told the county Board of Supervisors on Aug. 10.

Though the county had experienced a greater rate of daily cases and positivity rates prior, its decision to adopt a countywide indoor mask requirement was driven largely by the increased hospitalization rates of neighboring San Diego and Riverside counties, said Public Health Director Janette Angulo.

“It’s not just what happens in Imperial County,” Angulo said on Wednesday. “When we see that hospital capacity (decreases) in other counties, then of course it is a concern for Imperial County.”

San Diego County reported a 16 percent increase in its seven-day average of COVID-positive hospitalized patients compared to the prior week. Of the 4,707 hospital beds in use, 599 were COVID-positive patients, 142 of which were in an intensive-care unit, according to the county’s weekly update published Aug. 18.

The Valley’s comparatively lower daily case rates and positivity rates were attributed to its greater vaccination rates, which placed it in the state’s top 10 for the fully vaccinated and the top four for those who have had at least one dose, Angulo said.

In recent months the county shifted away from mass vaccination events and instead has relied on partnerships with community-based organizations, pharmacies, and healthcare providers to help vaccinate local residents closer to their respective homes.

“Lately, it’s been more neighborhood kind of clinics,” Angulo said. “At this point I’m not sure which one has been more effective.”

In regard to the mask mandate, exemptions to the latest health order do exist. Those exemptions include, but are not limited to:

• Persons working alone in a closed office or room;
• Persons actively eating and/or drinking;
• Persons swimming or showering in a fitness facility.

Additionally, the California Department of Public Health issued guidance that also exempt the following individuals from wearing masks at all times:
• Persons younger than 2 years old;
• Persons with a medical condition, mental health condition, or disability that prevents wearing a mask. This includes persons with a medical condition for whom wearing a mask could obstruct breathing or who are unconscious, incapacitated, or otherwise unable to remove a mask without assistance. As appropriate, non-restrictive alternatives must be used;
• Persons who are hearing impaired, or communicating with a person who is hearing impaired, where the ability to see the mouth is essential for communication. As appropriate, non-restrictive alternatives must be used; and
• Persons for whom wearing a mask would create a risk to the person related to their work, as determined by local, state, or federal regulators or workplace safety guidelines.

However, individuals exempt from wearing face coverings in public indoor settings are required to wear a face shield with a cloth drape attached at the bottom unless otherwise advised by their physician.

COVID-19 vaccines are available for individuals 12 years and older and easily accessible at many provider sites throughout Imperial County, including healthcare offices, hospitals, community clinics, pharmacies, as well as the Imperial County Public Health Department.

To locate a vaccine site, visit VaccineFinder at http://vaccinefinder.org. To make an appointment through California’s MyTurn system, visit https://myturn.ca.gov or call 833-422-4255.

Next
Get Out the Vaccine Campaign Aims to Assist