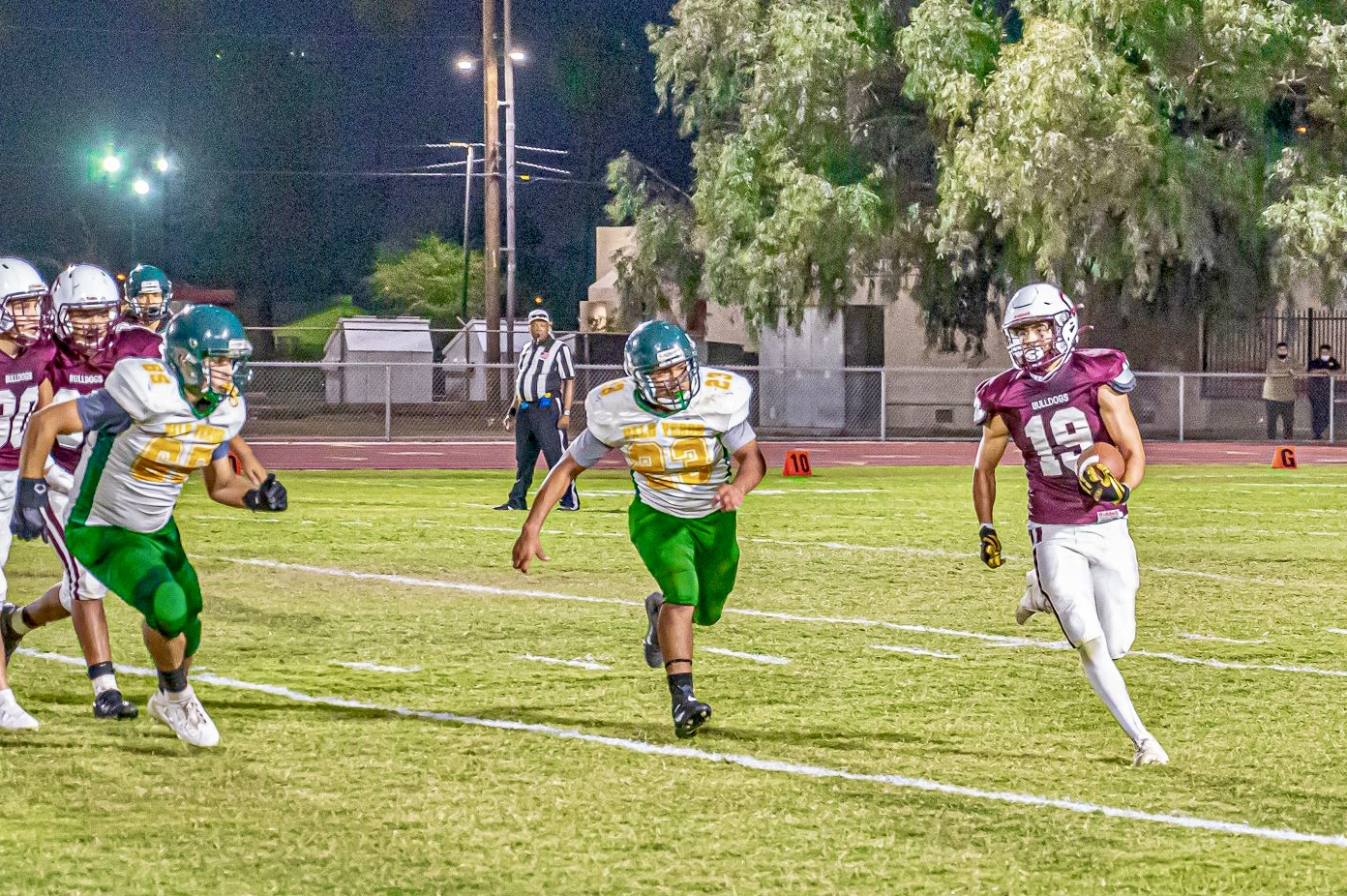 Calexico High School sophomore Andrew Rivera tries to get around the edge against Palo Verde Valley High of Blythe during a nonleague game at Ward Field in Calexico on Friday, Aug. 20. | CAMILO GARCIA JR. PHOTO
Home
Sports
In Sports

Turnovers, Other Miscues Lead to 15-6 Loss Against Palo Verde

The Bulldogs lost their season-opener, 15-6, against Palo Verde Valley High of Blythe at Ward Field in Calexico on Friday, Aug. 20, as four turnovers, a blocked punt and failure to field a kickoff aided the Yellowjackets’ cause.

Second-year Calexico coach Fernando Solano preached during training camp about limiting the mental and physical mistakes, but Friday’s nonleague loss was eerily familiar to last season’s losses when the Bulldogs would stop themselves.

“I’ve gotta give it up to our guys, they went out there and played lights out,” Solano said. “But these mental mistakes are just killing us. We get something going and then a mistake just stops us and takes away our momentum.”

Calexico’s opening drive was a microcosm of things to come as the Bulldogs’ first play from scrimmage was a 34-yard scamper from senior quarterback Abram Zazueta down to Palo Verde’s 11-yard line. From there the Bulldogs went backward eight yards before Zazueta threw an interception on fourth down.

The second drive for the Bulldogs mirrored the opening drive as Zazueta rattled off a 31-yard run on the first play only to halt the drive three plays later with an interception.

“I felt good tonight and I think I can be a leader for the team,” said the 16-year-old Zazueta, who started his first-ever game at quarterback. “I know as the season goes on I can help get my teammates better.”

While Calexico’s offense was sputtering in the first half, the Bulldogs’ defense was bending, but not breaking. Palo Verde mounted two 11-play drives in the half that resulted in no points after Calexico forced turnovers on downs.

After Calexico’s defense held on a fourth down midway through the second quarter, the Bulldogs’ offense took over on its own 9-yard-line.

After getting pushed back to the 4-yard-line, they were forced to punt, but a bad snap allowed the Yellowjackets to rush in and block the punt out of the back of the end zone for a safety, putting Palo Verde up 2-0.

On the ensuing kickoff, Calexico’s return team didn’t jump on the live ball and Palo Verde recovered at the Bulldogs’ 48-yard-line. The Yellowjackets needed just eight plays to get back in the end zone with Macon sprinting the final 16 yards for the score to build the lead to 15-0.

“Our defense was on the field almost the entire second half and those guys played their hearts out,” Solano said. “We have simplified the defense, coach wants them to put pressure on the other team and make highlight plays.”

Zazueta, who also plays middle linebacker, made a highlight play midway through the fourth quarter when he tackled and stripped a Palo Verde runner of the ball, recovered the fumble and gave the Bulldogs’ possession at the Yellowjackets 27-yard-line.

WRESTLING: Vikings 3rd at Queen of the Mat

“It is tough playing both ways and playing linebacker against an all-run team like them,” Zazueta said. “There were times I was feeling gassed out there. I’m sure I’ll do better once I get my conditioning better.”

After his fumble recovery, junior backup quarterback David Esquer came in while Zazueta was getting a breather and tossed an 18-yard touchdown pass to senior Ernie Sanchez to close the gap to 15-6 with 3:56 left in the game.

Palo Verde was able to run out all but the final 21 seconds of the clock and the Bulldogs weren’t able to do anything with their final two plays.

Xavier Bejerano led a trio of dominant rushers for Palo Verde with 123 yards on 17 carries, followed by Macon with 93 yards on 18 carries and Aizik Gonzales who had 61 yards on 13 carries. As a team, the Yellowjackets rushed 60 times for 288 yards, while only attempting one pass, which was intercepted by Calexico’s Andres Ramirez.

The Bulldogs return to Ward Field in Calexico on Friday, Aug. 27, when the host Castle Park High of Chula Vista at 7 p.m. in a nonleague showdown.

Next
Heber Park Reboot Due in Summer ’23