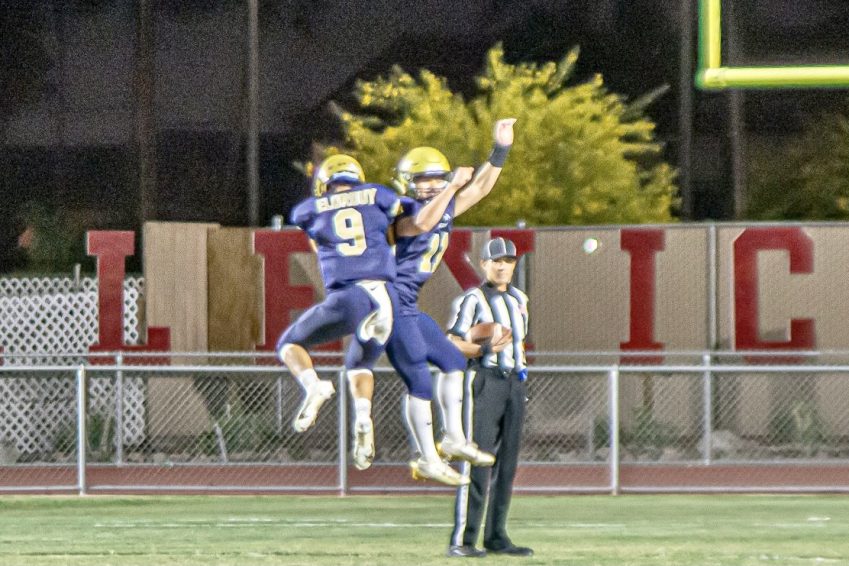 Vincent Memorial’s Diego Elorduy and Noe Saenz celebrate after a 52-yard touchdown pass against Calexico in the Battle for the Border at Ward Field in Calexico on April 16. Elorduy was back under center in the Scots' season-opening loss on the road at San Diego High on Friday night, Aug. 20. | CAMILO GARCIA JR. PHOTO
Home
Sports
In Sports

SAN DIEGO — Mistakes and inexperience cost the Vincent Memorial Catholic High School football team on Friday, Aug. 20, as the Scots fell to San Diego High 55-8 here in the nonleague season-opener for both squads.The Scots, who are trying to replace 17 seniors from the 2021 graduating class, fell behind 28-0 after the first quarter and trailed 41-0 at the half.

“We’ve got a lot of young guys out there still trying to figure things out,” said David Wong, Vincent Memorial’s head coach. “We made way too many mistakes, including too many bad snaps. Our quarterback is picking up the ball and having to run for his life.”

Down 41-0 at the half, San Diego, a CIF-San Diego Section Division II team, returned the second-half kickoff for a touchdown to increase the lead to 48-0. It’s after that score where Vincent Memorial’s lone bright spot happened.

Senior quarterback Diego Elorduy hit junior wideout Andre Rodriguez in stride and he was able to make a would-be tackler miss and race 40 yards for a touchdown. Elorduy was also able to complete the two-point conversion to make the margin 48-8.

“We’ve got to go back to the fundamentals and teach the basics,” Wong said. “We gave up a punt return touchdown and we had six missed tackles on that one play.”

“We only worked on special teams a couple days this week so we have to go back and get more practice time with that,” Wong said. “For us, it’s a question of what we do from here and how do we get better.”

The Scots return to the gridiron on Friday, Aug. 27, when they travel to Southwest High School in El Centro to take on the Eagles, 36-29 losers to Holtville on Friday, Aug. 20. Vincent Memorial is scheduled to be the home team for the game as the Scots use that as a home field since they don’t have one of their own.