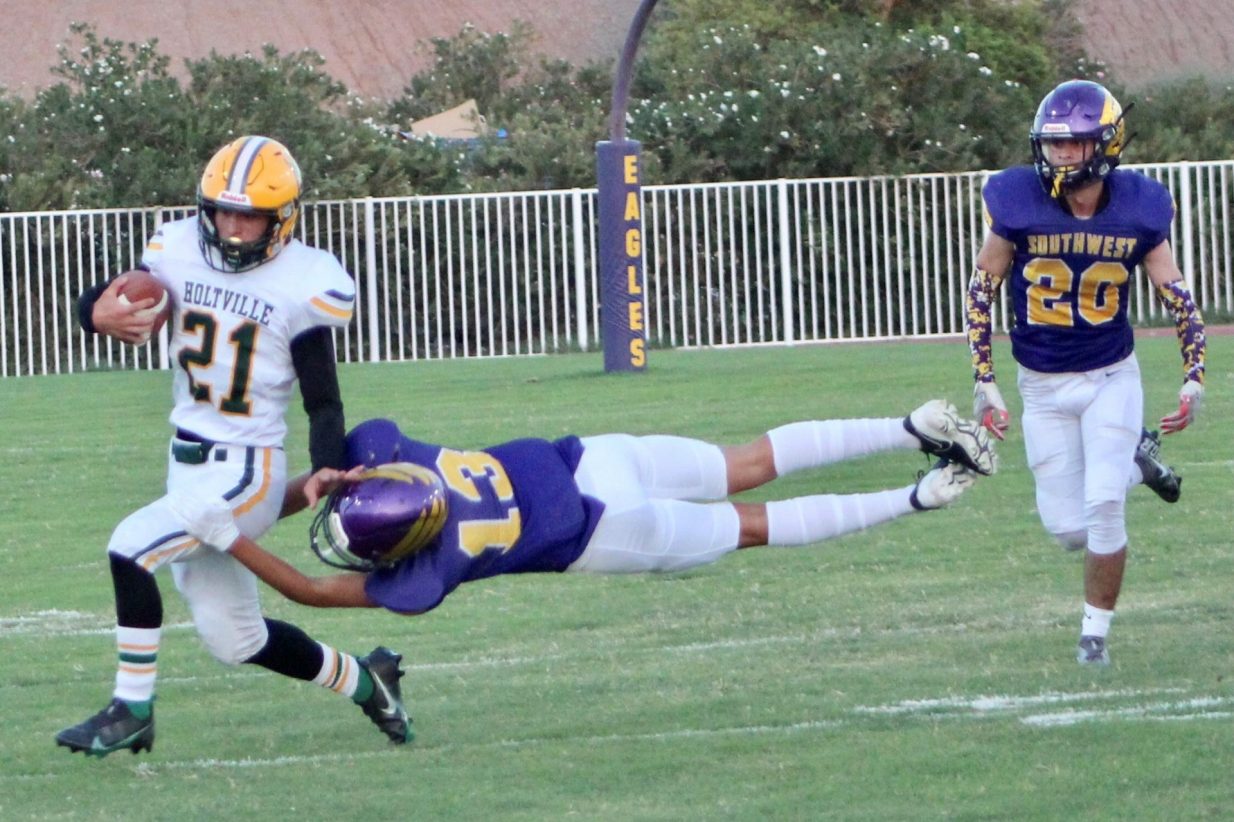 Even though the youth showed at key moments against the Eagles, the Vikings’ offense was able to do just enough to get the 36-29 nonleague victory.

Turner noted that the last time some of his team had been in an actual game was either in middle school or on the freshmen level at the high school in 2019. Either through missed assignments or inopportune penalties the Vikings often negated the better plays their defense made against the Eagles squad.

“We knew the question coming in was how would our guys react when they got hit back and when adversity arose,” Turner said. “We had way too many penalties but we found out these guys are ready and willing to compete with anybody.”

Holtville’s offense was bolstered by the strong running of the Iten brothers who carried the workload for the Vikings. Senior Payton Iten finished with 94 yards on the ground, but was bested by his younger brother Seth, a sophomore, who carried the ball for 103 yards.

After forcing a punt on Southwest’s opening possession, Holtville took over and was able to score just five plays later when Seth Iten broke free for a 54-yard scamper to the end zone. Payton Iten ran in the two-point conversion and the Vikings were up 8-0 with 5:15 left in the first quarter.

The homestanding Eagles got on the scoreboard at the end of an eight-play drive as their 280-pound defensive end Seneca Haines rumbled across the goal line from the 2-yard line with 11:54 left in the first half. The extra-point kick was delivered by Andres Maldonado and the score stood at 8-7.

Southwest took the lead at the 8:19 mark of the first half thanks to a 14-yard touchdown pass from quarterback Logan Jungers to receiver Armando Zavala to give the Eagles a 13-8 lead.

Holtville didn’t wait long to retake the lead, going on a seven-play drive that ended with a Spencer Hilfiker 15-yard touchdown pass to tight end Mason Toten. Seth Iten ran across for the two-point conversion and the visitors were ahead again, 16-13, with 3:51 left in the first half.

Payton Iten would increase the Vikings’ lead just before halftime when he burst down the sideline on a fourth-and-3 play, stepping out of bounds at the 2-yard line with 44 seconds left in the half. After an encroachment penalty moved the ball to the 1-yard line, Payton Iten finished the drive with a touchdown plunge to give Holtville a 22-13 halftime lead.

“With the mistakes and the penalties it certainly wasn’t our best game, but we were able to do what we had to do to come away with the win,” Payton Iten said. “I thought our offense played well and the line was doing a good job of opening things up for me and my brother.”

Holtville’s Zephan Duarte returned the second-half kickoff to midfield that ignited a seven-play touchdown drive. Hilfiker again hit his tight end Toten who broke free from a tackler at the 35-yard line to shuffle down the sideline for his second touchdown. Daniel Ledesma ran in the two-point conversion and the Vikings extended their lead to 30-13 with 8:25 left in the third-quarter.

Southwest narrowed the gap to 30-21 when Jungers lofted a pass to wideout Nate Smith Jr. for a score in the corner of the end zone. The two-point conversion proved successful as Jonah Estrada pulled in a pass from Jungers as well.

With 37 seconds left in the third quarter, Hilfiker increased the Vikings’ lead to 36-21 when he scored on a two-yard keeper.

Things got interesting with 8:05 left in the fourth quarter when Southwest running back Isaiah Torres scored on a two-yard touchdown run. The two-point conversion was a successful toss from Jungers to Smith Jr. and the Eagles were within a score at 36-29.

The Eagles’ final opportunity was snuffed out when Mason Toten sacked Jungers with 1:12 left.

Toten admitted that his second touchdown was exciting as he broke free for the score, but he was especially satisfied with sacking the quarterback at the end of the game because it best helped the team get the win. “I like playing defense best,” he said.

Holtville will be back on the gridiron at 7 p.m. on Friday, Aug. 27, when the Vikings travel to Pine Valley to take on Mountain Empire High in a nonleague contest. The Vikings and Redhawks will meet later in the season for their Desert League matchup.

Holtville’s freshman/sophomore team will be traveling to take on Central Union High in El Centro at 6 p.m. on Thursday, Aug. 26.

(This story was updated at noon on Monday, Aug. 23, to correct information on Southwest High’s team members.)

Previous
Licensing by Clerical Error: How the State’s Mistake Decided the Course of Two Nursing Homes

Next
FOOTBALL: Wildcats Blown Out by Mater Dei