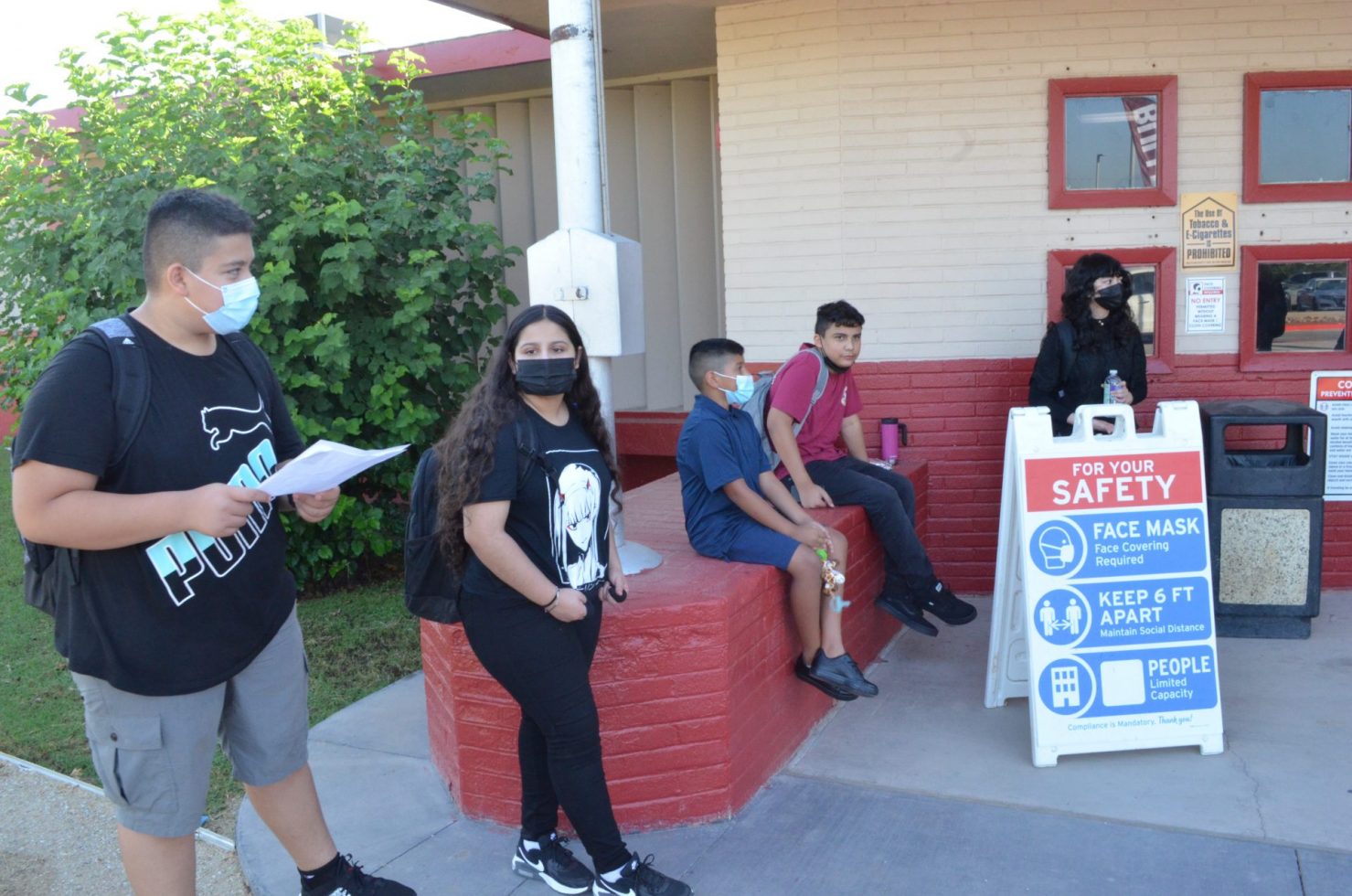 Ninth-grade students Mario Moreno (left) and Melany Herrera (second from left) wait in front of Calexico High for transportation to the nearby ninth-grade campus the morning of Monday, Aug. 23 for the first day of school. | JULIO MORALES PHOTO
Home
Education
In EducationRegional News

Over 2,200 Students Enrolled at Main and Ninth-Grade Campuses as of Monday, Aug. 23

Even before the start of the 2021-2022 school year on Monday, Aug. 23, Mario said he had already been participating in practice for the high school’s junior varsity football team.

Nor does he plan to limit himself to just football, now that previous COVID-19 restrictions on competitive sports have lifted and he’s in a grade level where can participate on more teams.

“I have a bucket list with a lot of sports I want to do,” Mario said as he waited outside of the high school’s entrance awaiting a ride to the nearby Ninth Grade Campus. “This year I want to do football then wrestling and baseball.”

Mario was one of the more than 2,200 Calexico High School students who returned to the main and ninth-grade campuses for the start of the school year on Monday.

In contrast to the close of the last school year, when Calexico Unified School District had offered its students either a mixture of in-person and distance learning or solely distance learning, students can now attend completely in-person or enroll in the district’s independent study program.

Tenth-grade student Joshua Garcia said he was glad to be back on campus in a full-time capacity on Monday. Distance learning had presented something of a challenge, he said, and being in class with his peers and teachers will get him more engaged.

Joshua also said he had gotten used to wearing a face covering in public settings throughout the pandemic, so the recent statewide requirement for all students to do so while indoors on campus was hardly an inconvenience.

Nonetheless, he wasn’t sure what to expect for his sophomore year, considering he was attending the main campus for the first time and the ongoing COVID-19 pandemic remained a viable concern.

“I think it’s going to be different,” Joshua said.

For incoming freshman Melany Herrera, the start of the new school year and a return to in-person instruction put an end to the convenience of learning from her home, where she said it was easier for her to concentrate.

The resumption of classes also spelled an end to what Melany described as a rather uneventful summer, on account of the restrictions and concerns that the pandemic has imposed upon much of the public.

But with in-person instruction now the norm, Melany said she was anticipating a return of time-honored high school activities and milestones.

“I’m looking forward to meeting my friends again, and getting to know teachers,” she said.

Aside from the crossing guards and various campus officials, students returning to CUSD campuses were also greeted by temperature-scanning kiosks before they were able to enter their respective campuses.

Additional health and safety measures include the installation of handwashing stations, hand sanitizer, and soap dispensers in almost every class on every campus.

School sites have also installed plasma air-purifier systems, which use ionization technology to purify and improve indoor air quality and which have been shown to effectively kill 99 percent of all bacteria and viruses within the air, the CUSD website stated.

The start of the school year in Calexico briefly follows Gov. Gavin Newsom’s announcement on Aug. 11 that all K-12 teachers are to be vaccinated or undergo weekly COVID-19 testing.

At Calexico High, campus officials helped direct students to one of two temperature-scanning devices placed just outside the main entrance. Because of the sheer size of the campus’ student body, a line consisting of dozens of students could be seen forming at times.

A “nervous” 16-year-old Valerie Bosquez had to briefly wait her turn in line before entering the campus. Her slight trepidation stemmed from not knowing her class schedule.

The 11th-grade student said she didn’t have a preference for either distance learning or in-person instruction and considered school in general to be “boring.” Despite that assessment, Valerie did confide that she was looking forward to one day attending college.

“But I’m not sure what I want to study yet,” Valerie said.

As the last of the campus’ students filtered in by about 8:20 a.m., Calexico High School Principal Gabrielle Williams-Ballesteros finally found herself free from the anxious questions that students and parents cast her way as she stood outside the campus’ entrance before the start of the school day.

“It’s exciting, it’s a lot of work, it’s overwhelming,” Williams-Ballesteros said about the start of the school year, before adding: “It’s rewarding. It’s really nice to see all these kids’ faces.”

The campus has the largest student body size of any campus in the Valley and has typically averaged anywhere between 2,200 to 2,300 students during the last six years that Williams-Ballesteros has been at the helm. This year’s enrollment hovered around 2,230 as of Aug. 23.