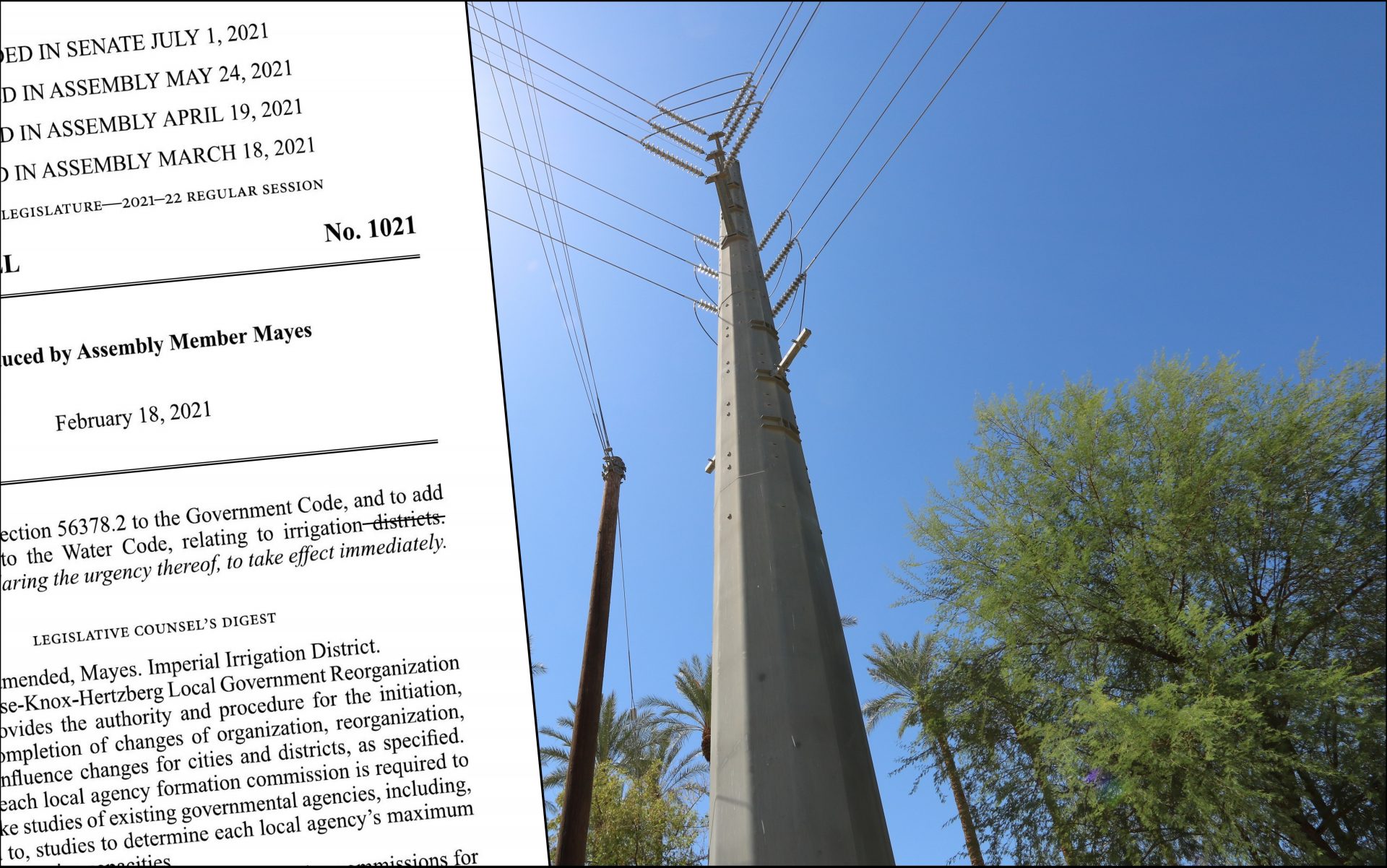 AB 1021 Made Toothless, But Will It Bite Again?

An Assembly bill that would have added a non-voting member to the Imperial Irrigation District’s board has been gutted, its most contentious provisions dropped, and now it moves forward as a toothless version of its former self.

Assembly Bill 1021 might have forced the IID — which provides water and power to virtually all of Imperial County, and electricity to part of the Coachella Valley — to add a seat representing energy ratepayers from a small section of southeastern Riverside County to the IID Board of Directors.

That is, if the bill could have stood up to what would no doubt have been legal challenges from the district, which has said it would fight tooth and nail to protect its historical water rights.

IID Division 2 Director and board Vice President JB Hamby said he was relieved that office of the bill’s author, Assembly member Chad Mayes, I-Rancho Mirage, removed the clause for an ex-officio board member.

“What we had was a bill that was going to alter the governance of the IID and would impair the IID. With diplomacy, working with the Legislature, we were able to come up with a local solution for local issues,” Hamby said.

Yet even in its previous form, a nonbinding legislative analysis from July for the benefit of the voting committee members of the Legislature casts doubt on whether AB 1021 could have withstood the eventual legal scrutiny.

The analysis also calls into question whether an early version of the IID’s Coachella Valley Energy Commission, which was created to head off the very reason for the creation of AB 1021, would even provide “a meaningful voice for IID’s electricity customers in the Coachella Valley.”

Although the analysis and its advisory findings were known to the IID, Mayes, and the members of the committees voting to move the bill forward, it’s unclear why it continued to advance and whether there was any need, ultimately, for the saber-rattling that ensued by both the IID and Mayes.

What remains of the bill is set to advance to the Senate floor, where it is likely to pass. The focus of AB 1021 now mostly encompasses $500,000 for a joint Imperial County-Riverside County Local Area Formation Commission study of energy future issues in Riverside County, including options for continued energy service in the area IID serves in Coachella Valley.

Although Hamby and others in the IID and on the board are chalking up the exclusion of so many of Mayes’ biting amendments as a win, IID Division 1 Director Alex Cardenas is urging caution.

“It’s a mistake to claim victory on a bill that was fatally flawed once it was amended to include an urgency statue,” Cardenas wrote in an email to the Calexico Chronicle on Saturday, Aug. 21.

After all, AB 1021 itself is Mayes’ second attempt to interject Riverside County membership onto the district Board of Directors.

Two years ago, Mayes’ first attempt to add members to board failed. In 2019, Assembly Bill 854 proposed six additional voting Coachella Valley representatives to the board, which would have given the majority to Riverside County. That effort did not get enough support to move out of the Assembly’s Rules Committee and onto the Assembly floor.

It also required the joint LAFCO study on the extension of elected representation to Coachella Valley ratepayers and options for continued energy service.

“They (Coachella Valley residents) don’t have a say in their local government. It’s like taxation without representation,” Mayes said in a previous interview with the Calexico Chronicle. Mayes has argued that the IID’s current board does not give its customers living outside its water service area a say in how the utility operated.

And while the bill has softened in its stance, Mayes vowed in that earlier interview that he would not let up until a Coachella Valley representative with full voting rights sat on the IID board.

That initial versions of the bill were seen by IID officials as a possible opening for outside interests to seize control of the Imperial Valley’s lifeblood, its water, and the result was a vigorous campaign against the bill, mostly by Hamby, who formulated the Coachella Valley commission and went around southeastern Riverside County to sell it.

Throughout, both sides traded barbs publicly, as IID officials characterized AB 1021 as a water grab and threatened to pull out of Coachella Valley as a service provider and to sue in federal court.

“There’s a game of chicken being played and it’s not necessary. We’re trying to address everybody’s concerns. If it continues to move forward, we’re prepared to cut off our nose to spite our face, that’s how serious we are,” Hamby said to the Calexico Chronicle at the time.

IID rushed to establish the Coachella committee to give area ratepayers a voice at the table. Mayes turned up the heat on the IID with a number of amendments.

But, behind the scenes, both sides were in close contact.

And its not clear why the nonpartisan Senate Governance Committee analysis that raised so many doubts about the bill’s viability was never something bandied about in those public sparring matches.

Six months after the bill was introduced, the requirement for an additional board member was quietly dropped, rendering the bill comparatively weakened and almost sure to be approved. The IID managed to keep an outsider off its board of directors, and Mayes forced the IID to give Coachella Valley ratepayers a seat at the table.

The reality is, no matter which valley one calls home, the case can be made on both sides about inequities. About 60 percent of the IID’s rate base is in Coachella Valley, and the power operation brings in more than half of the district’s revenues.

What’s more, threats to pull out of providing power in Coachella Valley to prevent AB 1021 from being enacted would almost certainly have had a financial impact on the IID’s energy customers in Imperial Valley. And, federal litigation is expensive and time-consuming.

Despite the tough rhetoric, both sides stayed in close contact all along.

Hamby met with local government representatives, the Torres Martinez tribe, Supervisor Perez and other stakeholders in the Coachella Valley to ascertain what they needed from the IID, and to drum up support for the Coachella Valley Energy Commission. Hamby argued that the new committee would appease Coachella Valley residents without allowing their involvement in water matters.

The IID board approved the commission when it met in La Quinta on July 13. The commission held its first meeting on Aug. 5.

“I think it’s great that IID has recognized the necessity to provide some greater representation,” Mayes has said. “This Coachella Valley Energy Commission that has been proposed is a step in the right direction. But we can’t take our eyes off the ball, which is doing the right thing. The right thing, as a public entity, is that there’s got to be full-fledged voting rights for the people of that electrical service territory.”

The question of Coachella Valley representation on the IID board goes back decades. Imperial and Coachella valleys receive water from the Colorado River via the All-American Canal. The U.S. Department of the Interior initially wanted to merge the IID and Coachella Valley Water District into one district, but Coachella Valley landowners sued to block the initiative in order to maintain their independence. The IID and CVWD signed an agreement in 1934 to settle the disputes. Both agencies would remain independent, and the IID would get priority water rights and a 99-year power lease with the CVWD in exchange for 8 percent of the net proceeds.

When AB 854 failed, it was clear that was not to be the end to Mayes’ overtures.

“Two years ago, all parties agreed to try to work together. Minimal progress was made,” Assembly member Eduardo Garcia, D-Coachella, said in an earlier interview with the Calexico Chronicle. “More progress was made the last three months than the last two years. This proposal was the effort expected two years ago.”

Garcia represents the 56th Assembly District, which encompasses all of Imperial County and a portion of eastern Riverside County, which effectively puts him in the crossfire between the IID and Mayes. Garcia voted for the bill.

Although AB 1021 sailed through the Assembly on the way to the Senate, it wasn’t until Mayes’ office added an “urgency” clause on July 1 that IID officials began to feel the tightening of the screws. That version moved up the due date of the LAFCO studies from July 1, 2023 to July 1, 2022, and added an urgency statute for the bill to go into effect immediately “due to the extreme conditions the state is facing regarding water and energy.”

“We’ve had literally dozens of meetings,” Hamby said. “The expectation was that there would be some reciprocity. We do a good turn, and a good turn would be done to us. And then we get these midnight amendments.”

When the nonpartisan Senate Governance and Finance Committee analysis was released prior to the July 8 committee hearing, it noted that the Public Utilities Code authorized the formation of municipal utility districts that provide energy as a service, and LAFCOs provide the means for communities to form electrical districts. It went on to ask if the Legislature should intervene if local voters haven’t decided that they want their own district.

It distinguished between annexations and extensions of service.

“An extension of service is when a local agency extends the provision of services to individuals who do not reside within the actual boundaries of that agency. An annexation is when the boundaries and jurisdiction are changed to include territory, giving the annexed residents full rights and privileges as voters. … The Riverside County residents that receive electricity from IID have never been fully annexed into IID’s boundaries, and as a result, do not have the ability to choose their representatives on the Board.”

The IID has since modified the composition of the committee, reducing the number if IID directors to two, and increasing by one the at-large representatives appointed by Coachella Valley stakeholders.

Amendments published on Aug. 16 effectively eased the pressure on the IID. They distinguished between water and power and stressed that the Coachella Valley representative would focus just on energy issues. Three days later, the provision that the IID hoped to see amended was removed entirely, leaving just the requirement for the LAFCO studies.

“The ex officio didn’t have to be removed,” Hamby said. “But it became clear there was no need to have an ex-officio member, and that we could more effectively resolve these complicated issues by working together.”

Assembly member Garcia emphasized that spirit of collaboration in an emailed statement to the Chronicle on Monday, Aug. 23.

“It was important for us to step in and help bring folks together on a more constructive, collaborative path to ensure concerns in both sides of my district were addressed,” Garcia said. “These amendments reflect the productive dialogue between all parties and our mutual desire to protect what is important to our Imperial Valley community. With these good faith efforts of the author, I am hopeful that positive steps will continue to be taken to amicably resolve remaining issues, plan for future energy needs, and elevate engagement with IID.”

(This story was updated at 12:45 p.m. Tuesday, Aug. 24, to clarify the IID’s power department revenue vs. its water side, and the modified composition of the Coachella Valley Energy Commission.)