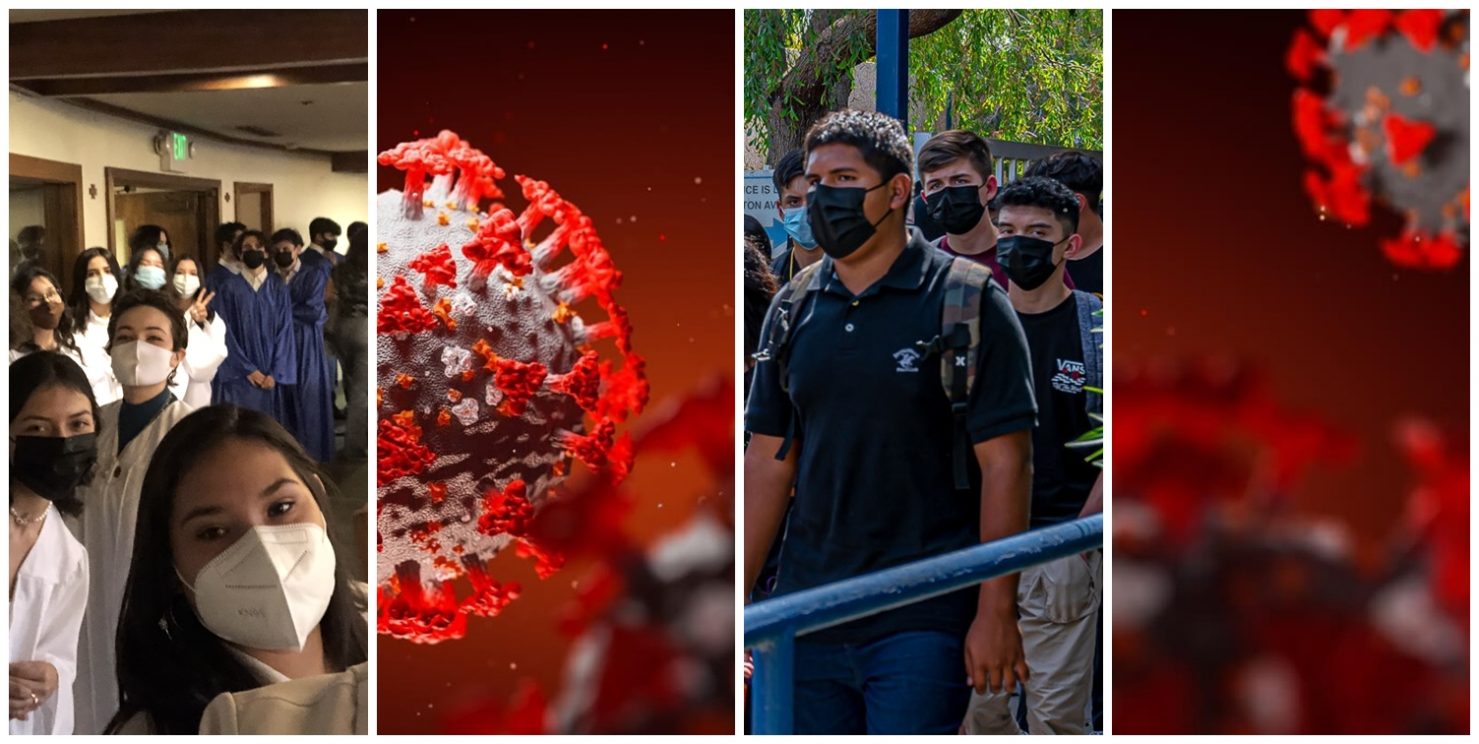 As students and staff return to Imperial County campuses for full-time in-person instruction, outbreaks of COVID-19 are being seen in several cities and on several campuses this week. | COURTESY AND STAFF PHOTO GRAPHIC
Home
COVID-19
In COVID-19Featured StoriesRegional News

The Delta variant-fueled COVID surge gripping the rest of the country appears to be picking up its pace in the Imperial Valley.

Nowhere is that becoming more apparent than in the rumored and real accounts of COVID case investigations and positive tests at schools around Imperial County just as the bulk of the region’s students returned to in-person instruction this week.

As reports of campus-based infections made their way among social media circles from parents and community members, Imperial County Public Health Department’s top official confirmed a handful of outbreaks on Tuesday night, Aug. 24.

Although Angulo did not address specific school sites when presented with various letters sent to parents that were being shared on social media, she addressed the sobering data that many of the new infections are among youths.

“In the recent weeks and of the total new positive cases, 28 percent have been in children younger than 17,” Angulo added. “Since the pandemic started in 2020, over 180 outbreaks have been reported. These have been in different settings, including schools.”

Angulo added later that this percentage varies week to week as new positive cases are reported. The cumulative total of cases (since the pandemic started and as of Tuesday, Aug. 24) in the younger population is as follows: “0-9 age group = 1,605 positive cases, 10-19 age group = 3,120 positive cases.”

Although not verified in every case, there appears to be either single or multiple positive cases at Aurora High School, Jefferson Elementary, Kennedy Gardens Elementary, and Enrique Camarena Junior High, all in Calexico; Brawley Union High School, Myron D. Witter Elementary, and J.W. Oakley Elementary, all in Brawley; T.L. Waggoner in Imperial; Westmorland Union School District; Southwest High School and Kennedy Middle School, both in El Centro last week, and reportedly, among staff at the Imperial Valley Center for Exceptional Children in El Centro.

Outbreak-level numbers (three or more) would necessitate some level of closure and cleaning.

An outbreak is defined as a cluster of three or more positive cases in any workplace or school site, according to the reporting requirements of Assembly Bill 685. In the case of Brawley High, for instance, an update sent to parents on Tuesday morning stated that two confirmed positive cases had last been on campus on Monday, Aug. 23, and were now being isolated.

There seems to be a dearth of information coming out of some districts, as cases and case investigations have not been reported, according to some parents, from districts such as the Central Union High School District in El Centro, where reported positives went to sources other than parents. That information is still developing.

“Per state requirements, public and private schools are required to report positive student and staff cases of COVID-19, as well as information on exposed staff and students to the Imperial County Public Health Department. Schools are also required to notify individuals (students, staff, visitors) about potential cases and exposures,” according to Angulo in an updated statement sent after this story first published.

“The Public Health Department works closely with the school liaison on case reporting, contact tracing and investigation. Locally, schools have been reporting positive COVID-19 cases and exposures electronically through a portal that was developed by our department several months ago for this purpose. Isolation recommendations for positive cases and quarantine recommendations for close contacts are followed. Cleaning and disinfecting recommendations are also followed. Schools have COVID-19 Safety Plans in place that should include the safety measures in place,” Angulo’s statement continued.

Meanwhile, in response to what appears to inconsistent reporting by districts, a closed Facebook group titled “Imperial Valley Schools COVID case” was started sometime Thursday, Aug. 26, encouraging parents to report outbreaks as a way to keep each other abreast of infections.

“I just thought about it last night (and) made a post asking if there was already a group. Comments said I should make one and I did. It felt (it was) needed due to (Facebook) posts everywhere talking about exposure, but a group could be the place to post it instead of the selling pages or your FB timeline,” said Erika Garcia of El Centro, the page administrator and a parent of a third-grade student.

The pages has quickly grown to include more than 800 members since it was created.

When the county released the most recent COVID data for the week on Aug. 24, the number of active cases had ballooned to 352, up from 219 active cases on Thursday, Aug. 19. Two additional COVID-related deaths (748) had been reported in that time, as well.

“There are other deaths pending investigation,” Angulo said earlier in the day Tuesday. Death investigations can take several weeks before a case is confirmed as COVID-related and posted to the county’s data.

A single pediatric death was confirmed in the 0-9 age group some months ago. Last week, El Centro Regional Medical Center reported that a 13-year-old has died of COVID. Angulo could not confirm that but said:

“A second pediatric death in the 10-19 age group is currently being investigated. Deaths are not confirmed until all proper documentation is reviewed and cause of death is verified,” she stated.

All of this comes as the latest variant report from county Public Health shows that over each of the past three weeks, the instances of the highly transmissible Delta variant responsible for the vast majority of cases in the United States since mid-July have doubled in the county — from 22 cases gene-sequenced for the week of Aug. 9, to 46 cases on Aug. 16, exploding to 114 cases detected for the most recent report released on Monday. These cases also involve delayed reporting due to extended time it takes to sequence the samples, which is done outside Imperial County.

“Definitely, Delta is here. … and that number is going to increase; pretty much everything is Delta,” Imperial County Health Officer, Dr. Stephen Munday said Aug. 24. “Now, the only time we’re seeing other variants are when we have people coming to us from other communities.”

Angulo said she thinks in the next few weeks Delta will be the most prominent variant in Imperial County. For now, the county is still seeing the primary variant of concern as the Gamma variant, or what has been referred to as the Brazilian or Japanese variant. There were 128 cumulative cases of Gamma found in Monday’s report.

The rapid rise in Delta cases coincides with the high positivity rate Imperial County is seeing, Dr. Munday said, but that is not leading to the same increased rate of hospitalizations locally that California as a whole and nearby counties are experiencing.

That is attributed to the high rate of vaccination Imperial County has, Munday said.

Case rate positivity in Imperial County was 12.9 percent for the week of Aug. 8 through Aug. 14, with 14 new cases per day per 100,000 residents over the same time period.

When Angulo made her presentation to the Imperial County Board of Supervisors on Tuesday morning, that positivity rate for Imperial was 10.4 percent. By comparison, California was at 5.4 percent, San Diego County at 7 percent, and Riverside County at 9.9 percent.

Hospitalization rates in Imperial County, however, are upside down in that regard. The Valley was at 19.1 hospitalized per 100,000 residents over a 14-day average, Angulo said, compared to more than 7,600 patients hospitalized in California, 573 patients in San Diego County, and 563 in Riverside County, all 14-day averages.

The vaccination rates continue to look up for the county, and Public Health even saw a boost as more people apparently grow concerned about the Delta variant. It also doesn’t hurt that hospitals nationwide are filled with nearly 99 percent unvaccinated patients.

“As far as vaccine administration, we’re close to 90 percent of our eligible population with at least one dose, 71.9 percent fully vaccinated, and 17.9 percent partially vaccinated,” Angulo said.

“This last week, we gave several 100 more vaccine doses here locally. We’re closer to 4,000 doses administered in a week, and prior weeks it was ranging in the lower 3000s,” the public health director added.

Munday said the vaccination rates are buffering residents from getting too sick and dying.

“We have a very high vaccination rate, and we are definitely benefiting from that. So, we have a high level of community immunity. It’s not enough to completely disrupt transmission and end the pandemic, but it is definitely benefiting our community. That along with the fact that it took the Delta (variant) a little bit longer to get here,” Dr. Munday said.

“It’s my belief that that has really benefited our community in terms of limiting severe disease and therefore limiting hospitalizations,” the health officer added. “But we can’t let our guard down because Delta is continuing to spread, the numbers are increasing.”

That is one of the chief reasons Munday decided to institute last week’s health order to return to indoor masking, no matter vaccination status: to provide another layer of protection against the increasing surge.

To that end, Angulo said the numbers for hospitalizations in the last 20 days have been doubling around Southern California, so vigilance is needed.

Imperial County Board of Supervisors Chair Mike Kelley asked whether Imperial County’s vaccination numbers were inflated due to the high number of farmworkers who have been inoculated, citing a recent CalMatters report in which the agricultural companies and the Imperial Valley Vegetable Growers Association were largely credited with getting so many field laborers vaccinated.

Angulo said only people using Imperial County addresses are counted toward the county’s totals. She acknowledged that some might be giving local addresses when they don’t actually live here, but for tallying purposes, only local addresses count.

It should be noted that absent from the CalMatters story was credit given to Salud Sin Fronteras, the local health justice organization established at the start of the pandemic to address farmworkers’ health concerns related to COVID-19.

Salud Sin Fronteras was instrumental in coordinating the push to get farmworkers vaccinated before any other local organization or group even started. In fact, Salud Sin Fronteras volunteers in many cases took over the registering of field workers on behalf of the ag companies.

Dr. Munday made a salient point about whether those vaccinated locally were residents or not.

Previous
Where to Get Your Print Edition

Next
Free PPE Available for Businesses at IV Fairgrounds