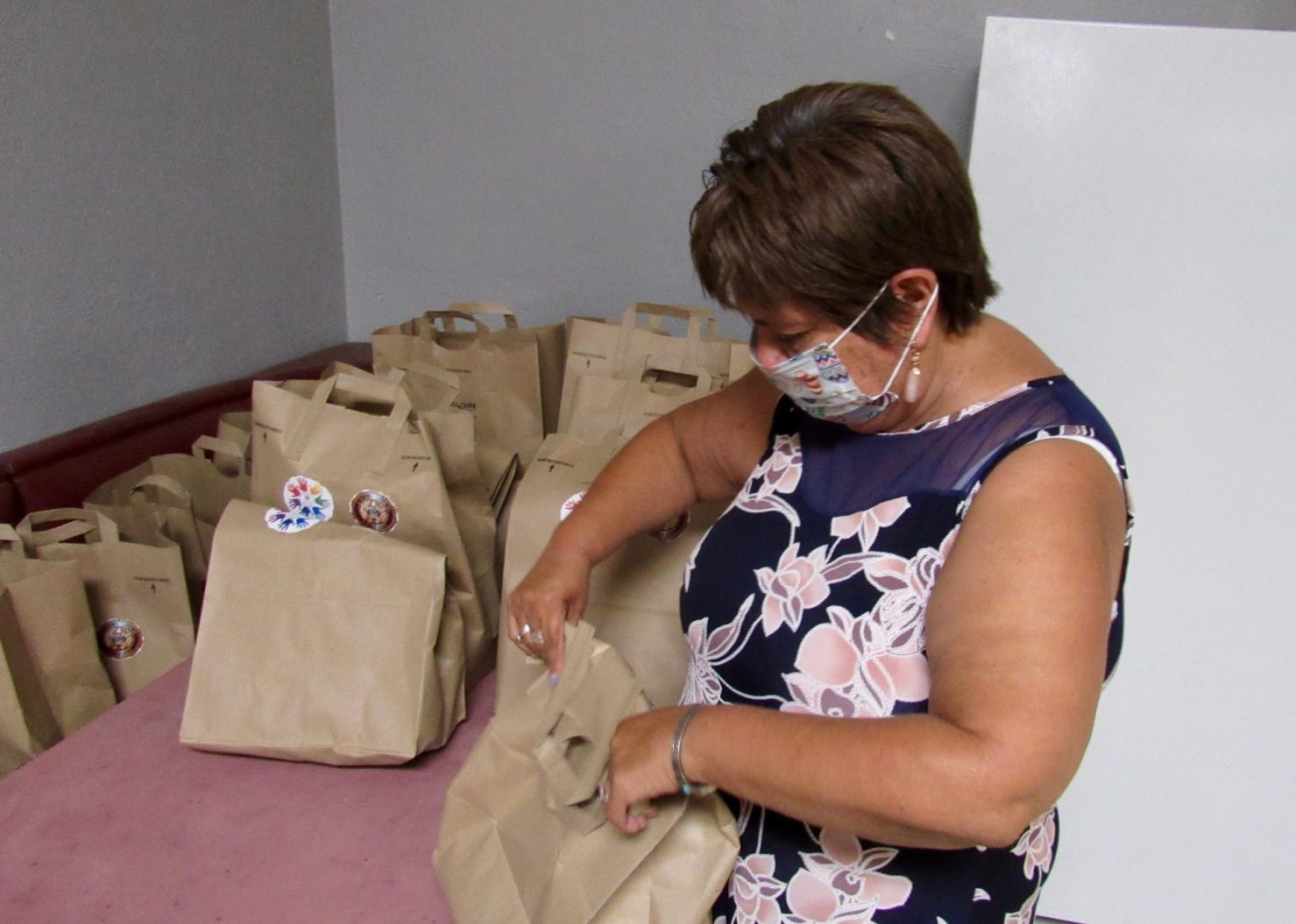 American Legion Boyce Aten Post 25 Cmdr. Ramona Campos prepares bags full of school supplies to be handed out to the students in El Centro on Monday, Aug. 23. Castro held a giveaway event at the post hall in the 500 block of Broadway in El Centro on Saturday, Aug. 21, but many bags remained. | MARCIE LANDEROS PHOTO
Home
Regional News
In Regional News

EL CENTRO — After 17 months of closure, the Boyce Aten American Legion Post 25 reopened its lounge area earlier this month under the leadership of the post’s second woman leader in its history, Cmdr. Ramona V. Campos.

“I am very honored to be post commander. It’s been like 60 years since there was a woman commander here,” Campos said during an interview on Monday, Aug. 23. She wasn’t very far off her estimation, with Louise Candland having served as post commander in 1959 and 1960.

The Boyce Aten post is proud of its legacy, and proud of its lounge, which reopened to its members and their guests on Aug. 6, Campos said.

“I am very happy the lounge is open,” Campos added during the interview, “and I excited to say that we are supposed to start serving steak dinners in person again on Sept. 10.”

Campos was not the only person to be excited at the reopening of the lounge. Jerry Slagle, a member of the American Legion, shared how he was feeling as he sat at the bar in the post’s lounge area at 569 Broadway on Saturday afternoon, Aug. 21.

“I am very happy this place is back open,” Slagle said. “I enjoy coming here and being with the people.”

A Storied History in Imperial Valley

Retired El Centro fire Battalion Chief Steve Wilson, who is the post’s finance officer, shared the post’s history as he led a tour through the hall on Aug. 21.

“You know, we were the first post in the Imperial Valley, and one of the first in California,” he said.

The Boyce Aten American Legion Post 25 received its charter in 1919, the same year that the American Legion was founded. It served as the Valley’s first chapter of the Legion, and today it serves the cities of El Centro and Imperial, Wilson said.

The post was named in honor of the first Imperial Valley resident to be lost during World War I, Albert Boyce Aten. Aten was a senior at Stanford University when he entered the U.S. Army in 1917, becoming a second lieutenant.

He died leading his company of gunners and infantrymen in a battle against German forces in France that same year, but his remains were not returned home until Oct. 24, 1921, Wilson explained.

Recently, an incident that occurred in 2019, which resulted in the post having its liquor license suspended in December of that year, cast a shadow over that long history. The post holds a Type 52 liquor license, which limits the sale of beer, wine and distilled spirits, to members and guests only.

At some point, someone reported that Post 25 was serving alcohol to a nonmember who was not signed in as a guest, and a visit from one of the state’s Alcohol Beverage Control agents shut down the legion’s bar and lounge briefly on Dec. 20, 2019.

Campos said that the closure then, and the prolonged closure gathering spots and bars during the pandemic, led to people believing that the Boyce Aten post’s lounge was closed permanently.

“We faced troubled waters, and did get our license suspended, but what people don’t realize is we opened back up by Jan. 4 (2020). We just re-shut back down in March for COVID,” she said.

“We are here to serve vets, their families, and the community,” the commander said. “We are a nonprofit, run entirely by volunteers. We use the money we make from selling steak dinners to pay our bills, so we can keep helping.”

The America Legion post’s dedication to helping residents in Imperial County was not dampened by its temporary closure. Its members continued to support the community, and according to Campos, after the fires that destroyed 40 homes in Niland in June 2020, Post 25 raised $4,000 to help those who had been affected by those devastation.

One of Campos’ projects could be seen scattered through the hall over the weekend.

“Those brown bags on the table, they (have) school supplies in them,” said Wilson, who on Saturday afternoon pointed to the sacks sitting on tables around the hall. “Ramona (Campos) had an event to hand them out this morning.”

Campos smiled when she thought of the event.

“Oh yes, we handed them out, but we still have so much more. I am starting to talk to the city of El Centro’s Community Center, hoping they will work with us to help get these to students, and maybe we can make this a regular thing we do.”