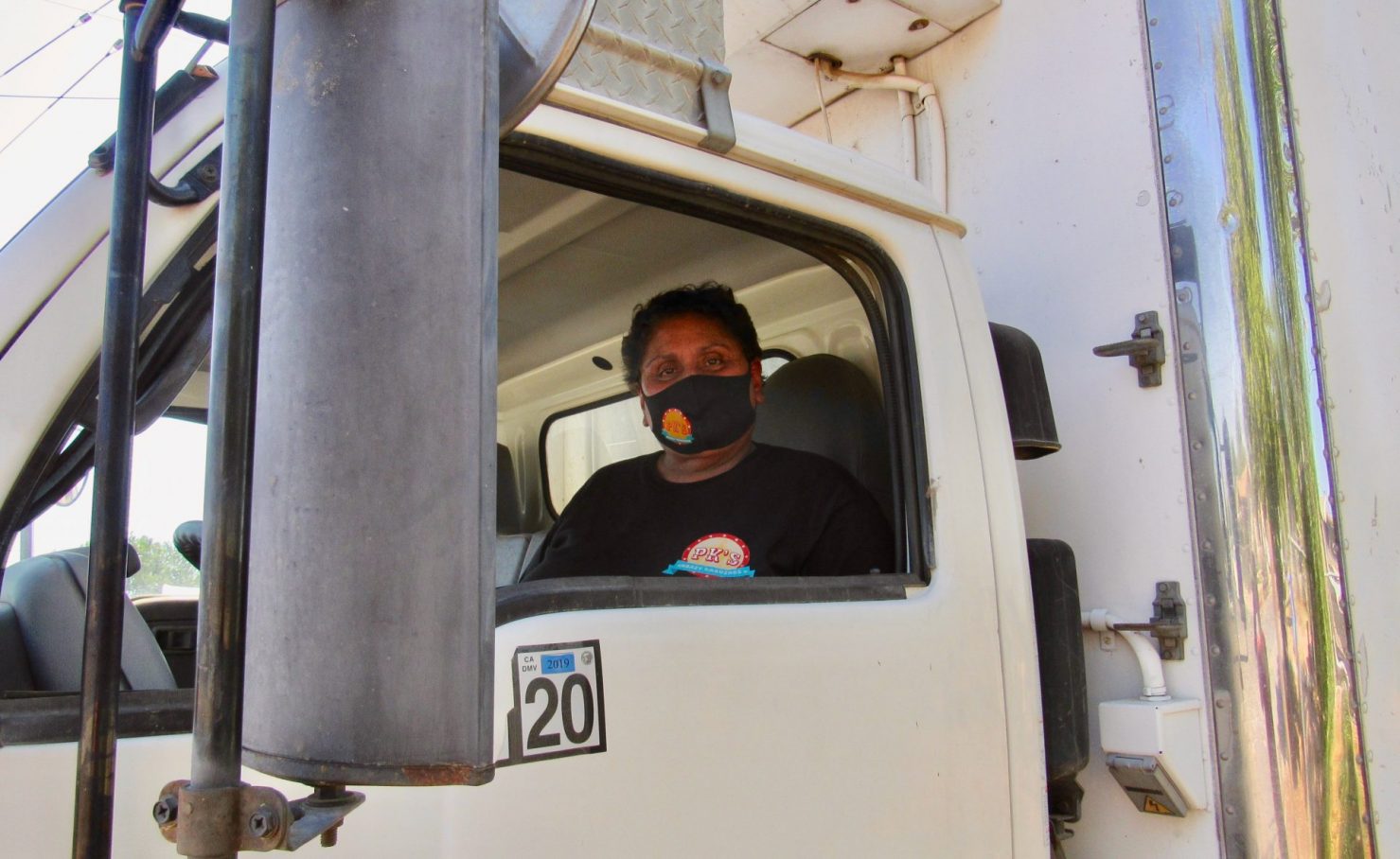 Holtville resident Patty Kopka, owner of PK’s Hand Pop Kettle Corn and Lemon Shakers, sits behind the wheel of her “new” used work truck that she raised funds to buy through community donations, after her previous work truck was destroyed by fire on July 4 just outside Yuma. | MARCIE LANDEROS PHOTO
Home
Business
In BusinessFeatured StoriesLocal News

HOLTVILLE — During Independence Day afternoon, Patty Kopka was driving her work truck east on Interstate 8, heading toward Yuma’s Civic Center for its July 4 celebration, where she planned to sell her sweet treats and beverages.

Patty never made it, though, her dream job reduced to ashes when the mobile business burst into flames, leaving her truck and all of her expensive equipment fully engulfed on the side of the freeway.

Yet like the mythological phoenix, PK’s Hand Pop Kettle Corn and Lemon Shakers, has risen from the ashes and is beginning to pop and shake again, with the help of the community.

“I was eight miles away from the Fourth Avenue turn off to Yuma, when I noticed my truck started to lose speed. I quick (sic) put my emergency flashers on and pulled off to the side of the road,” Kopka, of Holtville, wrote of the ordeal.

“I got out of the truck and lifted the hood to see if I was overheating. I looked under the truck when I saw a little water coming out from the engine. I looked up and my cab of my truck was filling up with black smoke,” she wrote. “I had wanted to go into the cab to get my personal belongings, my phone, my hearing aids, and my purse, but the inside of the cab was filled with black smoke and I couldn’t see.

“I got this strange feeling, (and) I turned to my coworker who was driving my car behind my truck. He had just walked up to see what was going on,” wrote Kopka, who is hard of hearing. “I yelled at him to run the truck is going to blow. We both started running and got maybe 10 feet away when my truck burst into flames.”

The coworker Kopka was referring to was Eric Kirby, who quickly called 911. But she said it took about 15 minutes for the fire department to show up from Yuma, and another 30 to 40 minutes to extinguish the fire.

Only the food cart, which had been on a trailer being towed behind Kopka’s truck, survived the fire. Kopka estimated she lost around $30,000 in equipment, including her hearing aids, leaving her struggling to hear until they can be replaced.

“Everything eventually will be replaced,” Kopka wrote of the experience. “I’m just glad that Eric and I weren’t hurt.”

Kopka lives in Holtville now, but she was born and raised in Calexico, and graduated from Calexico High School in 1982. Her parents, Mary and Bill Kopka, owned a Chevron station and Kathleen’s Restaurant and Cocktail Lounge in Calexico.

“My Chihuahua ended up eating some jalapeño kettle corn and she loved it. Because of her, I decided I would try and sell it. She was my inspiration to start PK’s,” Kopka said.

PK’s, of course, would be Patty Kopka’s initials, in case you haven’t caught on by now.

As Kopka sifted through the ashes of her truck, she made the decision not to give up, but to rise again.

“Once it was safe to walk up to my truck, I noticed my popcorn popper didn’t melt (so) I took that as a sign,” she explained. “That I wasn’t going to let PK’s die.”

Kopka and her team started to fundraise to replace the work truck and equipment. They began a GoFundMe for PK and selling plates of food. On Aug. 7, her team’s work paid off when she was able purchase a “new” used work truck for her business.

“The support from my team and the community has been amazing. People have been donating supplies, volunteering their time to help out at our fundraiser, donating to the GoFundMe, sending money donations and many have purchased food plates,” Kopka wrote. “Thanks to the community, I was able to make enough money to buy another work truck!”

Kopka could not express enough her gratitude to the community who helped to raise her up.

“We’re coming back stronger than ever!” she stated with enthusiasm. “It’s going to take a while to replace all the equipment, but we will continue to work with what we have. We have been very blessed and fortunate people have been reaching out to us.

“PK’s has the best customers.”

Next
GILGAR: IID ECA Hike Due to Rising Costs