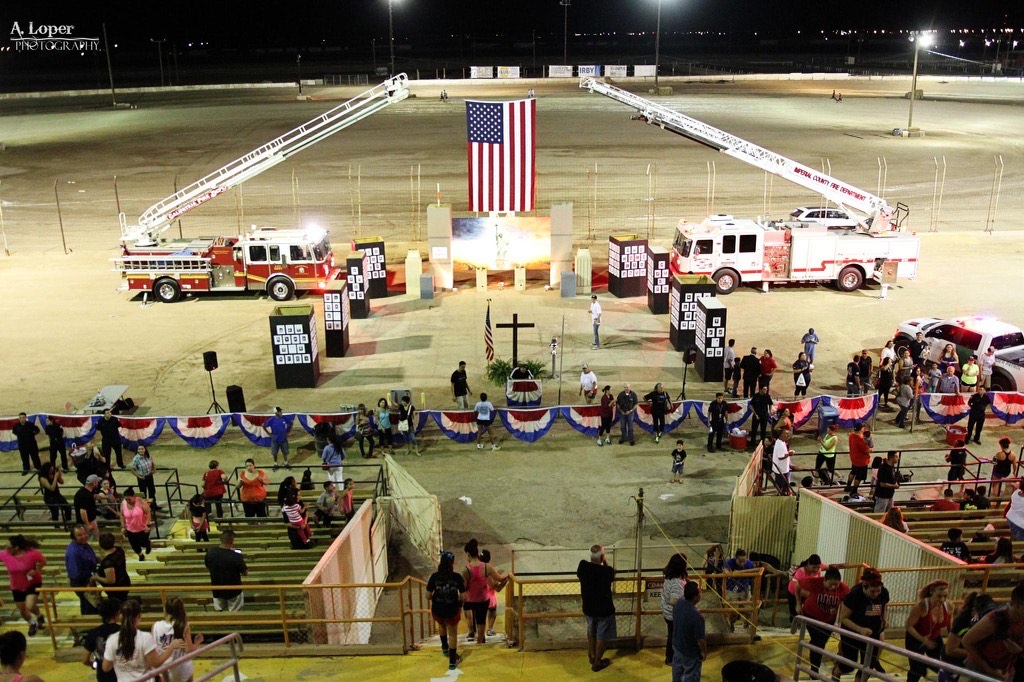 IMPERIAL — This year marks the 20th anniversary of the 9/11 terrorist attacks in New York City, which resulted in the World Trade Center’s Twin Towers collapsing and many innocent lives lost — 2,996 to be exact.

The impact and influence of that fateful day has not been forgotten — over the years, communities have put together their own rendition of a remembrance to honor the people whose lives were cut short, and to provide support for the families left behind in the wake of that horrific day.

Starting at 8 p.m. on Saturday night, Sept. 11, the annual 9/11 Memorial Event and Stair Climb will get underway at the Imperial Valley Fairgrounds grandstand area with an opening ceremony at 7:45 p.m., where the concrete grandstand steps will stand in to represent the equivalent of the 110 stories of the World Trade Center, said Tiffinie Macias, business assistant for the I.V. Fairgrounds in Imperial.

Eight years ago, Mathew Zinn, a firefighter with the El Centro Fire Department, approached Macias about hosting their own community remembrance to benefit the National Fallen Firefighters Foundation.

National Fallen Firefighters Foundation is a nonprofit organization with programs that help serve and support firefighter families. One of the ways that the 9/11 firefighters are remembered is by a “stair climb” event, and this entails participants climbing or walking the grandstand steps.

Proceeds from the event go to not only the programs of the NFFF, but also the FDNY Counseling Services Unit, according to information from the event host, the IV 9-11 Committee and I.V. Fairgrounds.

Though last year’s event was held virtually, due to COVID-19, the committee hopes to have 412 climbers to represent the first responders who lost their lives, which includes 343 firefighters, 60 police officers, eight emergency medical technicians, and one patrolman, Macias said.

Each participant will be presented with a badge that holds a name and photo of one of the first responders that lost their lives that day, so that they know for whom they are climbing. Fire departments from each city participate in the stair climb and do so in their firefighter turnout gear.

The San Diego stair climb has been cancelled this year, but Macias anticipates other firefighters, families and people outside the Imperial Valley will come to the local event to pay tribute this year.

Early registration for the event is $25 and lasts through Friday, Aug. 27, and can be done online at https://nfff.akaraisin.com/ui/imperial