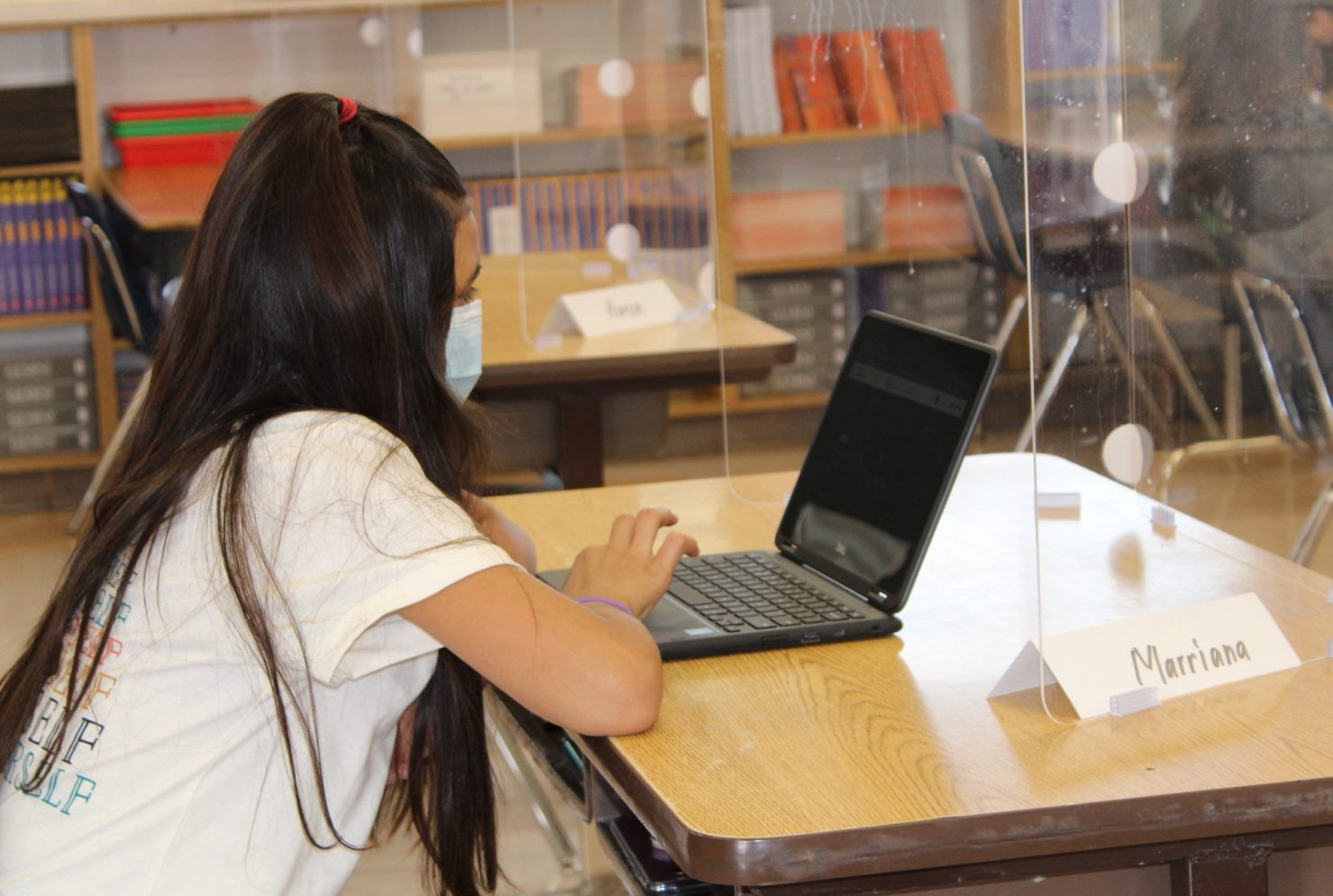 A student works on a laptop. Much of the independent study program, while not virtual in the sense of online learning, is done over computer devices from home. | KATHERINE RAMOS PHOTO
Home
COVID-19
In COVID-19EducationRegional News

Between Brawley Elementary and Calexico Unified, Nearly 500 Students Are Enrolled

Though Imperial Valley schools have returned to in-person full-time instruction amid surging cases of COVID across the country, there are many parents who are hesitant to send their children back to campuses, considering children under 12 still cannot be vaccinated.

For these apprehensive families, the only option is independent studies. As per Assembly Bill 130, schools in California are required to provide an independent study model for the 2021-2022 school year. The requirement does not apply to charter schools.

It’s unclear how many Imperial County students are already taking advantage of the model, but according to the available data, as of Tuesday, Aug. 24, nearly 500 students were already enrolled between the Calexico Unified School District and Brawley Elementary School District.

Some 388 students have been enrolled in independent studies in Calexico, nearly 200 for Brawley Elementary, and another 90 at the Central Union High School District.

Although some campuses are saying their numbers are capped, AB 130 mandates this as an option.

Central Union Superintendent Ward Andrus explained on Thursday, Aug. 26, that if or when the numbers go up, teachers and staff must be moved to accommodate for the rise in independent study enrollment, as his district, at least, tries to maintain a ratio of a certain number of students to staff.

Students in the Holtville Unified School District are being giving the option of the independent study model through the district charter school, Freedom Academy of Imperial Valley, a kindergarten through 12th-grade alternative to traditional classroom settings.

“We have a lot of students who do that because they might be working, or if they have other things going on,” Holtville High Principal Anthony Arevalo said in an interview on Monday, Aug. 23. “It gives them a lot of flexibility to not have to be in a traditional classroom setting from 8 to 3.”

At the Central Union High School District, there is the Central Union Virtual Academy. This virtual school also operates under an independent study model, with students meeting with their teacher in person or virtually each week. Andrus said Thursday this model is just getting going.

Unlike distance learning, the model that most schools followed during the 2020-2021 school year, independent study will not be as hands on with students.

Most districts in the Imperial Valley will be following the same guidelines for their independent study programs, per state mandate.

Students will have to be actively participating in schoolwork through live interaction, synchronous instruction, assignments, and assessments. Synchronous instruction includes students meeting with their teachers through either daily Zoom sessions or with their teachers once a week in person. Asynchronous learning is through prepared resources that is done without teacher interaction, usually done by student alone.

Live interaction can be either in person or telecommunicated and includes interaction with peers and school certificated or classified staff that can be used to make wellness checks, progress monitoring, provision of services, and instruction, according the program information.

Parents will be required to provide daily instruction according to the weekly learning plan assigned by the teachers. They will have to provide informal check-ins and progress reports for their students.

Students can be disenrolled due to lack of participation and put immediately back into in-person learning, according to the general provisions of the programs.

Independent study has been seen as a good option for students who have underlying health concerns, parents who are trying to keep other family members healthy, or families who are just trying to avoid catching COVID altogether. There is also an option to return to school if families make the request. However, if there is no room at the student’s neighborhood school, they will be placed where there is room.

Families are being encouraged to place their children in the regular in-person learning at schools. The benefits include improved students learning and the physical interaction that is needed through schools.

Students will also not have access to the same extracurricular activities as other students nor recognition assemblies under the independent study model.

For example, Calexico Unified officials have stated that children in independent studies will not be able to participate in clubs or band. English learners are highly recommended to be in school for direct instruction to encourage bilingualism.

Students who are in special education are to not be enrolled in independent studies due to the need to have one-on-one assisted learning accessible, according to program information.

As put forth by the California Department of Education, the independent study guidelines require, but are not limited to, a minimum amount of synchronous instruction, a provision to ensure all pupils have access to the connectivity and devices adequate to participate in their educational program, IS offering requirements, a provision for waivers of the offering requirements, required parent notification, pupil-parent-educator conferences, and additions to board policies and written agreements.

Yet according to the state guidelines, these steps are only the most basic of offerings for students who choose independent study.

To check availability, parents should contact their respective school districts or school sites.

(This story was updated at 8 a.m. Friday, Aug. 27, to include information from Central Union High School District and clarify some other information.)