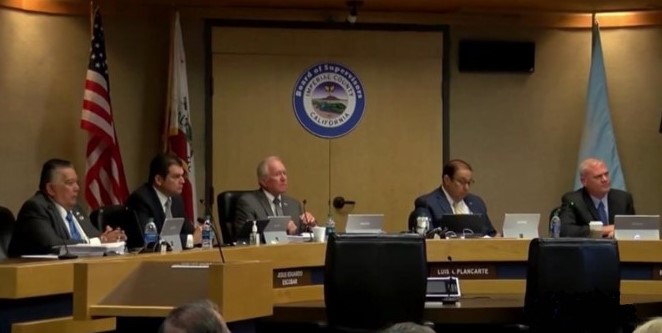 The Imperial County Board of Supervisors listen during a past meeting in board chambers in El Centro. | COURTESY PHOTO
Home
Regional News
In Regional News

Imperial County department heads got a chance to plead their cases on whether they should get more funding.

The Board of Supervisors held its annual budget hearing on Tuesday afternoon, Aug. 24 to listen to appeals from county officials dealing with individual departments’ budgets.

The county board already gave initial approval for a fiscal 2021-2022 budget totaling $692.7 million, but staff Tuesday brought forth recommendations on changes. Of that budget, there’s a $118.8 million general fund, $437.4 million special revenue fund and $136.5 million in all other funds.

This change included a $108 million decrease in the general fund, much of which is due to the Department of Social Services changing from general fund to special revenue fund classification.

On Tuesday, department heads also got a chance to appeal denials to changes in their budget.

The department with the most budget augmentations that went before the board was the District Attorney’s Office.

The District Attorney’s Office asked for a variety of things, including increasing attorney stipend, of which the board had already approved but had not allocated funds for, adding bilingual allocations, promoting some positions, and transferring some investigator allocations to a different budget unit. Much of that has already been done but has been covered by cost savings from vacant positions, Assistant District Attorney Heather Trapnell said.

“So, you don’t even need to bring this to the board,” Chairman of the Board Michael Kelley said. “You’ve been paying for it.”

“We have, but it feels like we should, so somebody knows this is happening,” Trapnell said. “… I think we need to be honest with the board instead of pretending (these issues don’t) exist.”

Many of the items were approved with no impact to the general fund, while a report is set to be brought back in the coming weeks about how this will impact the District Attorney’s budget.

Some other items were approved as well, including an $11,000 hit to the general fund in the form of more money for indigent burials. More funding is needed to deal with an increased need for the program, said Sarah Enz, acting public administrator. She asked for an additional $11,277 in increased allocation as the program doesn’t receive any grant funding.

Board members asked if the department had tapped any local nonprofits for assistance. Enz said “no,” but added that other forms of funding had been looked into.

Eric Reyes of Brawley said if it’s something the county needs, to keep doing it; he’s sure local nonprofits would be able to come up with the funds.

Supervisor Raymond Castillo motioned for the funding to come from the county, whether it be from American Rescue Plan Act funds or from the general fund.

Supervisor Jesus Escobar was concerned about the budget as a whole, and asked staff to build an overall strategy for what American Rescue Plan Act funds, and the county budget in general, should be used for. He asked for a “viable plan for our fiscal future.”

“We’ve got to put everything on the table, what is essential and nonessential,” he said.

The board is set to approve a final budget with the changes made Tuesday in September.