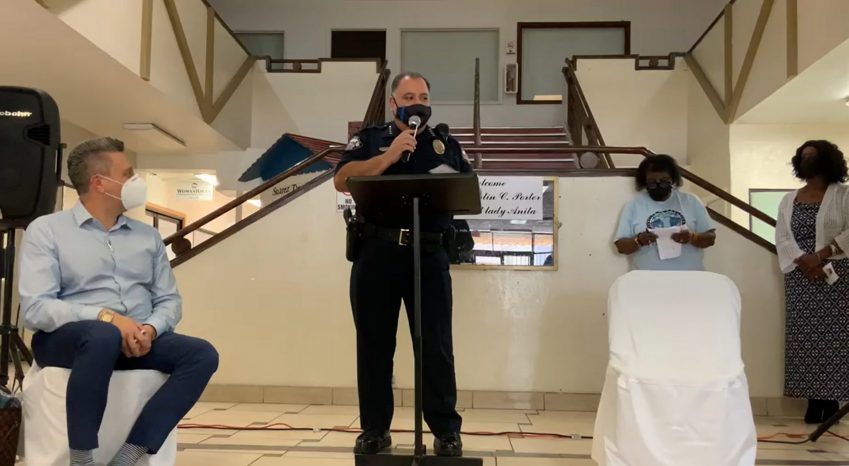 CALEXICO — After a 30-year career with the Calexico Police Department, Chief Gonzalo Gerardo has announced his retirement, effective in December when his current contract with the city ends.

Gerardo made his decision known to the city manager in a letter of resignation on Aug. 16, and told individual Calexico City Council members soon after, but he didn’t make the decision widely known until Saturday, Aug. 28, when he informed his staff that morning and distributed the letter of resignation.

The chief then made his first public announcement during an event to welcome the new pastor of the Johnson Chapel-African Methodist Episcopalian Church held by the Imperial Valley Social Justice Committee.

“I’m going to make an announcement next Wednesday (Sept. 1) … I plan to retire this year after 30 and a half years of service for the city,” Gerardo said in the midst of a three-minute speech welcoming the new pastor. “But I’m not going anywhere.”

For one, Gerardo said in an interview later Saturday afternoon, that he wants to help the city choose its next chief and is offering his extended services on a limited basis past his December retirement, to the extent that his retirement from the city allows.

Although not on the Calexico City Council agenda for Wednesday, Sept.1, chief and Calexico City Manager Miguel Figueroa said that it was their intent to see the chief read his letter to the community during the public comment/department reports portion of the meeting.

Figueroa said on Saturday that the city will conduct a thorough search for the chief’s replacement will start soon, as the chief’s contract gives the city time to find the right person.

Gerardo spoke at length with the Chronicle on Saturday regarding his retirement, his time with the city, and his plans for the future. Look for the more in-depth story online Sunday, Aug. 29.