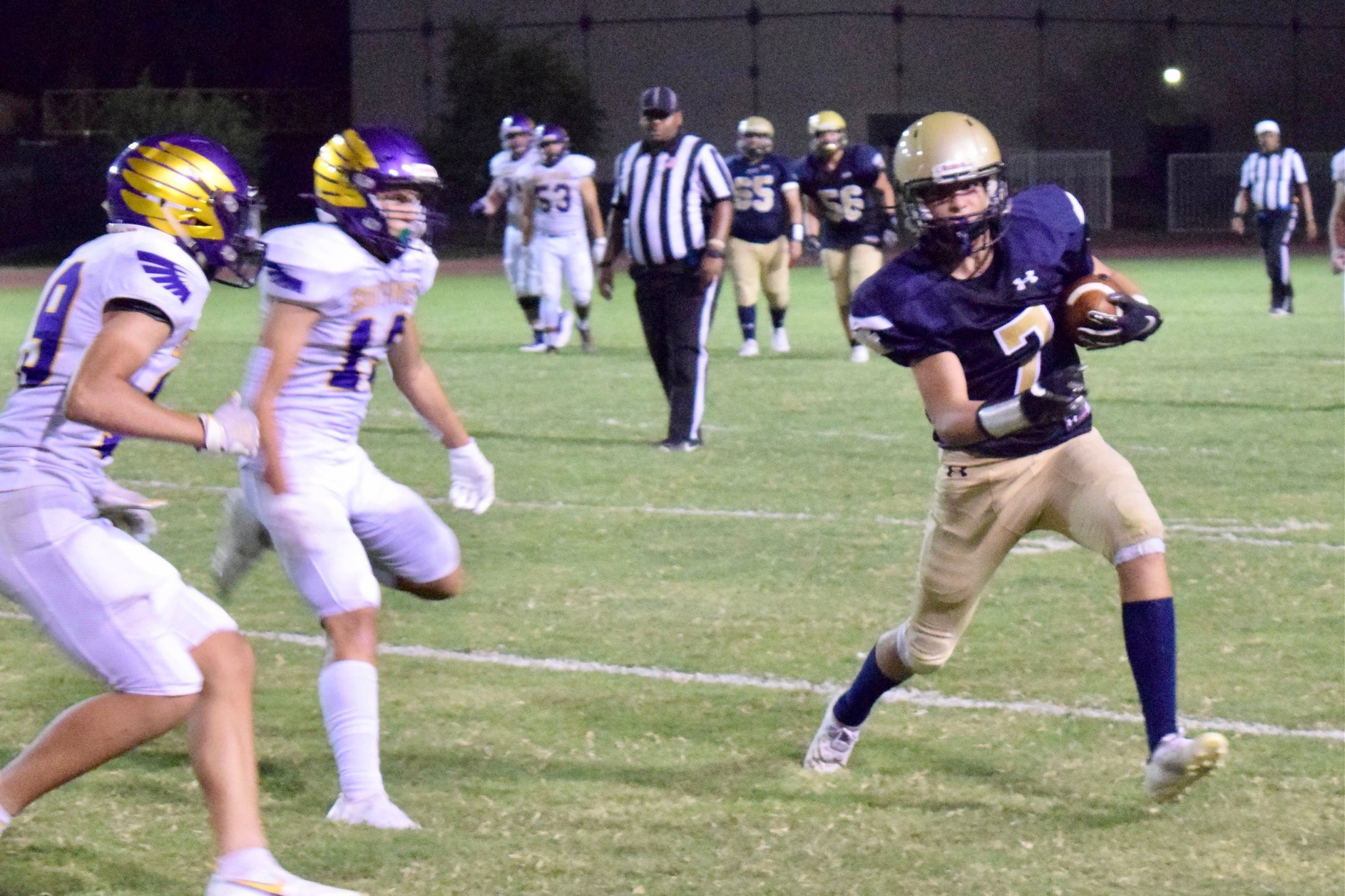 Elias’ elusive running gave the Scots a 27-14 lead in the fourth quarter, but two late Southwest touchdowns, including the game-winner with just 11 seconds left in the game, gave the Eagles their first win of the season, 28-27.

Elias stole the show for the Scots, throwing two touchdown passes and running for two more, including a 45-yard jaunt that saw him break several tackles on his way to the end zone.

“He’s a very smart player. He knows football, he’s a playmaker,” Santana said about the young quarterback. “I think he’s going to be great.”

Elias is not the Scots’ starting quarterback, as senior Diego Elorduy is the Scots starter under center. However, an injury to Elorduy in last week’s game against San Diego High limited his practice time this week and his playing time against Southwest.

The Scots held their own against a bigger Eagles’ squad, despite having an inexperienced team. Vincent Memorial has only five returning seniors and 13 juniors who haven’t seen much playing time, along with four sophomores and five freshmen.

“We did pretty well for three quarters,” Santana said. “But you have to play for four quarters.”

The Eagles jumped out to an 8-0 lead when Eagles’ sophomore quarterback Logan Jungers threw to sophomore wide receiver Jonah Estrada for the first score of the game. After a successful two-point conversion, the Eagles led with 7:18 left in the first quarter.

The Scots answered immediately, with Elias’ 45-yard scamper. He added the two-point conversion with a run to tie the score with 4:33 left in the first quarter.

Vincent Memorial seemed to take control of the game in the second half. The Scots opened the third quarter with a 25-yard touchdown pass from Elias but was negated by a crack-back-block penalty. The Scots still scored on the drive thanks to a 25-yard pass from Elias to junior wide receiver Armando Apocada. They missed the extra point and took a 14-8 lead with 8:49 left in the third quarter.

Elias returned the favor with an 18-yard touchdown run with 8:05 left in the third. After a missed extra point, the Scots led 20-14.

The momentum changed when Southwest sophomore Enrique Cervantes stripped the ball from the Scots during a running play, with 9:25 left to play. The Scots had just intercepted the ball and things seemed to be going their way.

Cervantes’ strip and recovery gave the Eagles a short field to work with and draw to within 27-21.

In the final series, while the Eagles were still down 21-27, and knocking at Vincent Memorial’s 11-yard-line with 18.5 seconds left in the game, the Scots’ inexperience showed.

Vincent Memorial had too many players on the field and was penalized five yards. That moved the Eagles to the Scots’ 6-yard-line for the eventual touchdown pass and game-winning extra point with 11 seconds left.

“We really helped them out on that score,” Santana said. “Especially because we came out of a time out … we have to be smarter.”

The Scots, who dropped to 0-2 with the loss, host El Cajon Valley High at 7 p.m. Friday, Sept. 3, at Southwest High in El Centro in a nonleague game.

Southwest recorded its first win since 2019, now sits at 1-1 on the young season and travels to San Diego at 7 p.m. on Friday, Sept. 3, to face University City.